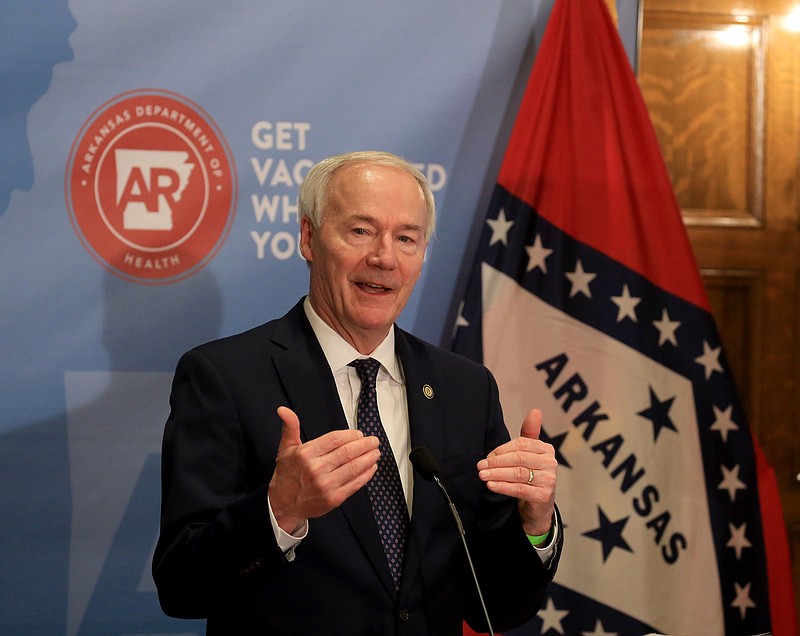 The primary focus of Gov. Asa Hutchinson’s weekly COVID-19 update, which was held Tuesday at the state Capitol building, was the hesitancy of some Arkansans to get vaccinated.

“Obviously we have a challenge with vaccine hesitancy, and I think that hesitancy in Arkansas is partly because the threat is perceived as being down. As new cases go down, as hospitalizations go down, as you see people relaxing and trying to lead a more normal life, the threat is not with us every day, and so the urgency of getting a vaccine has been diminished,” Hutchinson said.

He noted that on Monday, the state announced the reinstatement of the Johnson & Johnson COVID vaccine, also referred to as the Janssen vaccine. The state paused use of the vaccine on April 13 after several reports of a severe blood clot disease that did not respond to traditional treatments surfaced nationally.

Arkansas Department of Health Secretary Dr. Jose Romero, who chairs the United States Centers for Disease Control advisory committee on immunizations, said in total, 15 cases of the clotting disease were reported in the U.S. After a review of the data and communication of different treatments for the disease to physicians was complete, the CDC announced that it would resume use of the Johnson & Johnson vaccine on April 23.

“It was determined that the risk-benefit ratio — that is, the benefit as opposed to the risk — far outweighs the use of the vaccine. The adverse event, this occurrence of clotting, occurs so infrequently, rarely — very, very rarely — that is safe to use the vaccine,” Romero said.

However, he noted that no Arkansan who wishes to be vaccinated will be forced to use the Johnson & Johnson vaccine.

“There are alternative vaccines for people who don’t want to take that risk,” he said. “We in the Health Department will make alternative vaccines available at sites where we’re using the Janssen vaccine. But, the Janssen vaccine is safe, it’s effective and it’s a one-time vaccine, so keep that in mind, and I encourage you all to get vaccinated with whatever vaccine you feel comfortable with.”

He encouraged leaders in the community, both the public and private sectors, to get involved in the vaccination campaign.

“We want to call upon our employers to provide leadership. They’ve done a good jb, but we want you to continue in the fight. We want you to provide time off as necessary for an employee to get the vaccine. We want you to provide education to the workers as to the importance of it, and then give them access to it,” he said. “We want to continue to rely upon physicians and our out-patient clinics. They have a growing supply of vaccines. They are a trusted provider; that’s who the patient is used to going to and they will be there to guide whoever their patient is to the right place ot get the vaccine.”

He also encouraged schools to reach out to local vaccine providers to schedule vaccine clinics for students who are eligible for vaccination.

“This is what we’re giong to have to do. Communities need to engage,” he said. “We’ve got to get it out there as easy as possible for people to get the vaccine.”

“They’re becoming more prevalent … and this is only the tip of the iceberg, because we’re only sequencing a very, very small minority of the people who are sick,” he said. “The more people that are un-immunized, the more there is a chance for this virus to spread and to continue to mutate, so we could see newer variants if we have a large enough population of individuals not vaccinated.”

Danyelle McNeill, a spokesperson for the ADH, explained that the department monitors for COVID case “clusters that could indicate a variant of concern” as well as for cases in individuals who become ill with COVID after being fully vaccinated for the virus and send samples from those cases to the CDC for variant testing.

In Union County, between one and four cases of “variants of concern” have been identified, she said.

Hutchinson highlighted the plateau of new cases and hospitalizations caused by the virus seen since around March 8, and said he doesn’t wish to see Arkansas have a new wave of the virus because residents aren’t being vaccinated.

“We watch that very carefully, and we do not want to be a Michigan; we do not want to see an acceleration of those cases, so we either get vaccinated or take the precautions to protect you from the spread of COVID-19,” he said.

Several vaccine clinics are scheduled this week in Union County, all utilizing the Pfizer vaccine.

The Medical Center of South Arkansas is also offering “Walk-in Wednesday” today from 8 a.m. to 3:45 p.m, where walk-in vaccine appointments will be taken. All vaccine-eligible Arkansans, including teenagers who are 16 and 17 years old for whom only the Pfizer vaccine has been approved, will be served there.

The COVID vaccine is being administered at no cost to patients. Those with insurance are asked to bring their cards to their vaccine appointment, but there will be no out-of-pocket costs charged to those who receive the vaccine.

Hutchinson noted that more new COVID cases were reported Tuesday than were the Tuesday before; hospitalizations, however, did drop between Monday and Tuesday. Testing remains modest, he said.

“We are encouraged by the fact that our hospitalizations have remained low,” he said. “(Testing is) fairly consistent. It’s at a low level. People who see a need, they get tested, or if they come back from travelling.”