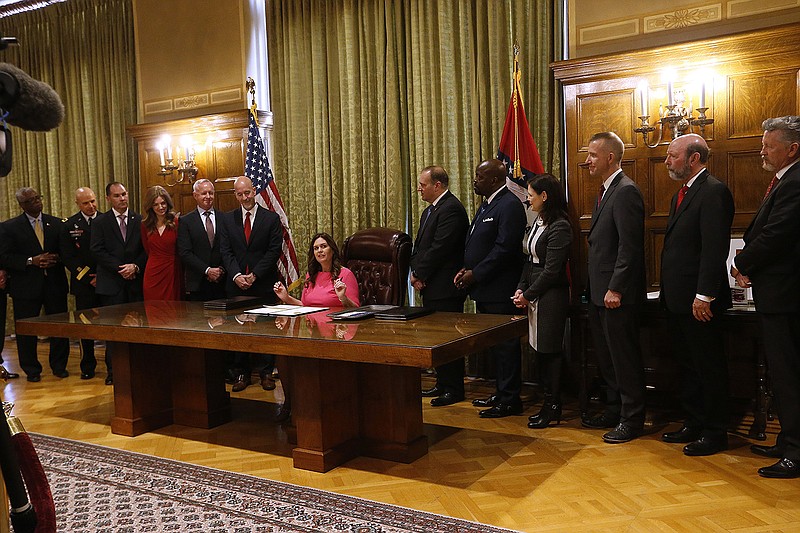 "I think it is really important that we start limiting the expansion of government," Sanders said during a news conference Tuesday.

The Republican governor said the executive order she signed "will stop government hiring and [institute] a promotion freeze and make sure that we are actually looking for ways to reduce the size and scope of government in the lives of Arkansans and prioritize making things more efficient and returning that savings to the taxpayer."

During Hutchinson's administration from 2015-2023, the number of employees in the executive branch dropped by nearly 3,000, according to Department of Transformation and Shared Services' records.

It directs the Department of Transformation and Shared Services to implement the order across the departments, which the department is in the process of preparing guidance, she said.

Asked whether there is a particular numerical goal that Sanders has for cutting executive branch employment or a benchmark, Henning said, "As the Governor said in her joint address to lawmakers, one of her priorities is to cut wasteful spending and not grow government."

Asked whether Sanders has made a decision about a proposal made by Hutchinson to overhaul the state's pay plan at an estimated cost of $41 million a year in general revenue in fiscal 2024 that begins July 1 or whether that's a decision to be made in the future, Henning said, "The Governor continues to engage with her legislative partners as she develops a budget that makes government lean and efficient, cuts taxes, and prioritizes the vision she laid out in her inaugural address."

Sanders' executive order states it applies to all vacant positions existing on or after Jan. 10 at all state entities, as defined by Arkansas Code Annotated 25-43-103.

The hiring and promotion freeze does not apply to any positions authorized by the Department of Public Safety, Department of Corrections and federally-funded public employment efforts, according to the executive order.

Unlike Hutchinson's executive order, Sanders' order specifies that state entities "shall terminate all ongoing hiring processes that have not yet resulted in a formal offer of employment being extended to a candidate," and that state entities may only conclude hiring processes that have resulted in a formal offer of employment extended to a candidate, if the candidate has previously accepted the offer within 30 days of the executive order's date, and the secretary of the department, or head of the state entity, approves.

Like Hutchinson's executive order, Sanders' order states that entities "shall refrain from filling vacant positions -- including replacement positions and newly budgeted positions -- unless it is determined that a legitimate business need requires the position to be filled."

Under the executive order, any state entity as defined in Arkansas Code 25-43-103 is required to submit requests to fill vacant positions to the Department of Transformation and Shared Services to the attention of the Office of Personnel Management's administrator for the final consideration by the governor's executive review to fill replacement or newly budgeted positions.

Upon determination of the legitimate business need and approval by the governor for filling vacant positions, the vacant positions will be advertised in accordance with the guidelines established by the Uniform Classification and Compensation Act under the executive order.

Before Sanders signed seven executive orders Tuesday, including the hiring and promotion freeze executive order, she said "I made very clear in my inaugural address a few minutes ago that we were not going to take things slowly and that we were getting to work right away."

During the past decade, state government's total number of state employees either declined or increased slightly in most fiscal years, according to Bureau of Legislative Research records.

The number of full-time state employees increased by 108 in fiscal year 2022 that ended June 30 to slightly more than 57,000 as their ranks grew at the state's higher education institutions and numbers declined at state agencies, according to the bureau's records.

The 1,674-employee decline in fiscal 2021 under Hutchinson was the largest drop over a fiscal year since Act 110 of 1985 started requiring agencies and higher education institutions to report employment.

The largest previous decline was 754 employees in fiscal 2018, also under Hutchinson. The ranks of full-time state employees have declined in four of the past five fiscal years.

The ranks of full-time employees declined for the first time in fiscal 2011 by 71 and then again by the same amount in fiscal 2014 under then-Gov. Mike Beebe, a Democrat.

The bureau's reports on full-time employees in state government provide a snapshot of general trends in the ranks of full-time state employees, though state entities occasionally make reporting errors that skew the figures. The figures for each fiscal year are based on the bureau's computation of the quarterly average of the last quarter of each fiscal year.

According to the state Department of Finance and Administration, state government's total salary and benefits costs totaled $4.554 billion in fiscal 2022 -- up from $4.222 billion in fiscal year 2021 that the agency reported a year ago.

In November, Hutchinson proposed setting aside $41 million in the state's general revenue budget for fiscal 2024 that begins July 1, 2023, for a new pay plan for state agency employees.

"My pay plan recommendation would make state employee salaries more comparable to the private sector so we can recruit and retain top talent," he said at that time.

In fiscal 2022, he granted executive branch employees a 2% cost-of-living raise in February and subsequently authorized agencies to spend up to 5% of their total personnel costs on merit raises at the start of fiscal 2023, citing the rising cost of living.

In November, Hutchinson proposed a $314 million increase in the state's general revenue budget to $6.33 billion in fiscal 2024, with $200 million of increased general revenue earmarked for public schools to help boost teachers' salaries.