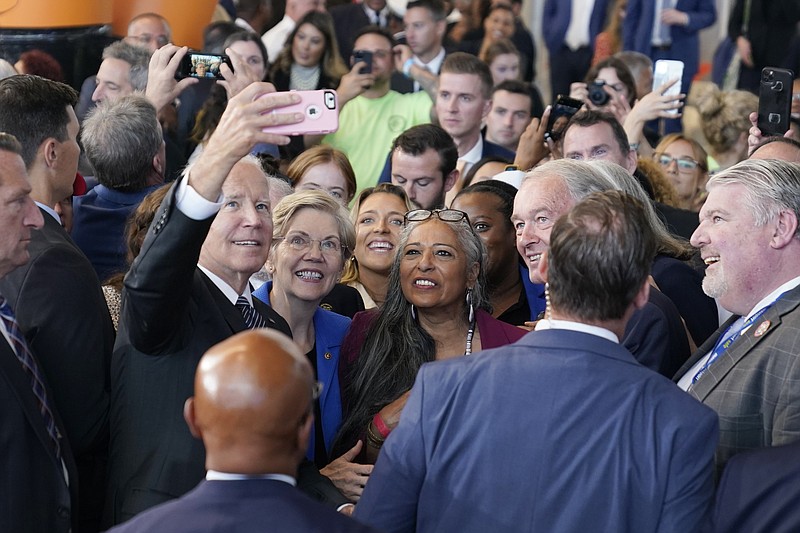 WASHINGTON (AP) -- President Joe Biden has stopped talking so much about inflation worries.

His remarks in Columbus, Ohio, in suburban Washington at a Democratic fundraiser, at a Cabinet meeting and in Labor Day speeches in Milwaukee and Pittsburgh were all missing a once-common refrain about families at the kitchen table straining under the rising costs of food and gasoline.

Biden is attempting to shift the spotlight to his legislative wins, the loss of abortion protections and the threats he says are posed to democracy by the many Republican leaders still under the sway of former President Donald Trump.

When Biden did address inflation in a Monday speech at Boston's airport, he stressed progress, rather than financial pain, on what he says is his top economic priority. Biden has largely put the blame for inflation on global forces such as Russian President Vladimir Putin's February invasion of Ukraine, even as he says his own policies are reducing the burdens of higher prices.

"We're on the right track," the president said Monday, noting the lower gas costs but adding the caveat: "There's more to do, a lot more to do."

The government on Tuesday will release its consumer prices report for August, with economists surveyed by FactSet expecting annual inflation to be at 8.1%. That's down from the 40-year peak of 9.1% in June, but it's well above the Federal Reserve's target of 2%.

"The Fed is going to need great skill and also some good luck to achieve what we sometimes call a soft landing," Treasury Secretary Janet Yellen said Sunday on CNN. "I believe there is a path to accomplishing that."

Still, many leading economists, including researchers who presented this week at the Brookings Institution, warn that bringing down inflation will likely mean layoffs and a drastic rise in the unemployment rate despite Biden's hopes.

There is a risk for Biden in pivoting away from discussing inflation, said Douglas Holtz-Eakin, an economist who has advised Republican campaigns and is now president of the center-right American Action Forum. Holtz-Eakin noted that oil prices have largely fallen as demand from China has waned, something that could reverse in October if that country lifts it coronavirus lockdowns.

He said that Democratic fortunes could ultimately rest on the movements of global energy markets with their mix of geopolitics, corporate profits and financial speculation.

Senate Republican leader Mitch McConnell noted the financial pain being felt by manufacturers, farmers and construction firms in his home state of Kentucky.

White House officials still describe inflation as Biden's top economic priority. The administration released a 58-page economic blueprint last Friday that details its work on infrastructure, climate change, computer chip production and other policies. The blueprint said that going forward, "The president's near-term priority when it comes to the labor market is bringing down inflation without giving up the substantial progress we've made for American workers."

But the president has also gone on the political offensive regarding inflation, noting that the GOP opposed the law he signed last month that limits prescription drug prices, funds climate-related investments, raises corporate taxes and reduces the federal budget deficit.