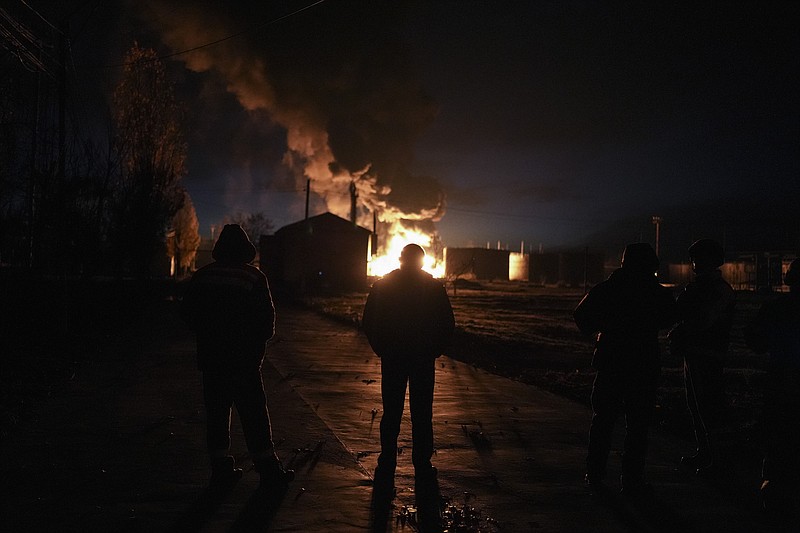 A plume of smoke rises during a fire caused by a Russian airstrike in Kherson, southern Ukraine, Saturday, Nov. 19, 2022. (AP Photo/Roman Hrytsyna)

Rafael Mariano Grossi, the director general of the International Atomic Energy Agency, said two explosions -- one Saturday evening and another Sunday morning -- near the Zaporizhzhia plant abruptly ended a period of relative calm around the nuclear facility that has been the site of fighting between Russian and Ukrainian forces since Russia invaded on Feb. 24.

Fears of a nuclear catastrophe have been at the forefront since Russian troops occupied the plant during the early days of the war. Continued fighting has raised the specter of a disaster.

In renewed shelling both close to and at the site, IAEA experts at the Zaporizhzhia facility reported hearing more than a dozen blasts within a short period Sunday morning and could see some explosions from their windows, the statement said.

Several buildings, systems and equipment at the power plant -- none of them critical for the plant's nuclear safety -- were damaged in the shelling, the IAEA said, citing the plant's management.

Still, Grossi said reports of the shelling were "extremely disturbing." He added: "Whoever is behind this, it must stop immediately.

"As I have said many times before, you're playing with fire!" Grossi said, and appealed to both sides to urgently implement a nuclear safety and security zone around the facility.

Russia has been pounding Ukraine's power grid and other key infrastructure from the air, causing widespread blackouts for millions of Ukrainians amid frigid weather. That has left Ukrainians without heat, power or water as snow blankets the capital, Kyiv, and other cities.

Ukraine's state nuclear power operator said Russian forces were behind the shelling of the Zaporizhzhia plant. Energoatom said in a Telegram post Sunday that the targeted and damaged equipment in the facility is consistent with Kremlin's strategy "to damage or destroy as much of Ukraine's energy infrastructure as possible as" winter sets in.

The most recent strikes damaged the system that would enable the plant's power units 5 and 6 to start producing electricity again for Ukraine, the power operator said. It listed chemical desalinated water storage tanks and steam generator purge system as being damaged in the shelling Sunday, although the full extent of the damage is still being assessed.

The State Nuclear Regulatory Inspectorate of Ukraine decided to bring the two units to a minimally controlled power level to obtain steam, which is critical in winter for ensuring the safety of power units, the plant's staff, the local population and the environment, Energoatom said.

In the central Dnipropetrovsk region, one person was wounded and 20 buildings damaged in shelling of Nikopol, a city across the river from the Zaporizhzhia plant, the report said. Three districts in the northern Kharkiv region -- Kupyansk, Chuguiv and Izyum -- also came under Russian artillery fire in the past 24 hours.

In the eastern Luhansk and Donetsk regions, Russian shelling killed one person in Donetsk and damaged power lines, according to Ukrainian President Volodymyr Zelenskyy's office.

The situation in the southern Kherson region "remains difficult," the report said, citing the general staff of Ukraine's armed forces. Russian forces fired tank shells, rockets and other artillery on the city of Kherson, which was recently liberated from Ukrainian forces, and the settlements of Chervyn Mayak, Kachkarivka, Tokarivka, Chornobayivka and Antonivka.

Shelling late Saturday struck an oil depot in Kherson, igniting a huge fire that sent black billowing smoke into the air. Russian troops also shelled people lining up to get bread in the Kherson regional town of Bilozerka, wounding five, the report said.

In the city of Kherson -- which still has little power, heat or water -- more than 80 tons of humanitarian aid have been sent so far, said local administrator Yaroslav Yanushevych, including a UNICEF shipment of 1,500 winter outfits for children, two 35-40-kilowatt generators and drinking water.

Also on Sunday, a funeral was held in eastern Poland for the second of the two men killed in a missile explosion Tuesday. The other man was buried on Saturday. Poland and the head of NATO have both said the missile strike appeared to be unintentional and was probably launched by Ukraine as it tried to shoot down Russia missiles or drones.

Follow all AP stories about the war in Ukraine at https://apnews.com/hub/russia-ukraine. 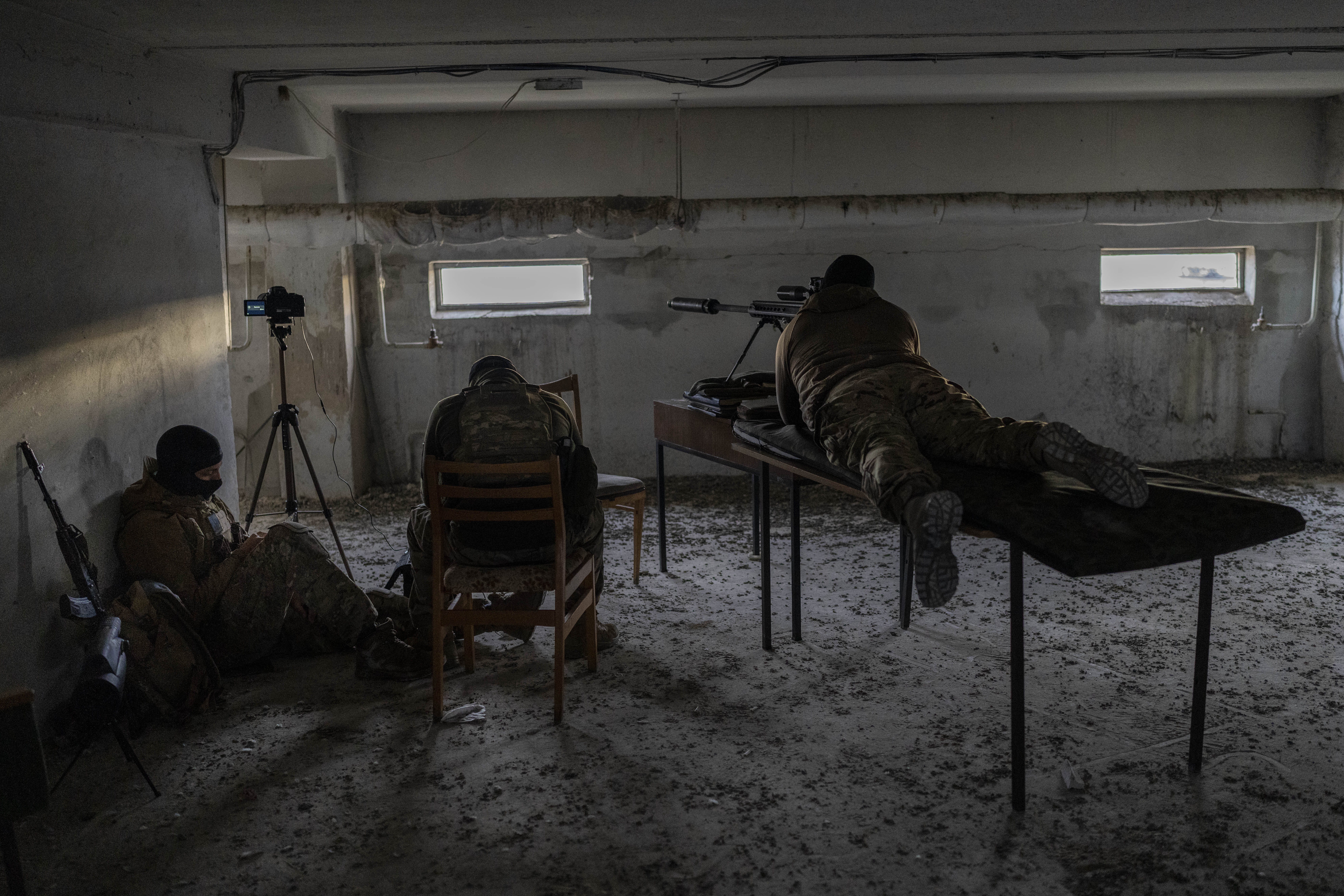 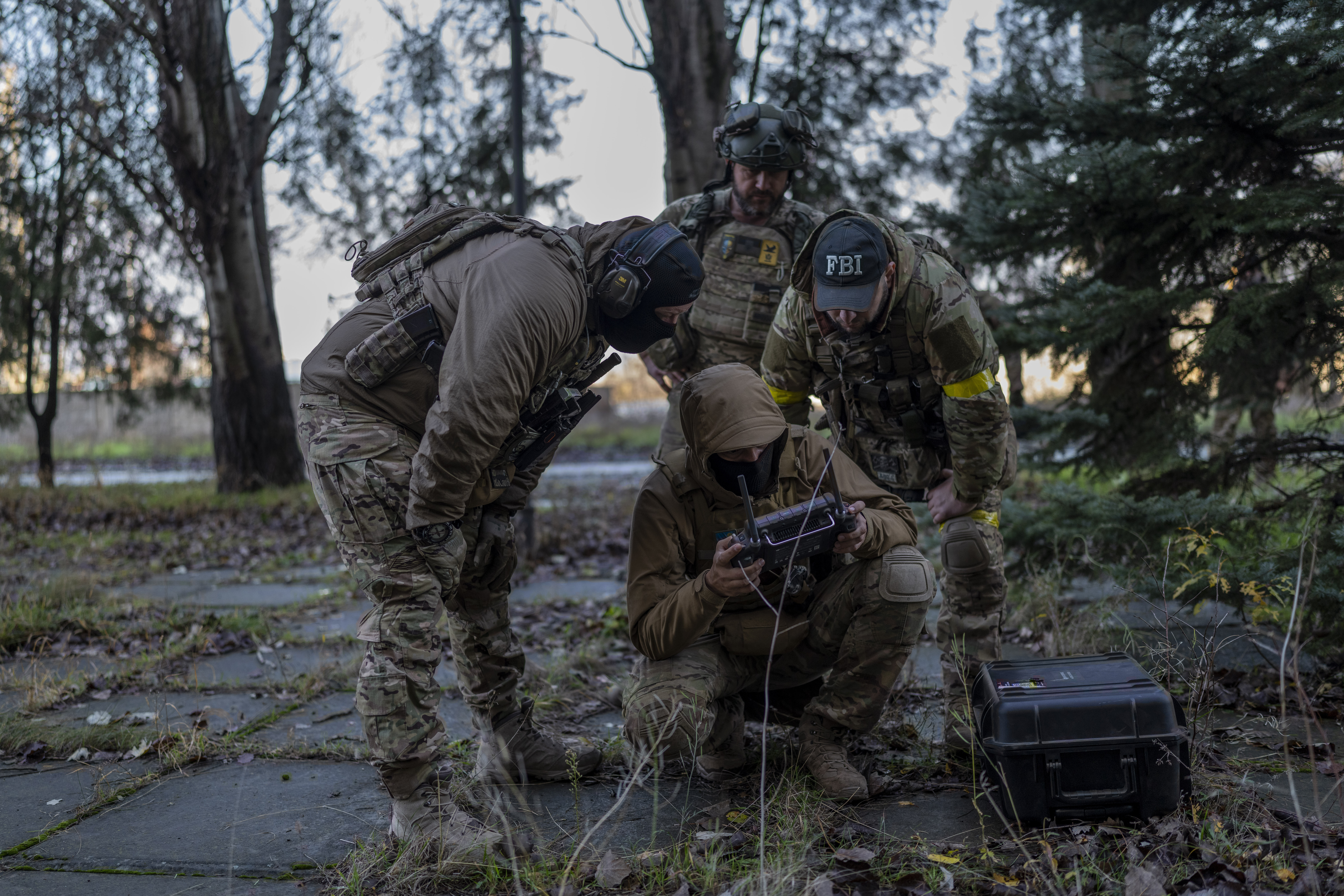 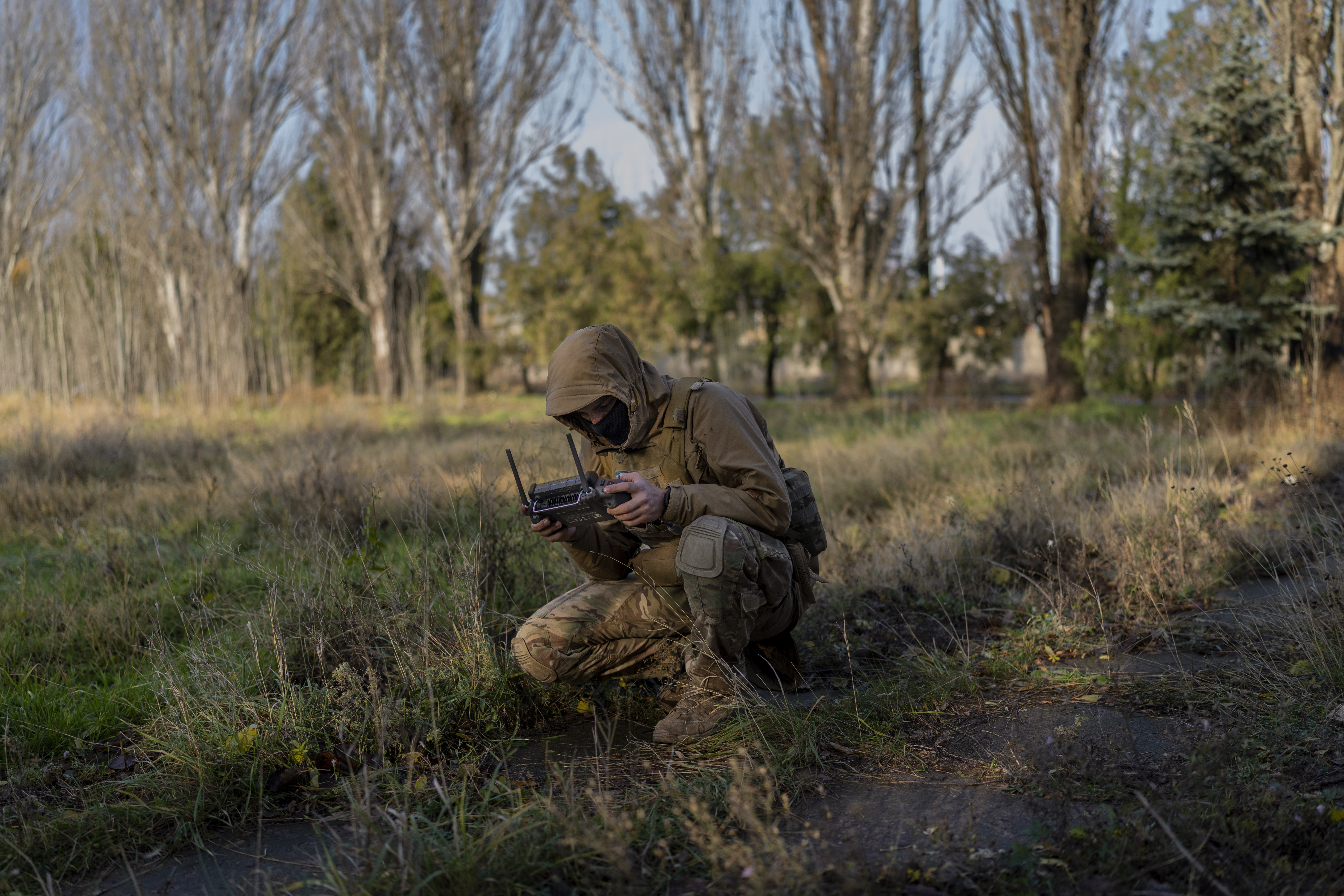 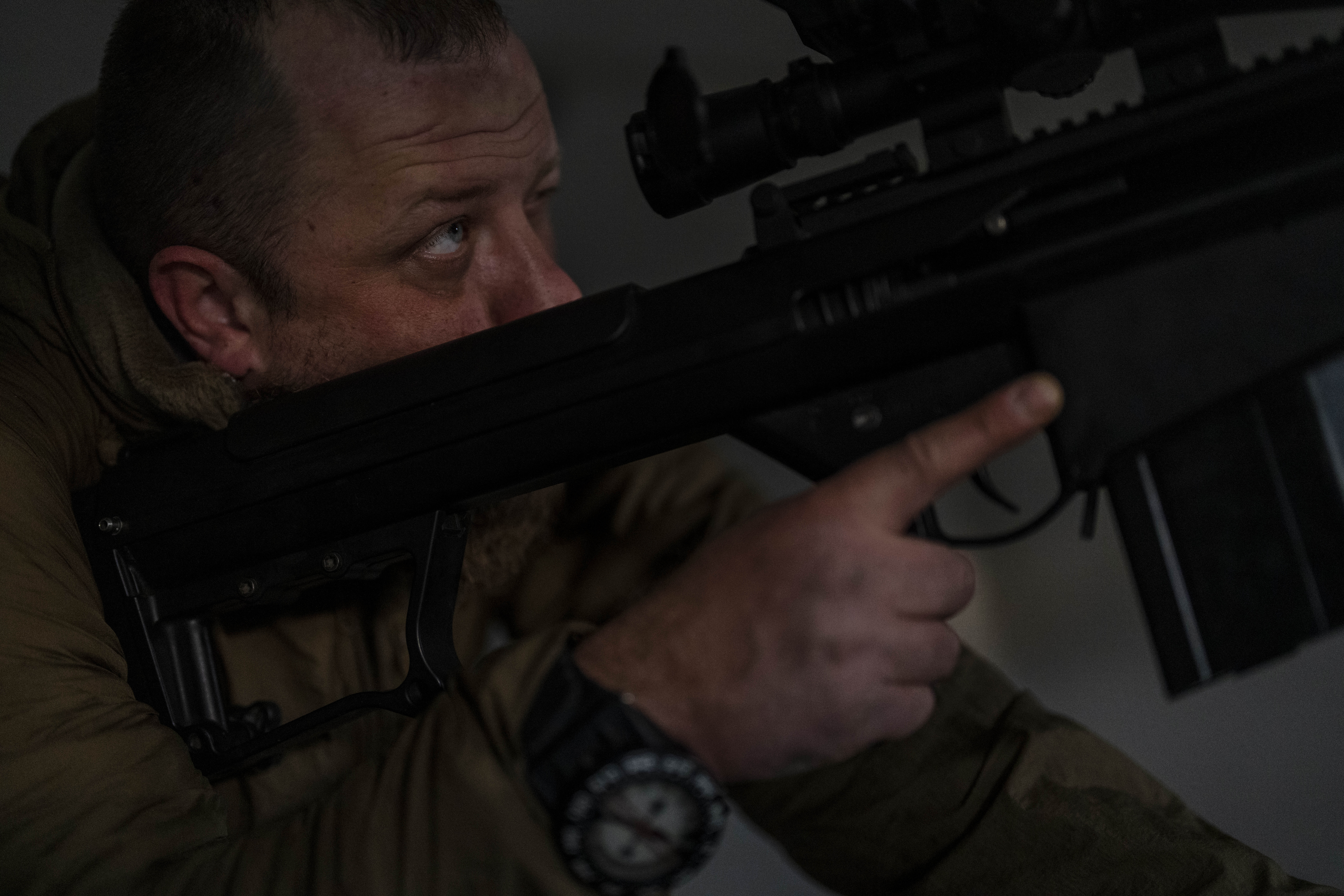 Sniper and commander of a unit in the south, aka Kurt, prepares his weapon during an operation against Russian positions, Kherson region, southern Ukraine, Saturday, Nov. 19, 2022. (AP Photo/Bernat Armangue) 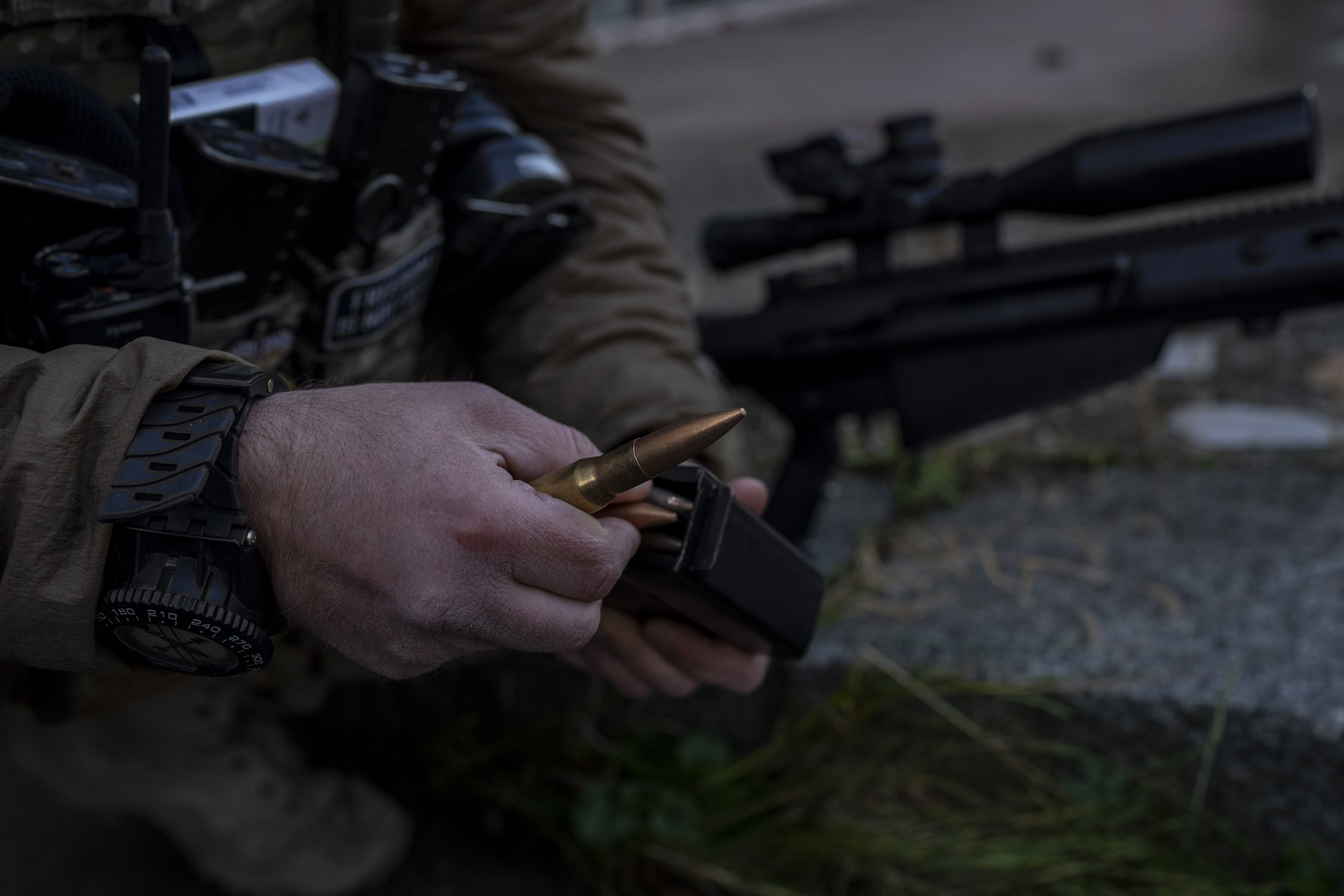 Sniper and commander of a unit in the south, alias Kurt, loads an ammunition magazine during an operation against Russian positions, Kherson region, southern Ukraine, Saturday, Nov. 19, 2022. (AP Photo/Bernat Armangue)