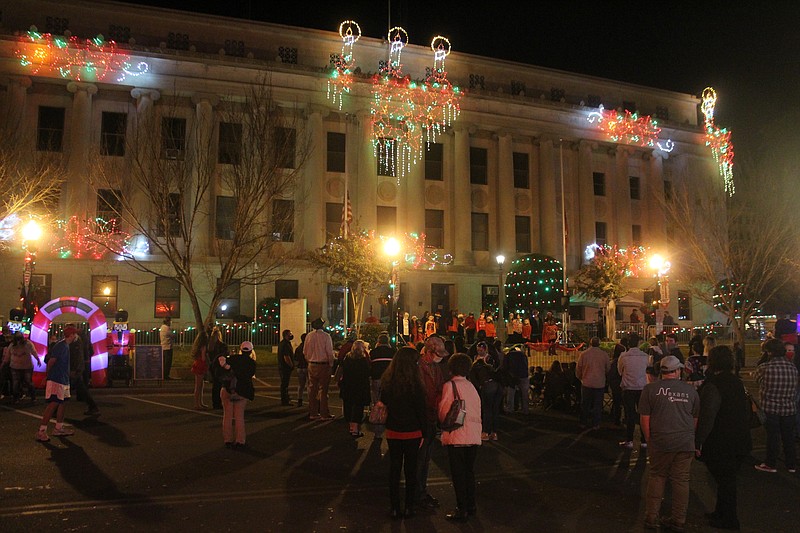 This year's downtown Holiday Lighting Ceremony will also serve as the kickoff for the Salvation Army's Angel Tree program and Red Kettle Campaign. Karl Malone will be a special guest at this year's event, likely being the one to flip the switch on the lights in downtown El Dorado. (News-Times file)

Holiday events in El Dorado will officially kick off Thursday with the downtown Holiday Lighting Ceremony and will continue throughout the season with assistance from the El Dorado Advertising and Promotion Commission.

During a regular meeting Nov. 9, the A&P commission approved a funding request of $9,500 to help offset costs for community holiday events that are presented by Main Street El Dorado.

Beth Brumley, MSE executive director, said the group has planned and is helping to coordinate six events for the holiday season.

The largest expense, Brumley said, is the Holiday Lighting Ceremony, which is set for 5 p.m. Thursday on the east (Jefferson Avenue) side of the Union County Courthouse.

"... which we love doing for the community but it is a big expense on us," Brumley told commissioners.

She said the holiday events help to bring tourists to El Dorado and improve the quality of life for local residents, noting that the events are free.

"And we feel like we're kind of doing it on behalf of the city or the community, so we'd like some assistance with this cost," she said.

Two of the biggest holiday draws are the horse-and-carriage and train rides around the downtown square and Brumley said costs for the services have risen because of inflation and the COVID-19 pandemic.

"Unfortunately, during COVID, we lost our horse and carriage and the train and that's part of the expenses -- we have to rent that to bring it in," Brumley said.

The rides are key selling points in the city's overall Christmas campaign (the 2022 theme is "Best Christmas Ever!") and they, along with appearances by Santa "and other "'touristy' things" supplement other holiday activities, including the El Dorado Christmas Parade and the MAD on Ice ice skating rink, said Brumley.

She said renting out-of-town horse and train services have added to the costs of the holiday events and with the growth of the lighting ceremony, Brumley said MSE cannot accommodate the crowds with its own sound and lighting equipment.

She said the group has turned to MAD to help produce the event this year and costs have crept up for the services.

A&P Commissioner Don Miller clarified that the $9,500 will be used for infrastructure costs to host the events -- costs that are separate from advertising and promoting the events.

Miller was referring to a $15,000 funding request the A&P commission approved in September to promote the "Best Christmas Ever!"

MSE is partnering with the Downtown Business Association and MAD for the advertising push and the groups asked the A&P for matching funds to help roll out the campaign, which will reach into the Central Arkansas and North Louisiana markets.

Each group is contributing $5,000 toward the campaign, bringing the total advertising budget to $30,000.

"So, this doesn't have anything to do with marketing and promotion. It's just an additional expense that, because you're doing this on our behalf -- on the city's behalf -- in attracting tourists?" Miller asked Nov. 9.

He also asked if the events bring in revenue for the nonprofit organization.

"This isn't even a break-even because everything's free. The only thing that has a charge out of all this is the horse and carriage," Brumley said.

"We still pay $2,000, plus the $5 per person, to get them to even come from North Arkansas, which is the closest one we've been able to find," she added.

A&P Commissioner and El Dorado City Council member Dianne Hammond inquired about the $5 charge, asking, "So that goes into their pocket?"

Beth said yes and told commissioners that MSE negotiated the $5 fee from an initial fee of $7 per person.

In response to a question from A&P Commissioner and Mayor-elect Paul Choate, Brumley said the carriage will operate for four hours on Nov. 20 and Dec. 10.

She explained that the asking price is based on an estimate for the number of rides that will be given and that MSE had an option to pay a flat rate or the $2,000/$5-per-person deal, noting that the latter costs less.

"So, they take a risk on their end, if they're really going to get as many trips around as they think they are," Brumley said.

She also said the horse and carriage is booked a year in advance.

"Those are things that are extra and special. You don't do those every weekend when you go downtown," said A&P chairman Barbie Luther.

Brumley also noted that the train and horse and carriage are prominently featured in holiday TV and print ads for El Dorado.

Choate asked when the holiday train will operate and Brumley said free rides will be offered on the same days as the horse and carriage -- Nov. 20 and Dec. 10 during the Downtown Holiday Open House and Santa on the Square events, respectively.

Hammond motioned to approve the funding request and asked which A&P budget line item will be used for the $9,500.

Choate, who also serves as A&P treasurer, and Miller said the commission could amend an existing line item for MSE, with Choate explaining that a contract for services with MSE flows through the general fund.

"We just amend our budget to show that this expenditure has been added," he said.

Earlier this year, the A&P commission allocated $42,000 for MSE as a part of its annual requests for proposals that are considered each January.

In March, commissioners voted in favor of another $17,709 to help MSE promote MusicFest, which was held in October.

Other holiday events include:

• 8 p.m. - midnight, Nov. 24: Black Friday. A select group of downtown merchants will open on the evening of Thanksgiving for Black Friday promotions. MSE and the DBA have said the pajama party-themed event has had a great turnout and crowds have enjoyed "tremendous" savings while getting a jump-start on their holiday shopping.

• 7 p.m., Dec. 1: El Dorado Christmas Parade. The deadline to enter the parade is 3 p.m. on Nov. 18. Late entries will not be accepted. For more information, call the El Dorado-Union County Chamber of Commerce at 870-863-6113 or visit the GoElDorado website and click the events tab.

• 11 a.m. - 2 p.m., Dec. 10: Santa on the Square. Free train rides will start in front of PJ's Coffee. Santa's friends at Southern Realty Group will hand out cookie kits "for all the good little girls and boys to decorate at home" and Barton Library will host Story Time on the southeast corner of the courthouse. Families will be able to take free photos with Santa using their own cameras.

• MSE gift cards are available for purchase in $25 increments. The cards are good at participating retail stores and restaurants in downtown El Dorado.