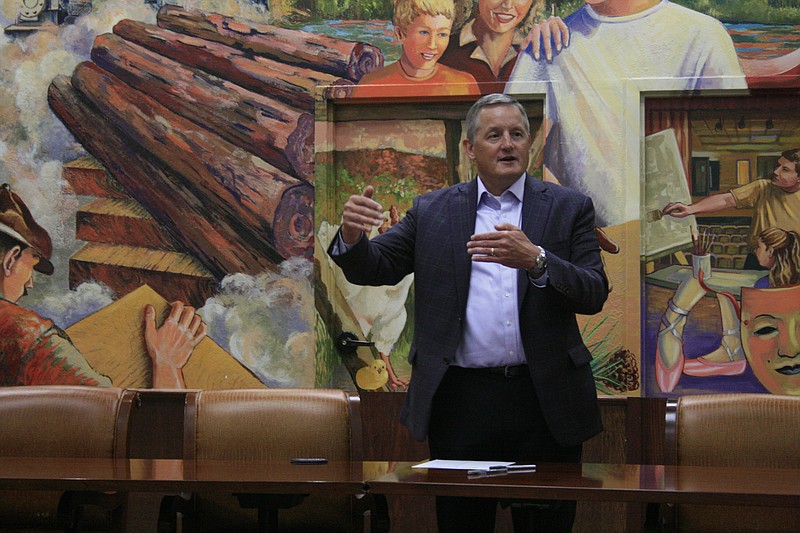 WASHINGTON -- As Republicans prepare for potentially having majority control of the U.S. House of Representatives next year, Arkansas Rep. Bruce Westerman has laid out his vision for the House Natural Resources Committee, which includes efforts on energy production and oversight.

Westerman, R- Hot Springs, is set to become the committee chairman if Republicans win the House. Westerman has represented the 4th Congressional District, which encompasses Union County, since 2015 and currently serves as the ranking Republican under Arizona Democrat Raul Grijalva.

"I want us to be able to responsibly use our resources, to be good stewards, to be conservationists in the truest sense in the idea that we use what we have and leave a place better than we found it for future generations," Westerman told the Arkansas Democrat-Gazette. "That's both environmentally and economically, and there's a model and a way that we can do that."

Westerman studied engineering and forestry at the University of Arkansas and Yale University, respectively. He is the only licensed forester in the current Congress.

"When you start getting into the specifics [of the committee], energy is a huge issue," he said. "It's the high fuel prices that translate into high food prices. It affects low-income and fixed-income people more than anybody else. It was one of the main things we ran on as Republicans. How do we get inflation under control when we know that it starts with energy?"

"We can use our resources in a way that is more responsible and leaves everything cleaner, safer and healthier than anybody else in the world can do it," Westerman said.

Grijalva, as chairman, led Democratic colleagues on a letter in September opposing a proposed deal involving the inclusion of energy permitting changes in a resolution funding the federal government. Sen. Joe Manchin, D-W. Va., reached a deal with Senate Majority Leader Charles Schumer, D-N.Y., about such changes, but Manchin struggled to gain support for related legislative text before Congress adjourned for the midterm elections.

Westerman noted the unlikelihood of Congress passing permitting language before 2023 given Democrats' control of both chambers through December.

"It's a very uphill battle to get anything done in the lame duck [session], but I think it's certainly something we can continue laying the groundwork on and try to take up in the next Congress," he said.

Manchin, a moderate voice who has triggered ire from Republicans and Democrats alike, serves as chairman of the Senate Energy and Natural Resources Committee.

"I think he's someone we can work across the aisle with and make rational changes that will be good for both the economy and the environment, and the American people," Westerman said of the West Virginia senator.

House Minority Leader Kevin McCarthy, R-Calif., and other Republican leaders have promised hearings on the Biden administration's actions if they take control.

Westerman has spent the current Congress raising concerns about federal agencies and their rulemaking abilities; he sent a letter on Monday to Commerce Secretary Gina Raimondo regarding the National Oceanic and Atmospheric Administration and how proposed changes to North Atlantic right whale vessel speed rules could affect boating trips and safety.

"They didn't go through the proper procedure, and they didn't listen to public input," Westerman told the Arkansas Democrat-Gazette.

He added, "This is a prime example of something that we would have an oversight hearing on." Westerman's letter also cites issues about projects affecting endangered species and resource conservation efforts.

A Commerce Department official confirmed to the Arkansas Democrat-Gazette it received Westerman's letter. The NOAA Fisheries division accepted public comments on vessel speed rules through Oct. 31, and officials will review submissions before unveiling a final rule next year.

"We get very little response from the administration," Westerman said.

In the letters, Westerman notes the U.S. Supreme Court's June decision curbing the EPA's ability to regulate air emissions. Justices ruled 6-3 in favor of West Virginia and other Republican-led states in determining the agency does not have broad authority under the Clean Air Act to regulate emissions from fossil fueled-powered facilities.

"That is a goal of Republicans in the House; change the administrative state and not do it so people aren't kept safe or the environment is not protected, but to do it so we can do what is best for people, do what's best for the environment, and get stuff done," the congressman said.

Poll workers across the country are continuing to count ballots from the elections with multiple races still undetermined.