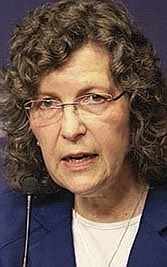 Dr. Jennifer Dillaha, the state Department of Health's chief medical officer, will become the department's director, while Renee Mallory, the department's chief of staff, will be interim health secretary.

Romero, who held both titles, announced last month that he was stepping down this week for a job with the U.S. Centers for Disease Control and Prevention.

His last day on the job at the Health Department is today.

The appointments marked the first time the secretary and director jobs have been assigned to two different people since the secretary position was created as part of a reorganization of state government in 2019.

Health Department spokeswoman Meg Mirivel said in an email Mallory will "oversee policy and operations," while Dillaha "will be in charge of medical, clinical, and epidemiological considerations and report to the Secretary."

"The responsibility of each position matches the technical expertise of each individual," Hutchinson said in a statement to the Arkansas Democrat-Gazette. "With the necessary growth of [the Health Department] and public health I needed someone with a broad background for Interim Secretary of Health.

"Ms. Mallory began working for the Arkansas Department of Health 33 years ago and has been integral as a leader in several programs that have benefited the state. She has invaluable experience serving the state and will be a great fit as interim Secretary of Health."

Dillaha, meanwhile, "has played a significant role in guiding the state through the last two years of the pandemic," Hutchinson said. "She has shown her dedication to Arkansas, and I have full confidence that she will continue to lead the state in improved health outcomes with the same dedication."

The term-limited Republican governor said the interim nature of Mallory's appointment is because he'll be leaving office in January.

"With the limited amount of time remaining in my administration I wanted to leave the responsibility of appointing a Secretary of Health to the next administration," he said.

Hutchinson spokeswoman Shealyn Sowers said avoiding a potential Senate confirmation hearing on a permanent appointment, such as the one held last year on Romero's, "wasn't even a consideration" in not naming a new permanent secretary.

"We're not guaranteed a special session, so the first Senate confirmation hearing wouldn't even be until January [during the regular 2023 Legislative session] anyway," Sowers said.

Under the 2019 reorganization law, the health secretary can employ a Health Department director and "delegate his or her functions, powers, and duties to the director or to other various units or personnel of the Department of Health as he or she shall deem desirable and necessary for the effective and efficient operation of the department."

Dr. Nate Smith, the state's first health secretary, had been department director when the reorganization took effect. He held both titles until he left the department in 2020 for a job with the CDC.

Dillaha said her understanding is that the health secretary appoints the director "in consultation with the governor." She said the Health Department director is over the "public health science part of things," while the secretary is more involved with administration.

"I think it plays to the strengths of both Renee Mallory and myself," Dillaha said.

"Renee is a superb administrator, and my forte is in public health science and addressing the public heath issues of the state."

In a brief "emergency" meeting, held via video conference on Thursday, the state Board of Health, which makes health-related regulations enforced by the Health Department, unanimously nominated Dillaha for the director's job and passed a resolution in support of Mallory's appointment.

Dillaha and Mallory will officially start their new jobs on Sunday, Mirivel said.

Senate President Pro Tempore Jimmy Hickey, R-Texarkana, said he spoke to Hutchinson about the decision to name an interim health secretary and thought it was prudent.

"His term is, of course, on the last leg right here, and with a new administration coming in, I think this was the appropriate move," he said.

Hickey also said he believes the appointment of Dillaha was a good decision.

"She will have the knowledge of what aspects need to be addressed on the health side," he said. "I think that is a good fit."

Rep. Jack Ladyman, R-Jonesboro and chairman of the House Committee on Public Health, Welfare and Labor, said he didn't know Mallory that well, but he believes Dillaha will do a good job.

"She has worked closely with the committee during the pandemic and I look forward to continue working with her in a new role," he said.

He said he looks forward to working with Mallory and maintaining the excellent work the Health Department has done during the pandemic.

In April 2021, complaints from lawmakers unhappy with Romero's handling of the pandemic led to the Senate Rules Committee's first confirmation hearing on a gubernatorial appointment in decades.

The committee voted 7-3 to forward the confirmation to the full Senate, which then approved it in a 25-8 vote.

Sen. Trent Garner, an El Dorado Republican and member of the Rules Committee who voted against the confirmation, said he wasn't familiar with Mallory but was well aware of Dillaha, who he believes was working hand-in-hand with Romero in implementing "draconian" measures during the pandemic.

If he's able to go through the confirmation process, he said he will put a strict microscope on the qualifications of the Health Department's leadership.

"I will ask tough and pointed questions on how she would lead in case of a similar pandemic," said Garner, who is not running for reelection this year. "It's not a bias or anything. I will ask her fair and pointed questions. We can't have a repeat of some of the anti-business COVID policies that were put in place."

Dillaha, 66, a physician with training in internal medicine, infectious diseases and geriatric medicine, has been employed by the Health Department since 2001.

She was named chief medical officer in August 2021, adding to her roles as medical director for immunizations and outbreak response.

Before that, she had been state epidemiologist since March 2020.

Her other department posts have included director of the Center for Health Advancement from August 2005 to June 2010 and the director's special adviser for strategic initiatives from June 2010 to April 2013.

Mallory, a 58-year-old registered nurse, started with the department as a nurse surveyor for Health Facility Services in 1988.

She was deputy director for public health programs from 2018 until she was named chief of staff in June.

She has served as a designee of the health secretary on the Tobacco Settlement Commission and State and Public School Life and Health Insurance Board, which was dissolved under a state law passed last year.

The Health Department, which has local health units around the state, has 2,030 employees in regular positions and an additional 69 "extra help" employees, Mirivel said.

The department's budget for the fiscal year that ends June 30 is $674 million, almost half of which is "time-limited federal funding specifically for COVID-19 related efforts," she said.

The University of Arkansas for Medical Sciences, which employed Romero as an assistant professor of pediatrics, paid the salary and was then reimbursed by other entities, UAMS spokeswoman Leslie Taylor has said.