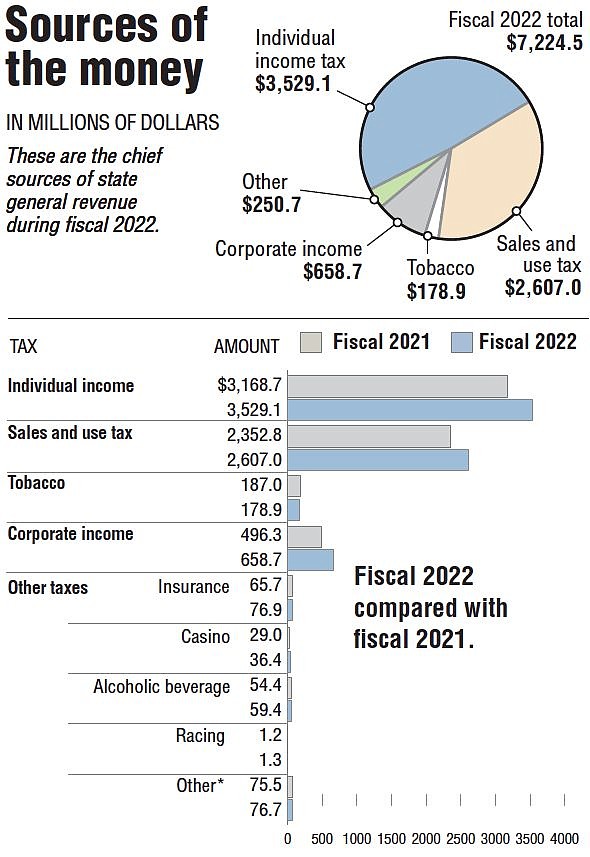 Fueled by larger than expected individual income and corporate income tax collections, Arkansas's general revenue in April surged by $378.7 million, or 40%, over the same month a year ago to $1.3 billion to set a state record for any month.

Last month's tax collections beat the state's forecast by $576 million, or 76.7%, the state Department of Finance and Administration reported Tuesday in its monthly revenue report.

The state's sales and use tax collections in April slipped compared with the collections fueled by federal stimulus in the same month a year ago, but they still exceeded the state's forecast.

The state's previous record for total general revenues for April or any month in the state's history is $958.8 million in April of 2019, said Whitney McLaughlin, a tax analyst for the finance department.

"Overall, we continue to see stronger-than-expected economic growth compared to projections," he said in a written statement.

Gov. Asa Hutchinson said Tuesday the state's economy is booming, and the higher prices of consumer goods have increased the state's revenue more than expected.

"[T]he national economic outlook has significant uncertainty, and there is a need for caution as we look at options for the end of the year surplus," the Republican governor said in a written statement.

In the 2021 regular session, the Republican-dominated General Assembly and Hutchinson enacted a Revenue Stabilization Act to distribute $5.84 billion in general revenue in fiscal 2022 to state-supported programs, such as human services, public schools, colleges and universities and correctional programs.

Tax refunds and some special government expenditures are taken off the top of total general revenue collections, leaving a net amount that state agencies are allowed to spend up to their maximum distribution under the Revenue Stabilization Act.

Shelnutt said he's shocked by the state's general revenue tax collections in April, but the collections have been volatile over the past two years amid the COVID-19 pandemic.

He said he expects other states to begin soon reporting similar increases in their tax collections as well as similar large surpluses.

In Arkansas, this year's income tax filing and payment deadline was April 18 and last year's deadline was May 17, state Department of Finance and Administration spokesman Scott Hardin said.

On April 22, Hutchinson said the options for using part of the state's general revenue surplus include accelerating broadband deployment in the state, providing more money for public school facilities because of the rising cost of construction, and/or providing tax relief to help Arkansans with financial pressures resulting from the increased rate of inflation.

Hutchinson said Tuesday that taxpayers "need and deserve at least a portion of the surplus to be returned to them because the state should not be generating this large of a surplus.

"As to the likelihood of a special session, the revenue report increases the possibility of one, but it is too early to make that decision," he said. "I do not anticipate calling a special session before June 30, 2022."

House Revenue and Taxation Committee Chairman Joe Jett, R-Success, said he's not in favor of holding a special session to consider any tax cuts "until we get a clear-cut plan." He said he is looking at the possibility of changing the state's depreciation schedules to conform with the federal government's depreciation schedules to save many businesses a significant amount money.

"I'm not sure DF&A can implement a full rebate program," Jett said, so he said he's also looking at the possibility of creating an income tax credit on taxpayers' income taxes.

As to whether the Legislature should meet in special session to consider tax cuts and other matters such as increased state funding for expanding broadband access, Sen. Missy Irvin, R-Mountain View, said Tuesday in a text message to the Democrat-Gazette that "I prefer we wait till the regular session because I think we need a full policy discussion on tax policy and we need to continue reducing the income tax." She said she doesn't want to hastily decide tax policy on an economy suffering from high inflation.

She said she believes lawmakers can address the state's broadband rules, office and funding through the Arkansas Legislative Council.

Some of the individual and corporate income tax rates, enacted in the special session, are contingent on the state not tapping the state's $1.2 billion catastrophic reserve fund.