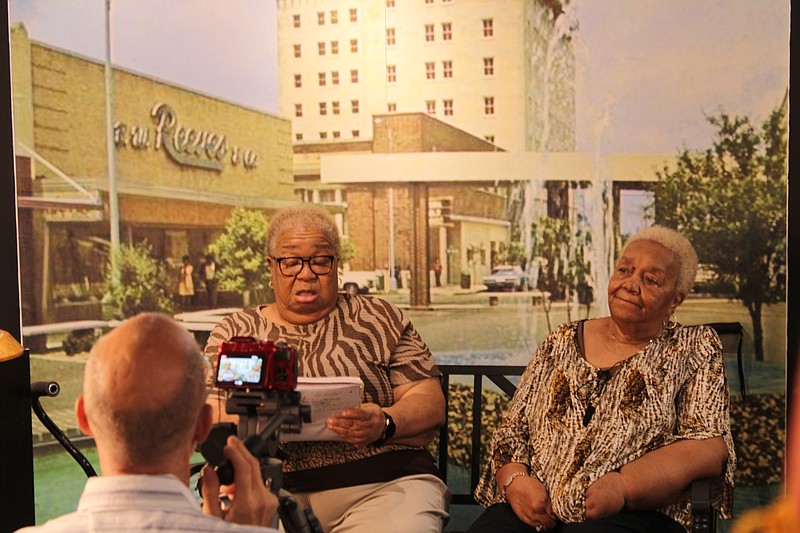 Jean White, left, looks through notes she wrote about growing up near the St. Louis addition in El Dorado as Virginia Charles reminisces. Darrin Riley, facing away, filmed an interview Thursday at the Gallery of History with the women, who were cousins of the late Lonnie Mitchell, as they recalled growing up in El Dorado's Black neighborhoods during segregation and their cousin's impact on the community, as part of the El Dorado Historic District Commission's project to identify an African American context to the city's history. (Caitlan Butler/News-Times)

A family with deep ties to El Dorado gathered Thursday afternoon at the South Arkansas Historical Preservation Society's Gallery of History to share details of late patriarch Lonnie Mitchell's life as part of an ongoing project to identify notable Black people, businesses, churches, landmarks and more from and in the area.

First proposed in 2020 as part of a citywide preservation plan, the El Dorado Historic District Commission is seeking to add an African American context to the city's historic records, and Thursday's interview was one of the first efforts towards that end.

Jean White and Virginia Charles, first cousins of Mitchell, were the focus of Thursday's interview, but they were joined by three of Mitchell's daughters -- Idonia Gardner, Kathy McAlphin and Regatta Mitchell -- and their own daughters, Debra White and Karen Prideaux, respectively.

Charles and Jean White spoke about growing up in neighborhoods near the St. Louis addition, a business district serving El Dorado's Black community when segregation was still in effect. Mitchell, they said, was an entrepreneur who owned multiple businesses -- everything from a laundry and restaurant to a pool hall and movie theater (the Moon Theater).

"In fact, from North West Avenue back to Cordell Street was basically owned by Blacks," said Charles.

The St. Louis addition was home to the schools that served Black residents -- Carver Elementary and Washington High School, which Charles and Jean White said they attended -- as well as myriad Black-owned businesses and churches.

Charles formerly worked for Lonnie Mitchell, she said, taking care of paperwork at his laundry for $10 a week while her uncle Norris Finley cleaned the clothes and her cousin took care of the financial aspects of the business.

"My uncle Norris Finley, he was a tailor -- the first Black tailor that I know of around this area... He tailor-made suits," Charles said.

Mitchell was known for providing employment for Black residents at his many businesses, and his cousins said he was also a provider for his family. He worked closely with his mother Idonia, after whom his youngest daughter is named.

"And that's their Daddy, he checked on me every night," Jean White added. "He was like Robin Hood."

Mitchell was also a World War II veteran, having served as a cook in the Army until he received an honorable discharge.

Preservation Society Executive Director Steve Biernacki explained Thursday that the goal of recording the African American history context for El Dorado is to eventually earn historical area designations for the St. Louis addition and other predominantly Black neighborhoods in the city with hopes to reestablish some of the attributes that helped the areas thrive.

Charles and Jean White said the decline of the St. Louis neighborhood, which is which is roughly bordered by Robinson and Fifth streets and West and College avenues, was gradual, starting sometime after the city integrated. However, the efforts to revitalize the area would be something Mitchell could look back and be proud of, Charles said.

"I think that that's what they were trying to instill in the rest of us -- hard work, dedication, love. This is what you do; this is how you survive," Charles said. 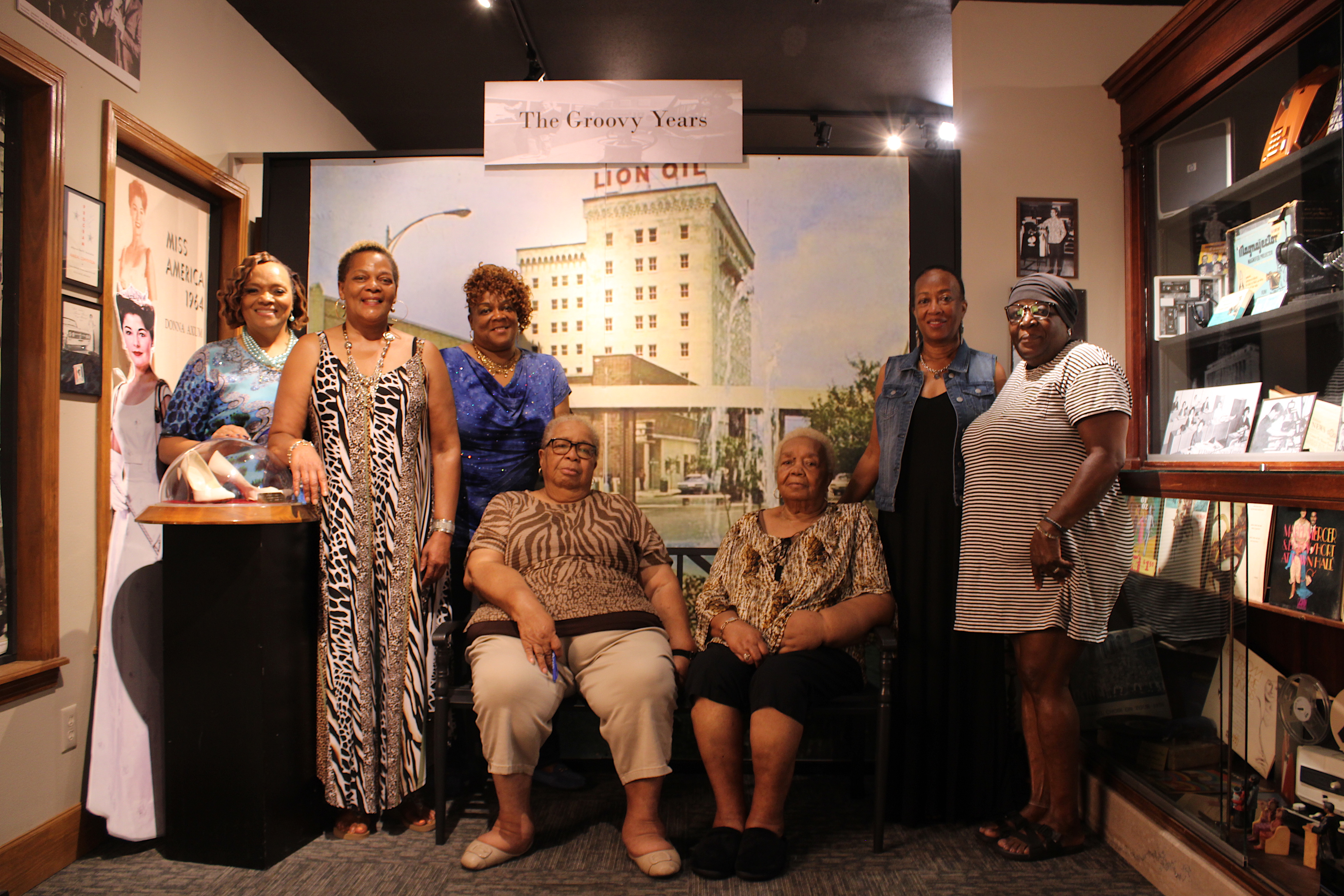 Pictured from left to right are Idonia Gardner, Kathy McAlphin and Regatta Mitchell, daughters of the late Lonnie Mitchell; Jean White and Virginia Charles, cousins of Mitchell's; and Karen Prideaux and Debra White, Charles' and White's daughters, respectively. The women gathered at the Gallery of History on Thursday to talk about their cousin Lonnie Mitchell's impact on the Black community in El Dorado in the early and mid-20th century. (Caitlan Butler/News-Times)