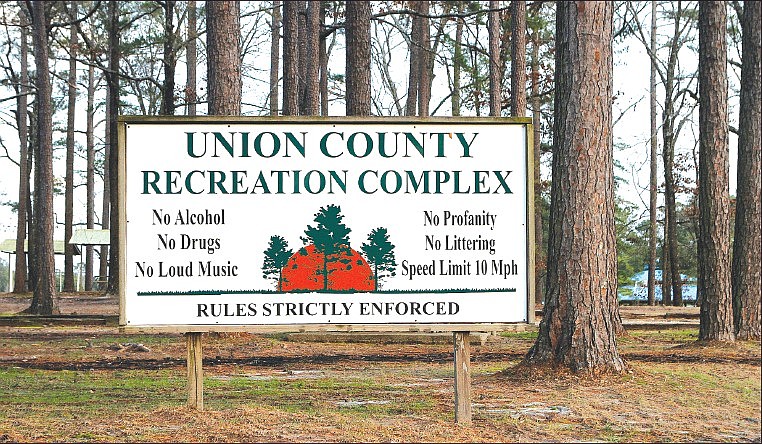 The sign at the entrance to the El Dorado-Union County Recreation Complex is seen in this News-Times file photo.

While the El Dorado-Union County Recreation Complex board of directors is keeping its fingers crossed that two new soccer fields will be ready for play later this fall, the group is consigned to the fact that the fields may not open until spring.

Bermuda grass is growing on the new fields that are southeast of the Dumas Pavilion but due to a delay in the delivery of the plantings and a late start in the growing season, the soccer fields may not see any action this fall.

In the meantime, the El Dorado Advertising and Promotion Commission has redirected existing funds and allotted an additional amount to help complete another project at the complex: the installation of two kiosks that will be used for concession stands and additional restrooms on the south end of the complex.

The soccer fields and kiosks are two components in the first phase of a two-part renovation and expansion plan for the complex.

The project is largely funded by a $2.7 million commitment from the El Dorado Works tax, a one-cent, city sales tax initiative that is geared toward economic development, infrastructure and quality-of-life projects.

Work on phase one got underway in 2019 and in the summer of 2020, A&P commission kicked in an additional $257,000 to help complete the soccer fields after an unanticipated engineering expense created a shortfall in the $2.7 million budget.

The soccer fields and additional restrooms are the remaining components in the first phase one of the master plan for the complex.

The initial conceptual design for phase one included a concessions plaza that would serve the softball, baseball and soccer fields on the south end of the complex.

The concept came with a concession stand and an outdoor dining area; restrooms and water fountains; coaches/umpires' lounge and changing rooms and office space for the complex manager -- the Boys and Girls Club of El Dorado.

But after considerable discussion about logistics, the availability of space for the plaza and the $343,989 price tag, complex board members whittled down the features of the building and eventually scrapped the idea.

Earlier this year, Murphy USA agreed to donate two used kiosks to the complex. MUSA uses kiosks at many of its convenience stores and gas stations across the country.

The city of El Dorado and Union County -- both of whom contribute to the complex's annual operating budget -- are working together to coordinate the delivery and installation of the kiosks.

Complex board members have said the kiosks, which will be delivered from out of state, will come with a total of three restrooms.

The kiosks will be placed on the south end of the complex.

Greg Harrison, chairman of the complex board, has suggested that one of the kiosks be placed near the soccer fields and the other, between fields 5 - 8, four baseball and softball fields on the south end of the complex.

An existing restroom facility with four stalls each for separate men's and women's units sits just south of the Dumas Pavilion.

The complex board is exploring options for even more restrooms, including a possibility of expanding the existing facility near the Dumas Pavilion.

Phase two of the master plan -- which includes a baseball field for older teens and adults, a recreational trail that will encircle the complex and parking lot expansion and improvements -- have been put on hold for a couple of years to gauge the impact of phase one projects on complex operations.

To help install the kiosks, the A&P commission voted Oct. 6 to redirect funds remaining from the $257,000 that had been allocated for the soccer fields and to increase the allotment by $14,800.

Commissioner Paul Choate, who serves as treasurer of the commission, explained that in-house, accounts payable mix-ups resulted in almost $200,000 worth of invoices being charged to the El Dorado Works Board budget, rather than the A&P budget, for work that was done on the soccer fields.

Choate, also a member of the El Dorado City Council, said the errors were discovered during a months-long effort by accounting firm Emrich and Scroggins LLP to clean up the city's financial records in order for the city council to finalize the fiscal year 2020 budget and adopt the 2021 budget, which was approved in August.

Choate then noted MUSA's donation of the kiosks, saying that a work-order change to install the structures came in at $71,891.

Union County is covering the cost to transport the kiosks to El Dorado and working with the city to coordinate the delivery and installation of the kiosks.

City officials and complex board members have said the project will call for the use of a crane and installing the kiosks on the same day they are delivered will cut down the cost of having to rent the crane for more than one day.

Choate said the job will entail laying the concrete foundation and plumbing and electrical hook-ups for the kiosks.

Diversified Construction and Design, LLC, is the contractor for the project.

Choate proposed that the A&P redirect the remaining balance toward the kiosk project and allocate an additional $14,807 that will be needed to fund the $71,891 project.

"We need to complete the placement of the kiosks and at this point in time, I know of no other costs in front of us," Choate said.

"This will get us a long way down the road as to where we want to be at the complex," Choate said, adding that he will work with the city's accounts payable and receivable clerks to straighten out the matter.

"And I know Diversified has been waiting to be given the approval to go ahead and start this," added A&P Commissioner and city Council Member Dianne Hammond.

Commissioner Alan Meadows inquired about a timeline for when the soccer fields would be ready and Harrison said the fields may not be ready until the spring.

Nationwide bottlenecks in the supply chain for building materials and other goods and services caused a delay in the delivery and planting of most of the Bermuda grass for the soccer fields.

The majority of the plantings were expected in mid-June but did not come until late July, Harrison said.

"In the world of COVID and with the weather, we're behind where need to be in planting," said Choate.

A&P chairman Barbie Luther, who is a Union County Master Gardener, also said that cooler temperatures will slow the growth process of the Bermuda grass.

Harrison said there is about two weeks left in the prime growing season.

During a complex board meeting Friday, David Lee, executive director of the BGCE, said the club will use its own fields and the El Dorado School District soccer fields behind the Union County Fairgrounds for its soccer leagues until the fields are ready at the complex.

Approximately 550 children have signed up for the soccer leagues this year, Lee said.

Phillip Lansdell, ESD athletic director and ex-officio member of the complex board, said that with the two fields at the complex, the district will be eligible to bid for high school soccer tournaments in the spring.

He said that if the ESD wins the bid, the boys' 5-A tournament could bring up to 32 teams to town in May.