Futbol or football, he can kick it 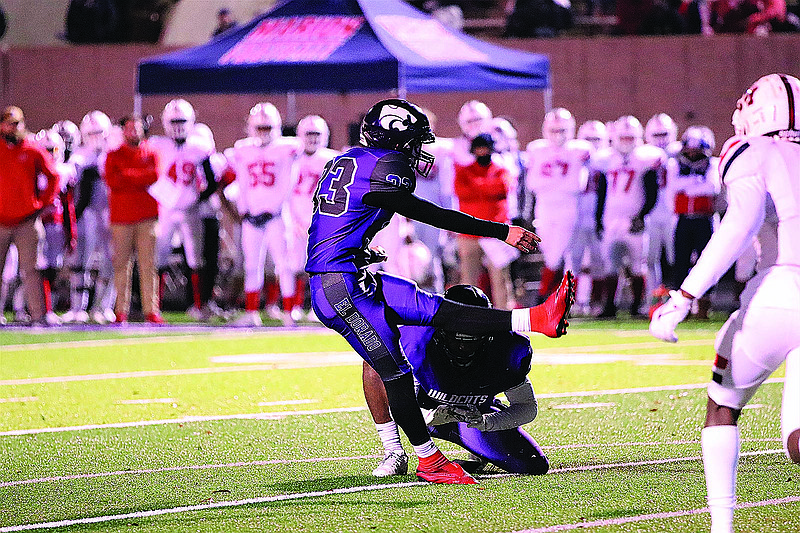 El Dorado kicker Rojemi Aydogdu follows through on a field goal against Marion on Friday. The senior foreign exchange student from Germany has played a major role in the Wildcats' season. El Dorado will face Greenwood on Saturday in the 6A state championship game, beginning at noon in War Memorial Stadium.

At the end of the summer, El Dorado appeared to have all boxes checked en route to a successful football season. All boxes … but one.

At the bottom of the Wildcats’ checklist, one box was unmarked - kicker.

“Dave Carruth graduated and the only other kicker on our roster left over the summer,” said Justin Geurin, the Wildcats’ kicking coach. “So, we’re sitting there at the end of July and we don’t have a single kicker on the roster.

“We had a situation. I was trying to talk to the soccer coaches to see if they had anybody. Next thing I know, (head coach) Steven Jones is texting me and saying we’ve got an exchange student from Germany who’s going to be living with RJ Thomas. We’ll see what happens when he gets here.”

Rojemi Aydogdu, a senior from Germany, has successfully kicked 65-of-68 extra points and 3-of-5 field goals for the Wildcats, who will play Greenwood for a 6A state championship on Saturday.

“I love it,” said Aydogdu. “I think it’s super cool for me that my first football season ever and we made it so far. It’s very cool. I like the experience a lot.”

The foreign exchange student had never played football in his life but was a midfielder on his club soccer team in Frankfurt. In El Dorado, he’s staying with the family of senior receiver RJ Thomas.

“When we started it, we were just saying we need a kicker. I didn’t realize how big his role was at the time,” said Thomas, Aydogdu’s best friend on the team. “But going through the season, we’re starting to realize he has one of the biggest jobs on the team. And, he’s really fulfilling it, too.”

“He has improved drastically since August,” said Jones. “He has become very accurate and reliable. And, he is a great kid.”

And, a quick study.

Aydogdu arrived in El Dorado and never had an opportunity to get homesick. The Wildcats got him on the football field almost immediately.

“They didn’t have to talk me into it,” he said. “I came to practice like one time. They were like, ‘Do you want to kick a football?’ I was like, ‘yeah, for sure.’ I kicked it and, I don’t know, I liked it. Playing football and being apart of a team helped me a lot to be part of the school and community.”

Geurin, a former standout kicker for the Wildcats, said he had to change some of the soccer habits and adjust them to the football.

“He had experience kicking a ball but it was not an American football,” said Geurin. “My immediate response was, ‘OK. I can work with a soccer player.’ I was a football kicker and a soccer player myself. Someone who has experience striking a ball is obviously a benefit as opposed to someone who’s never kicked a ball before in their life. But there are some adjustments. With soccer, you’re trying to keep everything down. Keep everything low. If it gets up too high, it’s over the goal. Whereas in football, it’s almost the opposite. We want to get it up quick and drive through it. It’s some small adjustments. Early on, I used soccer terminology with him to try to explain what we wanted in different situations.”

It wasn’t an immediate transformation for Aydogdu, who had to put in extra work. His toughest adjustment?

“I think it’s to drive through the ball,” he answered. “Sometimes I kick it like a soccer ball and that’s not how you do it because you have to really drive through it. My coach helped me a lot to be better at that.

“I would say after the first three two or three games, I kind of got confident with the PATs. On the field goals, it just depends on how far it is.”

Aydogdu’s longest field goal this season has been 37 yards.

“I was actually looking back at some video clips from August when he first got here when he was really struggling just to hit extra points consistently. Now, if it’s a 40-yard field goal or inside that, I feel confident telling Coach Jones to send him out there to put three points on the board,” said Geurin. “He’s become automatic on extra points. He does all the things we ask him to do on kickoffs. He’s legitimately a reliable weapon. I worked for a long time to be a consistent reliable kicker for the varsity football team. From the time I was in the seventh grade when I first started kicking. This guy, literally, has learned a new sport since August. It’s a testament to who he is as a young man and how much work he’s put in and how much his teammates have supported him. It’s really been fun to watch.”

Since the first three games, Aydogdu has been perfect on extra points when the snap and hold have been good. He’s also shown a knack on onside kicks and sky kicks on kickoffs.

“The kid got off a plane from Germany and, two days later, he was a football player,” Geurin marveled. “The biggest thing I have to say about Rojemi - this guy got off a plane in a foreign country and started playing a sport he’s never played before. He’s now sitting here, a varsity starter on a team about to play for a state championship.”

Exactly how much does Aydogdu actually know about the ins and outs of American football? At this point, does it matter?

When it comes to the state championship game, he’s on the same page as all of his El Dorado teammates.

“I want to take a ring back to Germany,” he said.