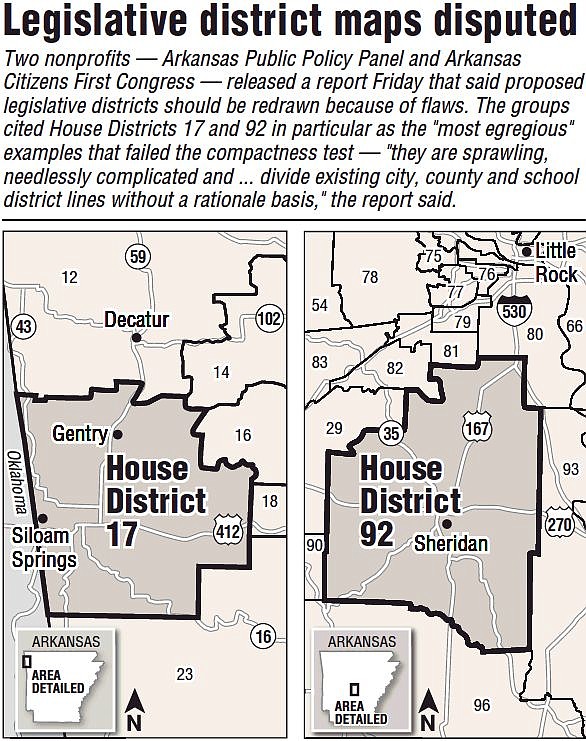 Arkansas Democrat-Gazette/SOURCE: Arkansas Board of Apportionment

Two nonprofit community-based justice organizations announced Friday they have asked the Arkansas Board of Apportionment to completely redraw the proposed legislative maps due to claims of gerrymandering.

The Arkansas Public Policy Panel and Arkansas Citizens First Congress released a report Friday stating they found serious deficiencies with the Board of Apportionment's legislative redistricting proposal, which is to be voted on Monday.

"They divide communities unnecessarily to serve political ends and marginalize the ability of racial and ethnic groups to influence the outcome of elections," the report states.

Bill Kopsky, executive director for the Arkansas Public Policy Panel, told the Arkansas Democrat-Gazette the proposed maps violate the criteria they told the public they were meant to follow.

"The only guideline it didn't seemingly completely violate was protecting the incumbent and even there they were picking and choosing which incumbents to protect," he said. "The maps are so flawed they need to be thrown out and started again." Kopsky said the most disturbing part was the Board of Apportionment's promise to the state, made when gathering public input, that the maps weren't going to harm minority communities.

"Time and time again, they have sliced up these communities," he said. "Arkansas has a lot of racial justice concerns already and these maps are going to lead to our politics being more divisive and with minority communities not being able to respond." The board consists of the governor, attorney general and secretary of state, all Republicans.

Gov. Asa Hutchinson said in response to these allegations that the redistricting maps are not final at this time.

"[S]taff will continue to review public comments until final maps are adopted on Monday," he said. "We are happy to answer all questions regarding redistricting on Monday following the Board of Apportionment's adoption of the maps." The report done by the two groups states the proposed districts split existing political boundaries where they should be left whole. It states the Senate map had 33 counties split 72 times and the House map had 53 counties split 135 times.

"We have talked at length about the splitting of places like Little Rock, but there numerous instances of small communities being broken up for seemingly no reason," Kopsky said. "These include cities like Mountain Home, Hoxie and Magnolia."

Kopsky said this type of splitting is known as cracking.

"Cracking is where you take a population and split it into little pieces," he said. "It appears these maps are cracking minority districts and marginalizing Black and Latino voters. The board cracked Democratic precincts on racial and ethnic grounds."

The report states many of the proposed districts divide communities of interest by putting urban precincts together with rural ones and minority precincts with largely white precincts. It also states that the maps appear to have been drawn to arrive at specific political outcomes that heavily favor Republicans.

Kopsky said their analysis shows that Democratic voters make up 35% of the state's electorate, meaning there should be close to the same amount of representation in the political seats, but current numbers are close to 18% representation.

"This is because they have cracked and divided communities over time," he said.

Kopsky said many of the proposed districts also fail the compactness test, with House Districts 17 and 92 being the most egregious examples.

Kopsky said the proposed maps are reason enough for the state to take a hard look at redistricting reform.

"It's clear we need an independent commission," he said. "Having this in the hands of three elected officials is a problem." Kopsky said the ability for the Board of Apportionment members to make these decisions and not have to explain their reasoning to the public is also a problem.

"Let's say you are the mayor of Hoxie and you want to know why your city was split, they don't have to respond or justify their decision," he said. "The current system creates the room to allow these political figures to pretty much create the maps." Kopsky said he believes the proposed maps are so egregious that it opens up the state to legal challenges.

"The problem is legal challenges cost a lot of money and confuse voters," he said. "It has a lot of negative consequences attached to it. It would be better if the board was transparent but that is not what we have." The Arkansas Public Policy Panel is looking at all options when it comes to the proposed maps and isn't ruling out a potential lawsuit.

"We have our lawyers reviewing it," he said.