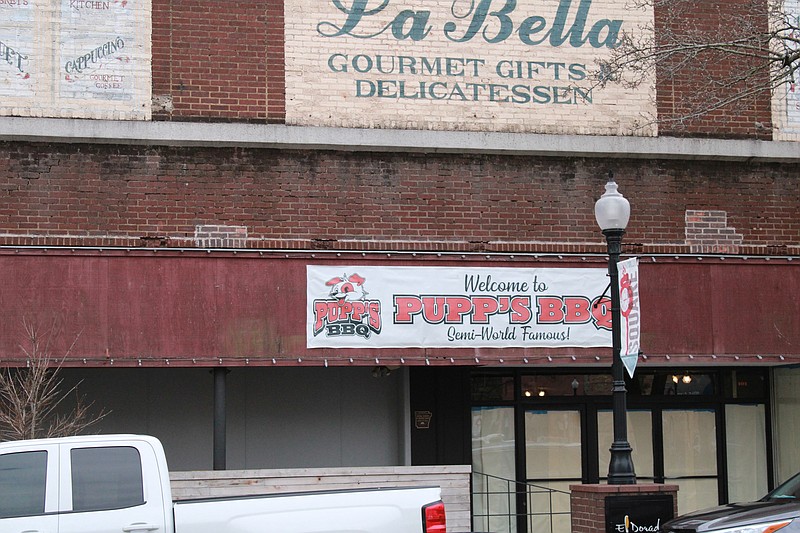 Several new businesses have opened and are opening in downtown El Dorado and discussions about the openings were cross-referenced during Main Street El Dorado and El Dorado Historic District Commission meetings last week.

Elizabeth Eggleston, executive director of the EHDC, told commissioners May 13 that three new downtown businesses have reached out with inquiries about potential Certificate of Appropriateness requests.

COAs are required for most projects within the city’s commercial historic district, which encompasses most of downtown El Dorado, particularly if the work will affect the historical or architectural character and integrity of the district.

During a regular Main Street El Dorado board meeting May 11, MSE executive director Beth Brumley said new businesses have opened in a couple of spaces that shuttered operations or relocated last year because of the coronavirus (COVID-19) pandemic.

One of them, Pupp’s BBQ, launched its soft opening last month at 101 E. Main, the former location of LaBella Gourmet Gifts and Delicatessen, which closed last summer when business took a hit because of COVID-19.

The Smackover-based business has expanded its reach into El Dorado with the new storefront operation and its food truck, which has popped up at various locations and events around town within the past few years.

The truck served food during recent downtown events, including Shamrockin’ on the Square, which was presented by Main Street El Dorado in March, and Murphy Arts District shows that featured Steven Curtis Chapman and Big Daddy Weave.

Brumley noted that Pupp’s reportedly went through nearly 1,000 pounds of brisket alone within four days of the soft opening of its storefront in mid-April.

“They had a great response and had to work through a distributor to get enough meat to keep up with demand,” Brumley said.

She said Pupp’s and the MSE office has received numerous inquiries about call-in and take-out orders, explaining that the restaurant is not taking call-in orders right now and is focusing instead on in-person customers, who have formed long lines since the store opened.

Eggleston previously said Pupp’s is expected to submit a COA for signage in the near future and that she would initiate a request for services from Main Street Arkansas to assist with the COA application for an awning on the South Washington Avenue side of the business.

On May 13, Eggleston said MSA had submitted drawings for proposed signage, work on the deck and the awning, which would denote the area for take-outs and deliveries on South Washington Avenue.

The space formerly housed Mr. Tuxedo, which shuttered its storefront operation and relocated out of the downtown square last year due to a severe drop-off in business caused by the coronavirus (COVID-19) pandemic.

The space had been undergoing renovations in an effort to find a tenant by the property owners.

Ken Bridges, chairman of the historic district commission, noted that the Shelter Insurance agency will relocate from its 501 N. College location.

Eggleston said the historic name of the building is the Duggar Shoe Store and Main Street Arkansas has submitted drawings for a sign that would bear the Shelter Insurance logo.

Eggleston expressed concern that the proposal calls for a backlit sign, adding that the sign also has to follow guidelines that are set by Shelter corporate headquarters.

“We don’t have any backlit signs downtown. The sign that’s above Laredo Grill, the Pegasus, was done prior to us having a historic district,” Eggleston said. “It’s a neon sign, not backlit.”

Added Commissioner Sara Coffman, “In my opinion, that’s sort of what a backlit would look like.”

Commissioner Beth Callaway asked if the sign above the entrance of Fayrays restaurant on Elm Street is a backlit sign.

Eggleston noted there is lettering on the awning at Fayrays and said Shelter Insurance may present a COA request in June, adding that commissioners can discuss the matter further then.

Brumley announced that Too Spoiled Rotten, a baby and children’s clothing boutique, opened May 1 at 207 E. Main.

Eggleston said business owner Hadley McDaniel has already inquired about painting the exterior of the store.

Eggleston said the existing outside colors are burnt orange, yellow and teal and Hadley has said she would like to paint the exterior black and white to match surrounding businesses.

Downtown merchants and MSE worked together to keep business afloat during the COVID-19 pandemic by coming up with promotions, adding or expanding curbside and delivery services and staying abreast of financial assistance that was offered by state and local governments and private businesses in the form or loans and grants, Brumley said.

“The (businesses) that are opening outweigh the ones that closed or relocated out of the district,” she said.