Fundraiser for The CALL set for Saturday 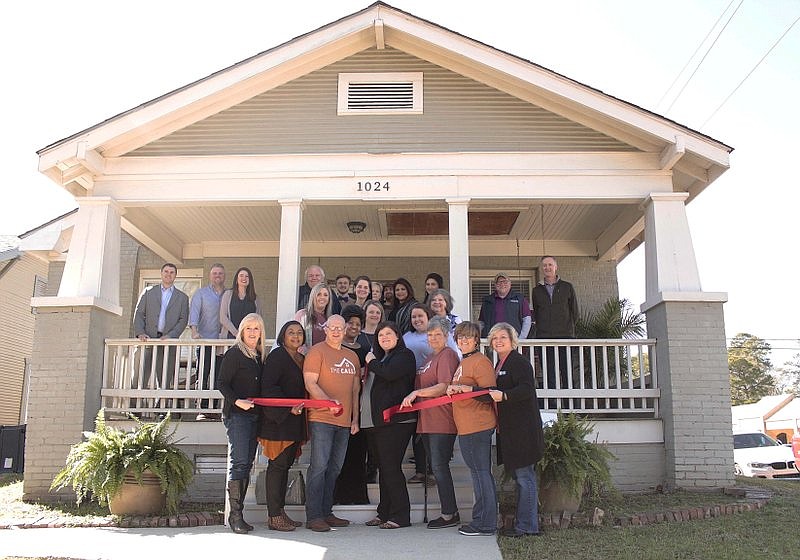 In this 2020 file photo, Karen Hicks, center at the front, cuts the ribbon at the grand opening of the CALL Support Center at Euclid and Fifth Streets in El Dorado. On Saturday, April 8, The CALL is teaming with Steadfast Supply and Company and several other local businesses to hold a fundraiser at this location. (File Photo)

In January, El Dorado residents Kaila and Joshua Emery announced that their new online boutique, Steadfast Supply and Company, would be donating 20% of its monthly profits to a local nonprofit. They selected The CALL of Union County, a nonprofit that focuses on recruiting, training and supporting foster families, as their first partner.

Kaila Emery said in January that The CALL would remain the business’s beneficiary for six months.

On Saturday, Steadfast Supply is partnering with The CALL and several other local businesses to host a “house party” fundraiser at the nonprofit’s central location, 1024 N. Euclid in El Dorado.

Karen Hicks, The CALL’s Union County coordinator, said the relationship between the nonprofit and Steadfast Supply has been a beneficial one so far.

As explained by Kaila Emery in January, the motivation to choose The CALL as Steadfast Supply’s first nonprofit partner was borne from the Emery’s own experiences as foster parents. This experience, Hicks said, has led to benefits for The CALL beyond the obvious financial ones.

“Besides the money-raising aspect, which you can’t ignore, Kaila and I have great working relationship. One of things I love about it is, she has the education element [on the] website, showing our videos, talking about The CALL and spreading information about us,” Hicks said.

The house party on Saturday will be held on-site at The CALL’s Union County headquarters.

Several other local businesses will also be in attendance, including Tiffany’s Food Truck from Camden, All About Flowers, Pure Bliss Salon and Oh How Sweet Cotton Candy.

Pure Bliss, Hicks said, will be selling tickets for a chance to win a gift basket and also plan to supply two bounce houses for the gathering.

Additionally, there will be face painting for donations, music and other activities for kids.

According to the event’s Facebook post, All About Flowers will be giving 100% of profits during the event to The CALL and Oh How Sweet will donate 20%.

The Emery’s have in recent months held several pop-up shops for Steadfast Supply, and the fundraiser is an extension of this idea.

“[Emery] approached me with the idea two months ago of a pop-up shop. They did two or three, which went well, and wanted to do something at The CALL’s location so people could walk inside our office and see what we actually do,” Hicks said.

This approach, Hicks said, will give attendees the chance to learn in detail and first-hand what The CALL does.