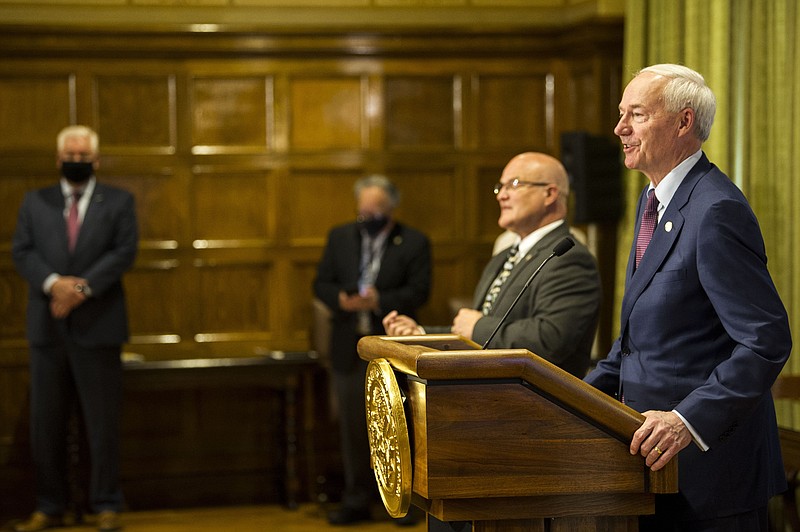 Governor Asa Hutchinson addresses the media during his weekly address on Arkansas' response to COVID-19 on Tuesday, May 4, 2021. The governor announced that this would be the last of his weekly addresses, though he said he would still be updating the media on other matters. (Arkansas Democrat-Gazette/Stephen Swofford)

Gov. Asa Hutchinson said Tuesday during his weekly COVID-19 update that it would be the last, though he said he plans to continue holding news conferences each week to provide updates on other Arkansas matters.

He also issued well wishes to citizens of India, where a massive COVID-19 outbreak is currently ongoing. He asked that any Arkansan who travels to India quarantine themselves for 14 days upon their return.

“I’m grateful that this administration is providing relief to them, but clearly they have been challenged, and nationally, they have limited the international travel to and from India and restricted it for non-citizens,” he said. “It’s important here in Arkansas, we have a good — great — Indian population here, and we value them tremendously.”

Hutchinson also announced a new vaccination goal for the state: for 50% of the Arkansas population to have received at least one shot in the next 90 days.

A map showing the amount of vaccine doses that need to be administered in each county for it to reach 50% of residents at least partially immunized shows that 29.8% of Union County residents, or 9,182 people, will need to get at least one dose in the next 90 days to meet the governor’s goal.

“This is a big challenge for us,” Hutchinson said. “Obviously, we want to get it higher than (50%), and if you look at (only) the adult population it will be, and we want to get them fully vaccinated; but it starts with this simple, foundational goal, and it’s going to take a lot of work from all Arkansans in the communities.”

He noted that typically, only 40% to 50% of Arkansans take the flu vaccine each year; last year, he said, saw a particularly high number of Arkansans being vaccinated against the flu, and the rate of vaccination was 54.9%.

“So we’re setting the goal for COVID vaccinations even higher than we usually do for the flu,” he said. “It’s a challenge for us. It’s a far reaching goal, but a very critical goal that helps us really pinpoint what we need to do over the next 90 days.”

A vaccine clinic is currently ongoing at the Union County Local Health Unit at 301 American Rd. From 8 a.m. to 4:30 p.m. each day through the rest of the week, clinics utilizing the Johnson & Johnson vaccine, which has been approved for all adults 18 and older, will be held there.

There is no out-of-pocket cost to receive a COVID-19 vaccine; those with insurance may be asked to show their cards, but won’t necessarily be asked to. To set an appointment at the LHU clinic, call 1-800-985-6030.

According to a vaccination report produced by the ADH on Tuesday, 2,265 Union County residents were partially immunized and 6,310 were fully immunized against the virus, about 7% and 20% of the population, respectively.

Renee Mallory, the ADH’s deputy director of public health programs, said Tuesday that the department is working to organize pop-up vaccine clinics at large events in counties throughout Arkansas. For example, one such clinic was to be held at an Arkansas Travelers baseball game this week. Other pop-up clinics will be held at high school graduations, local festivals, livestock shows and other such events, she said.

“What that means is they will have vaccine out there for anybody that wants to sit down and get a shot. No appointment, no anything,” Mallory said. “Even if people don’t want a shot but they have questions, someone will be there to answer those questions … Ask the questions and then show up somewhere next week for a shot.”

“Our goal is to get as many shots in arms as we possibly can so we can get our numbers trending down again so we can hopefully resume as normal of a life as we had in March of last year,” she added.

Hutchinson also highlighted legislation that will take effect soon regarding COVID-19 regulations in municipalities. He said Act 1030 will prevent state and local governments from instituting “vaccine passports” or mandating that anyone be vaccinated against the virus, and Act 1002 will disallow municipalities from instituting local mask mandates.

Dr. Jose Romero, ADH secretary, also called attention to variants of the COVID-19 virus that have been identified in the state. He said nearly 75% of the cases of variant virus that have been detected in Arkansas are the UK variant — B.1.1.7 — which he said has shown to be more transmissible and more deadly than the original COVID-19 strain.

He said the UK variant also causes more serious disease in children, and the state has seen an increase in the number of children infected with the virus.

“I want to stress the importance of getting your vaccine. We are seeing an increase in the number of hospitalizations, … in the number of active cases, as well as a slight increase in the overall rolling average in antigen positivity and PCR positivity in the state, (which) is worrisome to us as epidemiologists and public health people,” he said. “We want to make sure that this does not continue because it would indicate that we have spread of significant amounts of virus in the state.”

Between one and four variant cases had been detected in Union County as of May 3, according to information provided by the ADH.

Hutchinson noted that the number of Arkansans hospitalized due to the virus jumped by 20 on Tuesday, which he said is concerning.

“We watch that,” he said. “That’s not unusual for hospitalizations to go up on Monday, but that is a higher jump than what we wished it to be.”