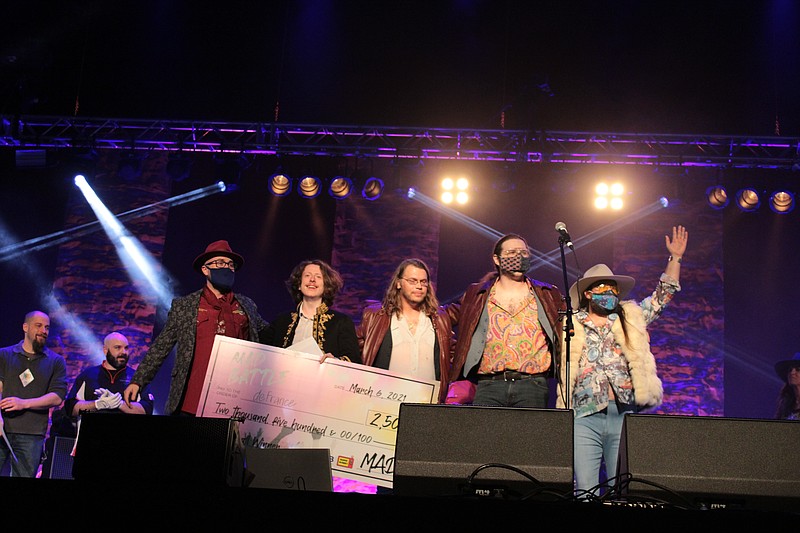 deFrance accepts the MAD Battle grand prize of $2,500 from Murphy Arts District Marketing Coordinator Joanna Benson. The MAD Battle, held Saturday night at the First Financial Music Hall, was the first live, indoors concert to be held at the venue in over a year. (Caitlan Butler/News-Times)

The Little Rock-based band deFrance took home the top prize at the second annual MAD Battle Saturday evening, hosted at the Murphy Arts District’s First Financial Music Hall as the first such event to be held at the venue since the COVID-19 pandemic hit Arkansas about a year ago.

The second iteration of the MAD Battle, a battle of the bands competition for local and regional artists, was originally scheduled for July 2020; however, due to the pandemic, it was rescheduled, first for February 19 and 20, 2021, then until this past weekend due to winter storms that hit the area in mid-February.

“This is a historic night,” host Carter “The Power” Bryant said, referring to it being the first night of live music indoors in over a year at MAD.

In addition to their overall win, deFrance was recognized with the best showmanship award, and the band’s new singer, Charlie Askew, who fans might recognize from “American Idol” season 12, won best vocals.

“We had a ball last night! Thank you to all of our fans, family and friends for showing up last night and showing out,” the band’s post read.

“I thoroughly enjoyed myself here,” Bijoux said before the winners of the competition were announced. “I absolutely love this event … for the opportunity it gives to expose these absolutely talented bands.”

Russell encouraged members of the competing bands to get to know one another, as well as the MAD staff producing the concert, saying those relationships are one of the best ways for artists to build their careers.

“This is a great opportunity to showcase your talent,” he said.

Burger said he was impressed by all the bands that were featured in Saturday night’s show, making it difficult to pick winners.

“They picked some phenomenal bands,” Burger said. “All these bands have their ‘it’ factor. I am a fan of what y’all do. Sitting up here being a judge has been a great honor.”

After winners were announced, participating bands met with fans and sold merchandise at the front of the Music Hall.

The venue, while not totally packed, did have a good number of attendees inside, sitting in socially distanced “pods.” Other COVID-related changes in operations, like the requirement for patrons to mask up when moving about and the placement of sanitizing stations throughout the venue, were also in effect.

“It was great to be back doing what we love to do! With the small team that we have, I’d say we pulled off a nearly perfect show,” Joanna Benson, marketing coordinator for MAD, said Sunday. “Several of the bands hadn’t performed in nearly a year and the majority of the audience members haven’t been to a larger-scaled concert in over a year as well, so for our first live, in-person event of 2021 to be a battle of the bands competition was a win-win for everyone.”