Over $7K raised from voluntary tax 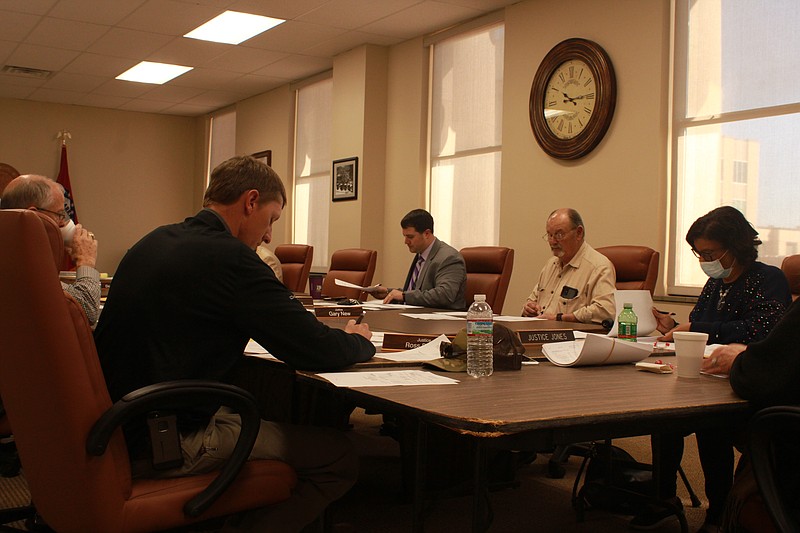 The Union County Quorum Court met on Feb. 23, when present members unanimously decided to create a new fund in the county’s budget for funds raised from a voluntary tax for animal control that was first instituted last year. (Caitlan Butler/News-Times)

The Union County Quorum Court met last Tuesday, Feb. 23, several days after the meeting was originally scheduled due to the winter weather that hit the area in mid-February.

At 10 a.m., when the meeting was scheduled to begin, the body had not yet gathered a quorum, the minimum number of members needed to hold a meeting; however, District 3 Justice of the Peace Greg Harrison and District 4 JP Gary New both arrived shortly afterward and the meeting proceeded.

One action taken during the meeting was the unanimous decision of all present JPs to create a new fund in the county’s budget for money raised from the voluntary tax passed in 2019 for animal control.

“It’s voluntary, so it’s actually not even a tax. It helps the taxpayers because it helps to control the overpopulation of unwanted animals, and every step that we can take to control that is just a positive for us as a community,” Phena Loftin, who championed the measure, said.

On last year’s tax bills, Union County residents likely noticed the option to pay an additional $10 toward the county coffers. It wasn’t mandatory, but, in its first year, enough local residents opted in that $7,395.78 was raised.

“I’m just so pleased that we were able to do it, and I hope to see a lot of positives come out of it for this community and for the animals,” Phena Loftin, who is Union County Judge Mike Loftin’s wife, said. “I’m very pleased and excited with the amount of participation we had from the community and their contributions.”

Mike Loftin explained Tuesday that he had already had 80 spay/neuter vouchers for $75, about half the cost of the procedure, printed. Those will be given to the Union County Animal Protection Society, he said, which will distribute them to those who need them.

Those who receive a voucher will be able to take it to the veterinarian with their pet, pay their half of the bill up front and turn in their voucher, which the vet will send to the Courthouse for payment of the second half.

The vouchers must be used within 120 days, administrative assistant Jody Cunningham said. The deadline was originally 90 days, she said, but was extended because local vets reported being backed up with appointments.