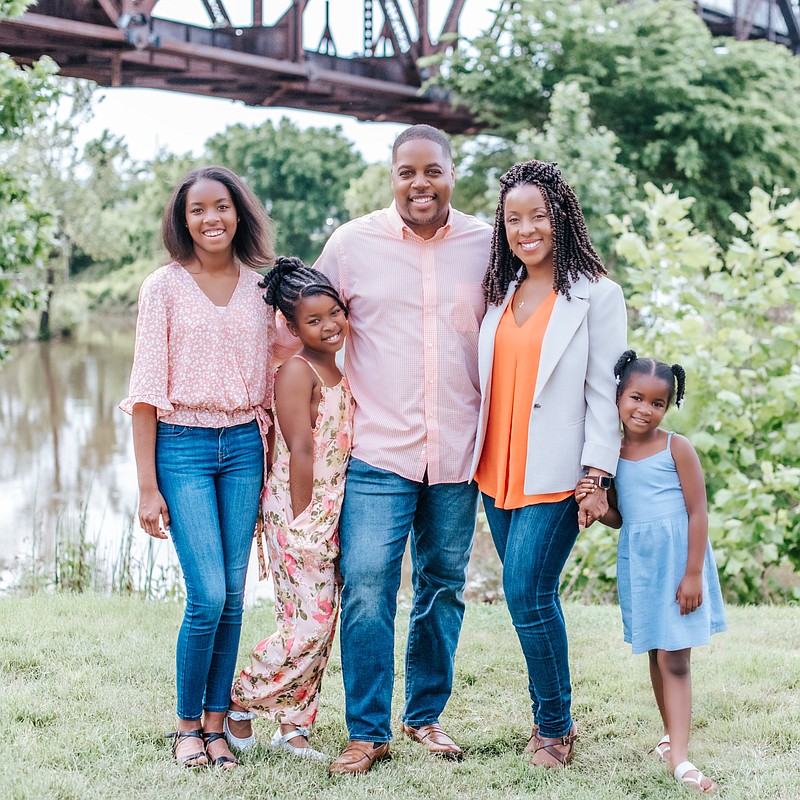 The Pine Bluff native said his roots and family connections within the state are, in part, what inspired him to run for governor. He also shared a childhood story about the passion for exploration he shared with his father that instilled the importance of service early on.

“I remembered I asked my father one day, ‘what is this thing called a governor?’” Jones said. “He told me about it and we looked it up in the Britannica Encyclopedia and the thing that struck me, even then, was being governor is a great way to serve Arkansans and I love Arkansas. So the spark actually happened when I was 8-years-old and the fire never went out, it actually grew. So I came back home a few years ago and decided the best way to serve my state is to run for governor.”

Jones has a background in science, as he holds graduate degrees in nuclear engineering and urban planning. He also used to be an assistant dean for graduate education at the Massachusetts Institute of Technology (MIT).

Jones is also a faith leader and became an ordained minister in 2017. Science and faith sometimes are seen to be at odds around some political topics that Jones would be faced with as governor. But Jones said in his mind, he doesn’t view the two as clashing.

“For me there isn’t a conflict,” Jones said. “When you think about climate change, the Word says that we should be good stewards over the land that God gave us. And from a scientific standpoint, science says we need to reuse as much as possible, be efficient and find new methods that are cleaner; those are exactly the same thing, whether I call it being a good steward or whether I call it using renewable generation.”

Jones, being the former executive director of the Innovation Hub and seeing obstacles Arkansans face firsthand, said those experiences will help him as governor.

“While in that position I visited different communities across the state and in those interactions, we’re able to see people’s passion for something different,” Jones said.

“That’s what stuck with me; we would show them something like a 3D printer, something they’ve never used before and the lightbulb would go off for them. I think the same can be done with the governor’s seat. The ability to look at systems and make changes to systems that impact people directly is the juxtaposition of the coming together of all my backgrounds and being to focus it on the needs of Arkansans,” he added.

Winrock International’s Arkansas Regional Innovation Hub is a nonprofit organization dedicated to inspiring entrepreneurs, creatives and makers and advancing the infrastructure for entrepreneurs in Arkansas and the entire region, according to its website.

Just like the Innovation Hub, infrastructure will be a pillar of Jones’ campaign as something he wants to improve for Arkansas, he said. His emphasis on infrastructure comes in the midst of the closure of Interstate 40 that connects Tennessee and Arkansas after a crack was found on the Hernando De Soto bridge, which has impacted the movement of products and materials in the state and region.

“As an engineer, what we saw on that bridge is an enormous fracture,” Jones said. “It is leading to an economic loss for our state each and every day, and massive inconvenience. There are systems, highways, bridges, roads and rural broadband that if were in place and functioning, would open up the world to Arkansas and Arkansas to the world.”

Jones said he and his team are still working on the specific details of his infrastructure plan, but he said he will seek the thoughts of Arkansans on what to invest in.

Another pillar of Jones’ campaign is improving education in the state.

“Far too often in education for Arkansans, we’re not positioning our youth to come out strong,” Jones said. “As a former educator, we need to have a tough conversation on how to fix our education system. Universal Pre-K, being able to read on level by third grade, we know help determine how a child will do in the future and if they will have the same opportunities as others.”

Arkansas ranks 41st out of the states in quality of higher education and 38th in Pre-K through 12 education, according to the U.S. News & World Report.

Jones also has a brother that is entering into the political fray but on the opposite side of the political aisle. Leon Jones announced earlier this year that he would pursue the Republican nomination for Arkansas Attorney General. Even though the brothers differ politically, Jones said there is peace at home.

“I love my brother, he deeply loves me and we respect each other,” Jones said. “We certainly come together around our mother’s caramel cake and her good cooking. We disagree on some things but at the end of the day, we truly love each other.”

Favorably to Leon Jones, Arkansas has a history of voting red and electing Republican legislators. Chris Jones said he hopes he can connect with people that may differ with him politically.

“What I have learned by growing up in Arkansas and through my faith is that we are at our strongest when we are together,” he said. “I believe as I go out and begin to have conversations around togetherness, I believe people will be able to look beyond the political affiliations by someone’s name. If you lead with respect and engage with Arkansans on what matters to them, what rises to the top are our commonalities.”

Over the next few weeks, Jones will be going out into different areas in Arkansas to speak with people and getting into the swing of his political campaign. But before all the debates and questions around policy dominate the headlines, he said he wanted to share a personal story that will hopefully give Arkansans more insight into how he will serve.

“I can’t hear out of my right ear,” Jones shared. “I’ve always had to work a little harder to hear and listen. The good thing is, it has helped me to develop a good muscle for listening. I want folks to know that I value listening. I don’t care if you are a janitor or a CEO… I value your voice equally and I want Arkansans to know that.”

Primary elections are unofficially scheduled to take place on May 24, 2022, according to the Arkansas Secretary of State’s office. Next year’s general election will be held on November 8, 2022.