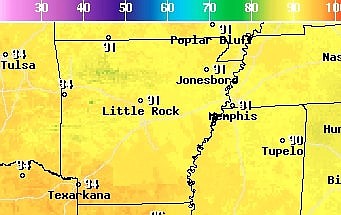 According to the National Weather Services, temperatures are expected to be in the high 90s this afternoon.

The National Weather Service issued a heat advisory Monday and another for this afternoon, and the high temperatures local residents are feeling are likely to continue throughout the week at least, said Justin Condry, a meteorologist at the Little Rock NWS office.

"The heat advisory is issued when heat index vales reach 105 (degrees Fahrenheit) to 109 -- after that, it would be an excessive heat warning -- but basically, with a heat advisory, we have to look at the heat index. That's calculated by taking the current temperature, and then you have to factor in the relative humidity, which gives the air that more sticky feeling," Condry said Monday afternoon.

The heat is being caused, he said, by an upper level ridge of high pressure, which is also bringing in the thunderstorms that struck the area Monday afternoon.

"You have high pressure that's currently to the east, and there's a counterclockwise rotation, so you're getting the southerly flow from the Gulf of Mexico," Condry explained. "That's where you're getting that humidity."

Typically, temperatures in south Arkansas in late July might reach 90 or so degrees, he said; however, because of the high pressure system moving in the area, temperatures are currently expected to stay above average for the next eight to 14 days, per the Climate Prediction Center, another agency of the National Oceanic and Atmospheric Administration like the NWS.

"For the next couple of weeks, we'll likely be remaining above average at least," Condry said. "Once we get to the middle of August, it'll start getting back to average (temperatures), or below average."

Condry said that for those working outside or doing other outdoors activities during the day over the next couple of weeks, it will be important to monitor how they're feeling and rest often, as the high heat combined with the humidity can make one vulnerable to heat exhaustion or a heat stroke.

"Definitely the biggest thing is to make sure you protect yourself, whether that's a hat or putting on sunscreen, but also just stay hydrated and take a lot of breaks. In heat like this, it doesn't take long to get dehydrated," he said. "Taking stuff slow, going inside, taking a break more often that you usually would ... watching for signs of anything that might seem uncommon for you if you're normally okay outside. Heat can affect people differently."

He said those who are outdoors should drink plenty of water and take breaks as they feel it's necessary.