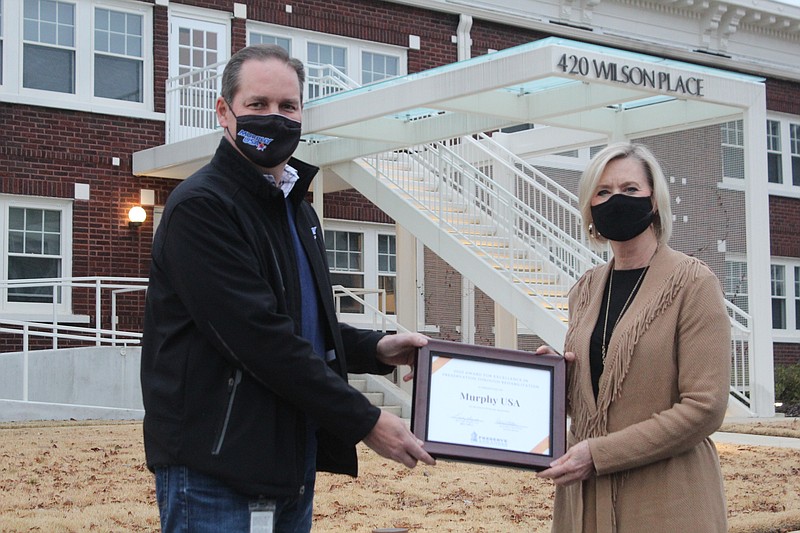 Murphy USA received the Award for Excellence in Preservation through Rehabilitation from Preserve Arkansas for restoration work done to the apartments at 421 Wilson Pl. in El Dorado. Kathy Boyette presented an award certificate to John Moore, MUSA senior vice president, on Wednesday.

The building is located at 421 Wilson Pl.

According to a press release from Preserve Arkansas, the building was originally constructed in 1926 by the Smith Real Estate Company, “an example of the support structures which appeared in this small Arkansas town following the discovery of oil in 1921.” Its purpose was to provide “upscale accommodations” for the many visitors and fortune-seekers then occupying the town.

“When the building opened it was hailed by the El Dorado Daily News as providing ‘ultra-modern luxurious accommodations’ like daily maid service, janitors and ice delivery,” the press release states.

The goal of the restoration team was “to preserve the building’s historic character and retain original features.”

The restoration, however, is not purely aesthetic.

MUSA Senior Vice President John Moore said the apartments have been converted into corporate housing for the company.

The apartments, Moore said, appealed to the company both for their historical significance and their convenient location in close proximity to MUSA’s headquarters in downtown El Dorado.

The apartments are used to house MUSA employees, visitors and guests in both short-term and long-term engagements. Moore said that he has even used the apartment lounge to conduct job interviews due to the space allowing social distancing.

Original facets of the building, such as wall panels meant to function as ice boxes and features of the studio apartments including ironing boards built into the wall and murphy beds remain, while much more modern amenities are seamlessly blended into the old.

According to Preserve Arkansas, the “most dramatic change was the reconfiguration of the building’s backyard.”

In the backyard, a “non-historical” fire escape was replaced and a ramp was added for accessibility, a fence was removed and a series of mechanical units replaced.

Exterior work also included “complete restoration” of the historical windows and “repairs to the building’s masonry, cornice and roofing system.”

Changes on the interior include the removal of four non-historical interior stairs and that systems including mechanical, electrical, plumbing were placed. Among the features restored were the original millwork, doors, decorative fixtures, wood flooring and trim, according to Preserve Arkansas.

Moore said that the brick exterior of the building was restored, and other features such as the interior stairwells are original.