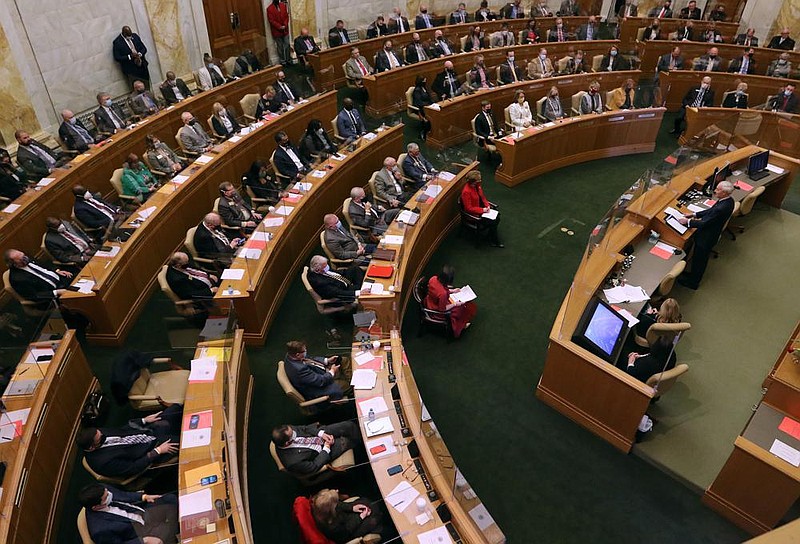 The bill on the floor would impose up to 20% additional jail time or fines for targeting someone because of several factors, including race, religion, sexual orientation or gender identity.

The bill has strong support from state Democrats, but has seen objections from some conservatives, according to reporting by the Associated Press.

Garner recently penned an op-ed, which was distributed by the Arkansas Senate press office, detailing his opposition to the bill, where he highlighted “Christian bakers,” a reference to the 2018 Supreme Court verdict that ruled in favor of Jack Phillips, a Colorado baker who argued forcing him to bake a cake for a same-sex couple violated his religious rights under the United States Constitution’s First Amendment.

“It won’t be long until we see examples of Christian bakers being forced to abandon their beliefs in order to stay in business or our pastor’s sermons being labeled as hate speech,” Garner wrote in the op-ed, which was titled, “Don’t let hate win.”

Arkansas is one of just three states in the country that does not have hate crime laws enacted, according to the AP; South Carolina and Wyoming are the other two. In 2019, 15 hate groups were tracked by the Southern Poverty Law Center within the state.

Gov. Asa Hutchinson has made passage of the bill a priority, first proposing hate crimes legislation for the state last August and going on to highlight the bill during his State of the State address Tuesday.

Garner said he opposes the proposed law. Online criticism to the distribution of the column through the state Senate press office, was, he said, a “non-story.”

“This is a typical thing that elected officials do,” Garner explained. “We have a press secretary who vets and sends off things on my official office’s behalf. Senator (Jim) Hendren (R-Gravette) sent out a press release in support of the hate crimes bill through the state senate press office and there was no controversy about that.”

John Reed, the Public Information Officer of the State Senate confirmed that there are no current protocols restricting the distribution of op-eds or press releases from the Senate press office.

In his op-ed, Garner says there is no evidence that having such a law would reduce hate crimes and that the bill would be one of the most extreme of its kind in the entire nation.

“The bill is one of the most extremist versions of Hate Crimes in the nation. Rep. Nancy Pelosi and Rep. Alexandria Ocasio-Cortez couldn’t have dreamed up a more damaging and dangerous threat to civil liberties and equality. It doesn’t define what ‘hate’ actually is. Nor does it limit the crimes that fall under its provisions,” Garner wrote.

Michael Lieberman of the Anti-Defamation League said to the Nation Public Radio (NPR) in 2015 that while there isn’t concrete evidence that shows hate crime laws reduce hate crimes, there is evidence that minority demographics that are often the targets of hate crimes are more likely to come forward and report a hate crime if they know their state or jurisdiction would support them.

“Why would you report that you were the victim of a hate crime unless you thought police were going to do something about it?” Lieberman said. “If a city passes a strong hate crime law … it demonstrates that the city is now taking these crimes very seriously.”

Hate crimes in the U.S. rose to the highest level in more than a decade in 2019 as federal officials also recorded the highest number of hate-motivated killings since the Federal Bureau of Investigations began collecting that data in the early 1990s, according to an FBI report produced in Nov. 2020.

As an alternative to the hate crimes bill, Garner says he supports reforms on criminal justice, policing and civil liberties, including a “Ban the Box” initiative. Ban-the-box laws prohibit employers from asking about a person’s criminal history on a job application.

“We know that the felon status disproportionately impacts the African-American and minority communities and supporting this legislation would basically allow felons to have their record clean after five years,” Garner explained.

“This would allow them to get an occupational license and pursue careers such as being a barber or any other profession without having that felony record tied around you and holding you back,” he added.

Garner’s peers, both Republican and Democrat have shown support for the hate crime bill.

“A bipartisan approach is needed for this bill to pass,” Hendren, who served as Senate president pro tempore during the 92nd General Assembly, is planning to run for governor in 2022 and who is Hutchinson’s nephew, said in a Jun. 26, 2020 statement. “I know we can protect people who are potential victims of hate crimes, while at the same time instilling common sense procedures that will prevent abuse.”

“No Arkansan should live in fear of being targeted for a crime because of who they are, what they look like, what they believe, or who they love. It is time for Arkansas law to send the clear and unmistakable message that hate has no home in our state” state Rep. Nicole Clowney, who helped write the draft bill, said in a June 26, 2020 press release.

Garner said he feels the bill will actually exacerbate inequality in Arkansas.

“Equality is about people being equal under the sight of our law,” he said. “If you’re going to start saying certain lives are more important than others, I think we are taking a step back rather than moving forward.”

Garner said he believes strides are being made toward equality and that he views the hate crimes legislation being proposed as a step backwards.

“That is something we need to fix and I’m happy that we’re making strides towards it (equality) but we’re not going to allow additional penalties; you’re not going to fight inequality with more inequality,” Garner said.

Arkansas Speaker of the Arkansas House Rep. Matthew Shepherd (R-El Dorado), who was re-elected by his peers in the House for a second term as Speaker on Monday, said he is looking forward to engaging in dialogue on the hate crime bill.

“I know of at least one bill filed and there could be multiple bills filed addressing the issue as we move forward,” Shepherd said in an email to the News-Times. “There are varied opinions among the members as to what should and should not be included in that legislation. I anticipate substantial debate on the issue as it goes through the legislative process and I’m open to that discussion.”