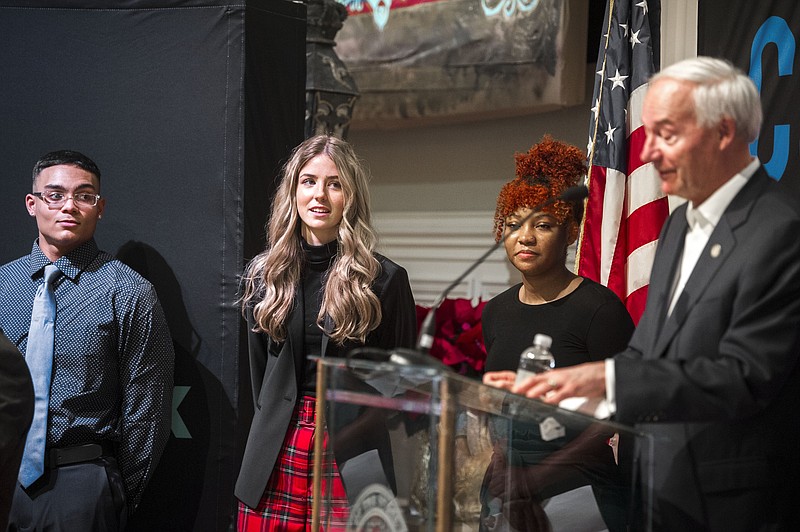 (From left) Caden Das, Sarah Humphries, and La'Mia Crutchfield, High School students from throughout the state, stand to the side as Governor Hutchinson addresses the media during a press conference at the 2021 Computer Science Education Week Kickoff Event at the Governor's Mansion on Friday, Dec. 3, 2021. Computer Science Education Week is an annual call to action to inspire K-12 students to learn computer science, advocate for equity, and celebrate the contributions of students, teachers, and partners to the field, according to the csedweek website. (Arkansas Democrat-Gazette/Stephen Swofford)

Gov. Asa Hutchinson says his top priorities for his final year as governor include bolstering investments in workforce training and infrastructure, creating what he called "new economy" jobs, and strengthening Arkansas' families.

"It's all about WINS in '22," the governor said, referring to workforce training, infrastructure, new economy jobs and strengthening Arkansas families.

"I want to run through the table, and I think this reflects a very ambitious agenda for the last year," Hutchinson said in an interview last Monday.

The governor said he considers the Dec. 7-9 special session the most impactful special session in the past seven years. In that session, the General Assembly and the governor enacted what he has described as the largest tax cut in state history, plus incentives aimed at persuading U.S. Steel to expand in Mississippi County. The proposed U.S. Steel expansion would include a $3 billion investment and creation of 900 jobs, according to legislators. State officials project that the income tax cuts will eventually be $500 million a year.

"That's just a sign there is not any slowing down," said Hutchinson, who has been governor since January 2015 and is barred from seeking reelection under the state's term-limits amendment. "I got elected governor to be the jobs governor."

While in office, Hutchinson has been challenged by the COVID-19 pandemic since the coronavirus arrived in Arkansas in March 2020.

"I think Arkansas is in pretty good shape," he said. "That [pandemic] always takes time and attention. I think it is going to take time in January, so the next couple of months will be challenge for us."

"We have made great progress" in the past six years, he said, noting that 54 high schools didn't have access to a career training center when he started as governor, and that number is down to one.

The governor said he also wants to increase the quality of workforce training.

"Part of the goal is to bring more people into our labor force, or to give them higher skills to simply improve their income level," Hutchinson said.

Among other things, the American Rescue Plan workforce development and human capital working group -- chaired by state Commerce Secretary Mike Preston -- recommended in late August $61.1 million for the Office of Skills Development, and $17.6 million for the Arkansas Economic Development Commission, according to Commerce Department records.

These recommendations included $35 million for the Office of Skills Development to build and equip an advanced manufacturing and robotics training center; and $13.8 million for the Arkansas Economic Development Commission to expand the Future Fit program at colleges to train up to 3,000 individuals in basic skills that are required by most employers.

"No final decision has been made since we had to use a significant amount of the funds to fight the [COVID-19] delta variant and to support our hospitals," Hutchinson said. "The recommendations will be an important consideration as decisions are made for future workforce training investments. Some are currently being looked at for alternative funding sources as well."

Hutchinson appointed a steering committee to make recommendations on the best use of those funds; $112.7 million of them haven't been allocated, according to Department of Finance and Administration records. The state expects to receive $1.57 billion in American Rescue Plan state recovery funds in total and to get the other half of the funds in the summer of 2022, said Department of Finance and Administration spokesman Scott Hardin.

Hutchinson said his second major priority is infrastructure, including increased investments in broadband expansion, water projects and other major projects ranging from highways to irrigation systems.

Much of the increased investment that he aims for will come from federal funds available to the state under the federal Infrastructure Investment and Jobs Act signed by President Joe Biden last month, as well as the federal American Rescue Plan act signed by Biden in March, he said.

Last Monday, Hutchinson signed an executive order creating a 14-member advisory committee to make recommendations on the best uses of federal funds under the Infrastructure Investment and Jobs Act.

"The advisory committee's purpose is to make sure the state uses the funds from the infrastructure bill as efficiently and productively as possible," he said. "I wanted people from different departments and agencies engaged in the planning and recommendations so that we are not all operating in silos, but we are coordinating on this historic opportunity to invest in infrastructure."

Last month, the White House estimated that Arkansas would receive more than $4 billion for a variety of broad infrastructure needs over five years under the new federal law.

Besides increased federal highway, bridge and public transit money, the funding includes about:

- $54 million for expanding a charging network for electric vehicles;

- $23 million to defend against wildfires;

- $16 million to shield against cyberattacks over five years;

- And a minimum of $100 million for broadband expansion, according to White House estimates.

Hutchinson said the water issues that need funding include local water and sewer projects, and there are hundreds of millions of dollars more in needs than funds that are available.

The Grand Prairie Area Demonstration Project is in portions of Arkansas, Lonoke, Monroe and Prairie counties, and the Bayou Meto Basin Project stretches through parts of Lonoke, Prairie, Jefferson, Arkansas and Pulaski counties. Hundreds of millions of dollars have been invested in the two irrigation projects that are important for conservation, and saving water and timberland, the governor said.

"My goal is to find sufficient funding so that the districts can get on the pathway to being operational," Hutchinson said. "The time-frame is determined by when the funds are available and the specific time needed for further construction. Both projects are to be constructed in phases. I am trying to get the water flowing, but that does not mean there will be sufficient funds to complete all phases."

The construction schedules for the two irrigation projects are currently limited by annual federal appropriations, according to the working group's report.

The working group's initial report has not been considered by the full American Rescue Plan steering committee yet because of needs created by the coronavirus and other funding considerations, said Amy Lyman, spokeswoman for the Department of Agriculture.

Hutchinson said the "new economy jobs" that he aims to create include those in advanced manufacturing and technology sectors.

"We are in an incredible position to increase our jobs, increase our growth this year," he said. "I expect announcements shortly after the first of the year, and I expect that to continue through the course of the year."

The state's advanced manufacturing opportunities range from the steel industry to autonomous vehicles to the lithium industry, Hutchinson said.

He noted that he met recently with a chief executive officer of a technology company that employs about 1,200 workers with offices in Minnesota and Salt Lake City who heard about the state's computer science initiative and training of technology workers. That CEO wants to recruit the state's technology workers and allow them to work in their homes and the communities.

"To me, that is part of the new economy," Hutchinson said. Before the pandemic, companies would try to lure the state's technology workers to their offices in places like the Silicon Valley in California; Austin, Texas; and Charlotte, N.C., Hutchinson said

The governor said he aims to reduce the number of developmentally disabled people on the state's waiting list for services, expand health care opportunities for families through the state's Medicaid expansion program, and address the needs of children in foster care and those suffering from abuse.

On Dec. 14, Hutchinson announced his plan to provide services by June 2025 to the 3,204 people on the state's waiting list for people with intellectual and developmental disabilities who want to stay in their homes and communities.

Last Tuesday, the federal government approved a request from the state Department of Human Services for a waiver to retool Arkansas' version of Medicaid expansion that provides health insurance to more than 300,000 low-income Arkansans. The program, now called Arkansas Works, will be called the Arkansas Health and Opportunity for Me, or ARHOME, starting Jan. 1 and ending Dec. 31, 2026, under the waiver from the U.S. Centers for Medicare and Medicaid Services.

"These are goals I share with the General Assembly," he said.

"The broadband is somewhat of a challenge on the infrastructure side because there is always going to be [questions about] where does the money go, is it going to go out in a fair way, so we've got to work closely with the General Assembly on the funding on that infrastructure and to get it right," the governor said.

"I think we are on target to do that, but that's something that is going to build legislative support for."

As for his plans after his term as governor ends in January 2023, Hutchinson said, "No decisions have been made."