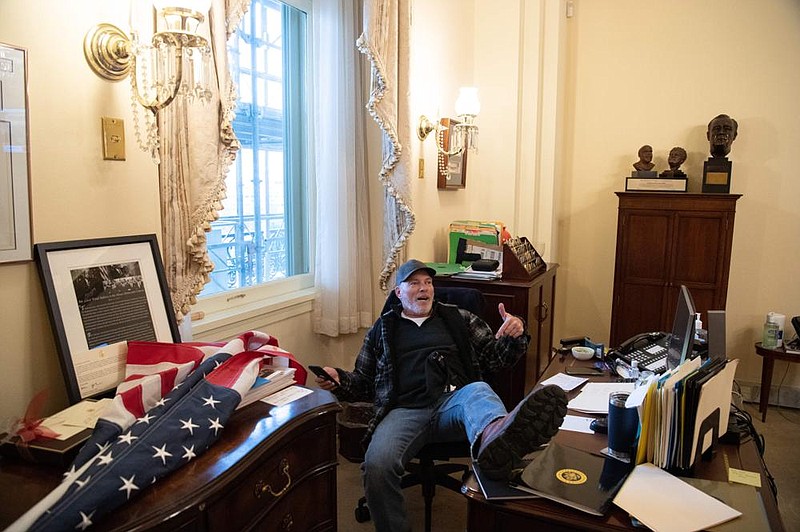 Richard “Bigo” Barnett is seen sitting in the office of House Speaker Nancy Pelosi after rioters stormed the U.S. Capitol on Jan. 6. (Special to the Democrat-Gazette/AFP/Getty Images/Saul Loeb)

The case of a Gravette man charged in the Jan. 6 U.S. Capitol riot has been postponed for another three months to give federal prosecutors more time to pore through evidence.

Richard "Bigo" Barnett, 61, faces seven charges in connection with the incursion, including one accusing him of being in the Capitol with a dangerous weapon -- a stun gun. Barnett was photographed with his feet on a desk in House Speaker Nancy Pelosi's office suite.

In a teleconference Tuesday in federal court in the District of Columbia, Assistant U.S. Attorney Mary L. Dohrmann asked for the extension, saying prosecutors are busy with many cases stemming from the breach of the Capitol that day.

"The discovery pertaining to Mr. Barnett is particularly voluminous," Dohrmann told the court.

Barnett's attorney, Joseph McBride, told the judge that he was OK with the extension because his client is at home in Arkansas and no longer in jail. Barnett was incarcerated from Jan. 8 to April 27, first in Fayetteville and later in Washington, D.C.

McBride told the court that his defense team needs access to certain areas at the Capitol.

Dohrmann said she didn't have an answer to that question Tuesday morning but she would research it and get back to McBride.

"We're talking about an area of the Capitol, with certainly private rooms that were entered on the day of the breach -- that the U.S. attorney's office does not have control over -- so I do not know the answer to whether those will ever be made available and what my office's role is in that," Dohrmann said.

"I believe that they have not been made available to anyone. So I don't believe that there's anything specific to Mr. McBride or Mr. Barnett's case. I think that that was strictly a blanket prohibition on entering into that room at this point."

District Judge Christopher R. Cooper said this was a "new issue" in the case.

"If you all cannot come to ground on those issues, Mr. McBride, you're always free to file a motion," Cooper said near the end of Tuesday's teleconference.

"This is obviously a new issue, so I will refrain from making any comments about it at this point."

A spokesman for Pelosi's office didn't respond to an email sent Tuesday asking if she had allowed attorneys for Jan. 6 defendants to access her offices to help prepare their defense cases and whether she would allow such access.

Barnett's next status hearing is scheduled for Nov. 23.

The Jan. 6 riot escalated from a "Stop the Steal" rally in which supporters of former President Donald Trump entered the Capitol and attempted to stop Congress from certifying the Electoral College vote indicating that Joe Biden had won the presidential election. Five people died in connection with the riot.

Two other Arkansans also were arrested in connection with the riot: Peter Francis Stager of Conway and Jon Thomas Mott of Yellville.

All three have pleaded innocent.

Trials haven't been scheduled yet in any of those three cases.

Information for this article was contributed by Frank E. Lockwood of the Arkansas Democrat-Gazette.