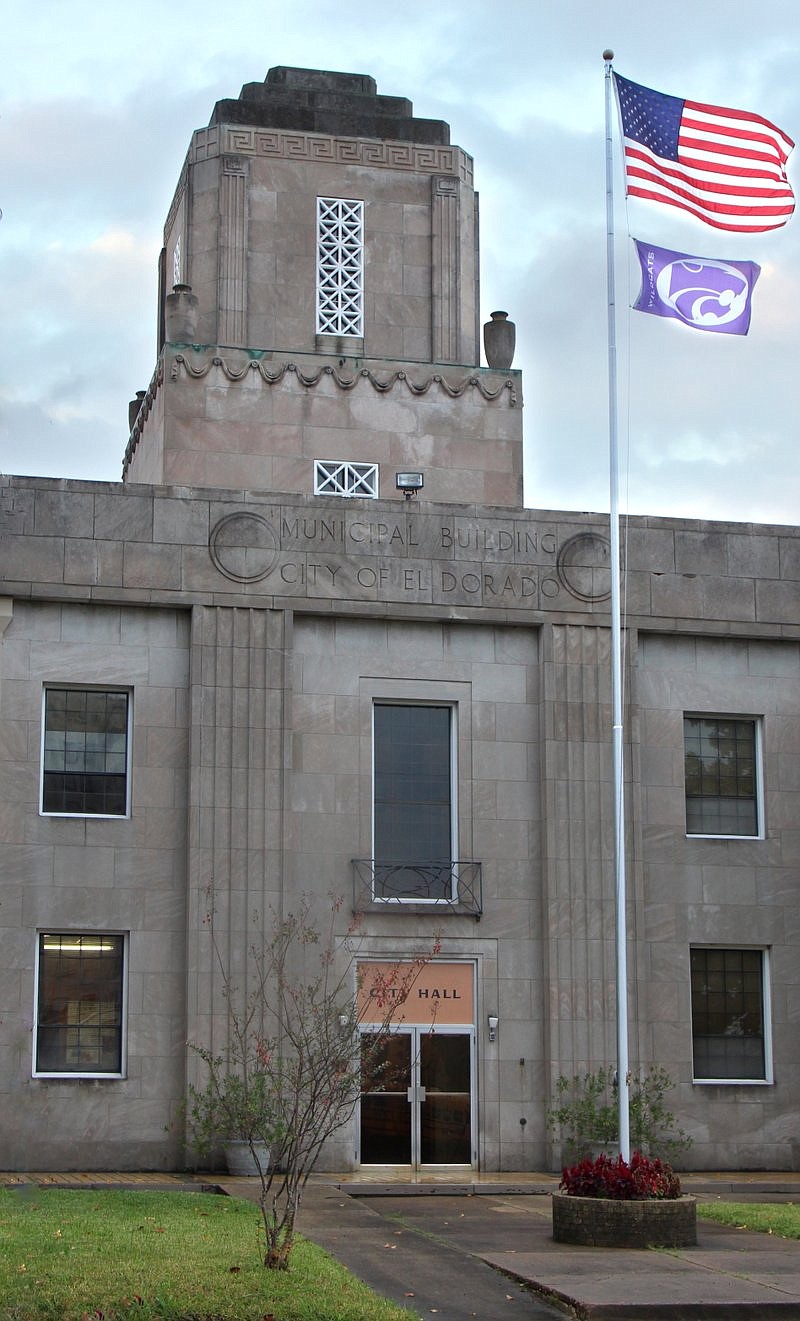 The El Dorado City Council will meet today at 5:30 p.m. at City Hall.

The El Dorado City Council will convene for a regular meeting at 5:30 p.m. today in the Council Chamber of City Hall.

The opening prayer and Pledge of Allegiance will take place at 5:25 p.m.

Council Member Billy Blann is expected to present issues that have cropped up with an ongoing effort to improve and expand the El Dorado-Union County Recreation Complex.

The complex's board of directors addressed the issues during a regular board meeting July 30 and asked Blann, also a member of the complex board, to being the issues before the council.

• The status of a survey that is to be conducted for approximately five acres of land that PotlatchDeltic has offered to donate to the complex.

In March, the council agreed to pay for the land survey in response to a request by Potlatch for a land easement to access other property it owns in the area.

The land Potlatch has agreed to donate is adjacent to the four baseball and softball fields on the south end of the facility and will be considered for future expansion opportunities, including a new baseball field to accommodate older teens and adults and host college baseball games.

Last Friday, Greg Harrison, chairman of the complex board, said he has sent emails to city officials inquiring about the land survey, adding that Potlatch has also asked about the status of the project.

"We can't draw up the deed until we have that survey," Harrison said.

• Plans to lay the foundation for two new kiosks that will be used as concession stands to serve the baseball, softball and new soccer fields on the south end of the complex.

Murphy USA has donated the kiosks, which are used at many of its retail gas stations across the country.

Union County Judge Mike Loftin said the county will transport the used kiosks from Atlanta and the city will take care of laying the foundation and infrastructure for utilities -- all at an estimated cost of $50,000.

Complex board members and Robert Edmonds, director of public works for El Dorado, have said they want to coordinate the components project so that the foundation is set by the time the kiosks arrive.

Harrison said the county is ready to ship the kiosks to El Dorado.

• Ongoing maintenance issues with windscreens on the four baseball and softball fields that take up the north side of the complex.

The windscreens went up last year as part of the master improvement and expansion plan and board members have said that because of the way the windscreens were installed, they tear easily and become loose, making them more susceptible to wind damage.

Board members said the contractor, ERC General Contractors, poked holes in the windscreens and used zip-ties to secure them to the fence.

Harrison said Texarkana-based A.L. Franks Engineering, who is overseeing the master improvement plan for the complex, discussed the issue with ERC, who addressed the issue late last summer.

However, Harrison said ERC used the same methods to secure the windscreens into place and they have ripped away from the fence again, even though the complex board requested bull rings.

Harrison said he learned that ERC has said it will not come out a second time to address the problem.

When Nichols Fence Company of Stephens installed new fencing, the company used bull rings for windscreens on two of the fields, with Harrison noting that fields 1 and 2 do not have bull rings.

"So, they've got to be replaced or removed. The ones that's there can't be repaired. The second thing is, who's going to pay for that?" board member Stacy Scroggins asked.

Added board member Chris Nale, "It looks horrible. It looks bad when you drive out there."

"The city council needs to decide if we want to purchase new windscreens or remove what we have," said Harrison.

• Washouts that are occurring near the new soccer fields southwest of the Dumas Pavilion. The fields are expected to open in the fall.

Phillip Lansdell, an ex-officio member of the complex board and athletic director for the El Dorado School District, has said stormwater is washing mud against the gate for the El Dorado High School softball field.

The high school baseball and softball fields are located on complex grounds.

The problem is not affecting the soccer fields but Lansdell has said that mud has prevented crews from opening the gates to the water boxes at the softball field.

"It's going to push that fence over," he warned.

Harrison said that he has shoveled away piles of dirt and mud that have washed down to the EHS fields.

Blann said a barrier is needed and complex board members have discussed possibly erecting a retaining wall or building a rock bed in the area.

Lansdell also suggested that the area be sodded.

In other business, city council members will also consider the reappointments of Alexis Alexander and Glenn Faust to the El Dorado Parks and Playgrounds Commission.

Terms for both expire Sept. 1 and both have expressed interest in serving another term, EPPC chairman Ken Goudy said.

Courtney Crotty, tournament director for the Murphy USA El Dorado Shootout, is on the council's agenda to discuss the event.

The shootout, which draws golfers from all over the world, is part of the Symetra Tour and is a qualifying event for the LPGA.

Organizers are reaching out to the community for host families to house golfers and volunteers to help run the tournament.

To serve as a host family, send an email to [email protected] People who wish to volunteer may sign up at https://eldoradoshootout.com/volunteers/.

Golfing experience is not required to fill the more than 450 volunteer shifts that will be available, including cart driver, caddie, marshal, spotter, standard-bearer, parking and main gate workers and more.

Volunteers will have the option to work hourly, full or half-day shifts.

For more information about the shootout, send an email to [email protected]