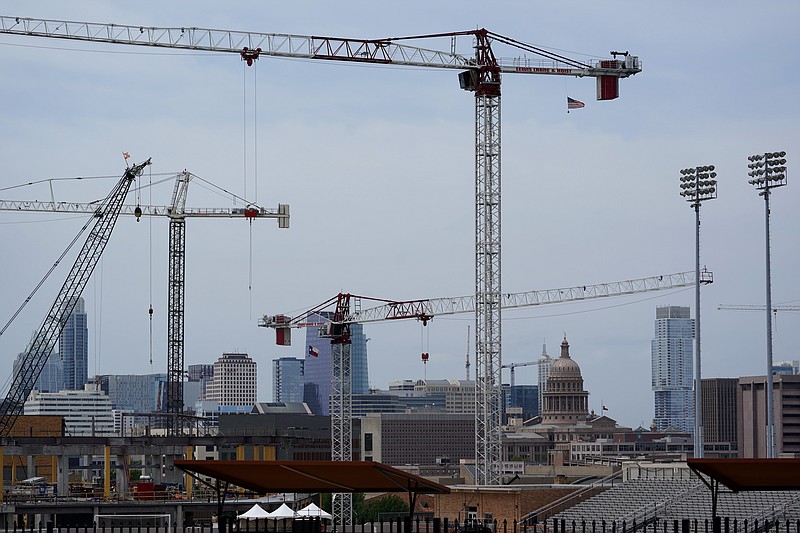 Construction cranes hover over downtown and near the State Capitol, Monday, April 26, 2021, in Austin, Texas. Texas' torrid growth over the past decade is paying off with a major boost in political clout. (AP Photo/Eric Gay)

AUSTIN, Texas (AP) — Texas’ torrid growth over the past decade is paying off with a major boost in political clout — two additional congressional seats and electoral votes deepening its already massive influence in the nation’s politics.

New U.S. Census Bureau figures released Monday confirm the relentless population boom in America’s biggest red state. Since 2010, Texas has gained nearly 4 million residents — more than any other state in sheer numbers. For perspective, that’s roughly the entire population of neighboring Oklahoma. And yet, some advocates say immigration concerns and lack of funding for education and encouragement of census participation may have led to Texans being undercounted.

It is now home to more than 29 million people, second in population only to California, which has nearly 40 million. Texas has sustained double-digit percentage growth and increased congressional representation for 80 years, following in trend with its neighboring Southern states, the region with most growth at over 10 percent.

The constitutionally mandated 10-year census determines, among other things, how the fixed number of U.S. House seats and presidential electors will be allocated. The 2020 data was released after months of delays and a head count conducted during the coronavirus pandemic, a heavy hurricane and wildfire season and amid civil unrest.

Texas will now have 38 congressional representatives— gaining more seats than any state— and 40 votes in the Electoral College.

Political tensions are expected to continue to rise as the state grows less white and more urban, demographics Democrats typically find favorable. Despite that, Republicans have managed to keep a tight grip on the state’s political power.

They also will be in charge of the once-a-decade redistricting once the more detailed community-level census data comes out in late summer, and are expected to create gerrymandered legislative and congressional districts designed to keep them in power.

“We are going to encourage our activists across the state to participate in that process at all levels of government,” said Rose Clouston, voter protection director for Texas Democrats. “From the state Legislature, that is going to be drawing our congressional and state legislative maps, to our local city council and county commissions that are going to be drawing maps for their own districts.”

Clouston said she was frustrated by what she believes to be an under-count of Texans due to a combination of a difficult year, a lack of participation and after she said Texas was the only large state not to allocate resources early on to educate and encourage Texans to participate in the census. Now, Clouston said the state could be loosing out on millions in federal funding if the population was under-counted.

“The Trump administration spent years fomenting concern and fear within many immigrant communities in Texas and also bungled the execution of the census,” Clouston said.

Charlie Bonner, communications director for MOVE Texas Action Fund, an advocacy organization, said he was surprised to see Texas only gain two seats. He said while this shows growth of communities of color and young Texans, whom he hopes will be represented in the upcoming redistricting of the state, he said he considers this too a failure for Texas in the lack of resources diverted to increasing participation. Additionally, he said the Trump administration’s push for a citizenship question and the resulting national debate “ate up critical time and also sent many communities a false narrative about the census that must include every American.”

However, Joshua Blank, research director for the Texas Politics Project at the University of Texas at Austin, said while was an increased perception in the days preceding the data release that Texas would gain three congressional seats, given how little congressional seats shifted nationally, today marks a win for the state. Nevertheless, he said while he has full confidence in the U.S. Census Bureau’s count, he recognizes the census “generally undercounts some populations that are extremely hard to enumerate and the pandemic only exacerbated those difficulties.”

Blank said populations that don’t live on marked roads, as well as concerns from communities of color that the census data would be used against them, such as for immigration enforcement, are among the factors that could have contributed to lower numbers.

While the new census report does not include demographic data, Texas State Demographer Lloyd Potter said estimates show that rural counties continue to lose population while metro areas such as Houston, Dallas and Austin continue to grow. Hispanics make up the largest percentage of growth, Potter said, pushing them closer to a plurality of the overall population.

Half of Texas’ population gain comes from births, helping the state maintain a young median age, Potter said. Another major factor has been an ongoing influx of people from other countries and states, particularly California. Census Bureau demographers said Texas’ population growth in 2020 was about 1 percent lower than expected, leading to one less congressional seat than predicted by state researchers, but said they were confident in the statistics.

That may sound good to Democrats, but according to Blank it’s no guarantee that the new arrivals will automatically align with their party. Democrats will have to figure out how to capitalize on the state’s demographic changes, he said.

Democrats’ last opportunity — the November election — was a bust. Republicans continued their more-than-two-decades of control of statewide offices, retained power in both houses of the Legislature and kept Texas in the win column for former President Donald Trump, despite his eventual loss to Joe Biden.

What Texas Democrats hope will mobilize the party is the GOP-led campaign to tighten voting laws across the U.S. In Texas, that effort aims to outlaw drive-thru voting and 24-hour polling places, and to criminalize unsolicited absentee ballot applications. Those were all options that election officials in Houston — the biggest Democratic stronghold in Texas — used or planned last fall to expand voting access during the pandemic.

Texas GOP chairman Allen West said in a statement that his party will “await the affirmed census results and will continue to deliver our message of economic growth, prosperity, individual Liberty and rights, quality education, small business entrepreneurship, and safety/security.”