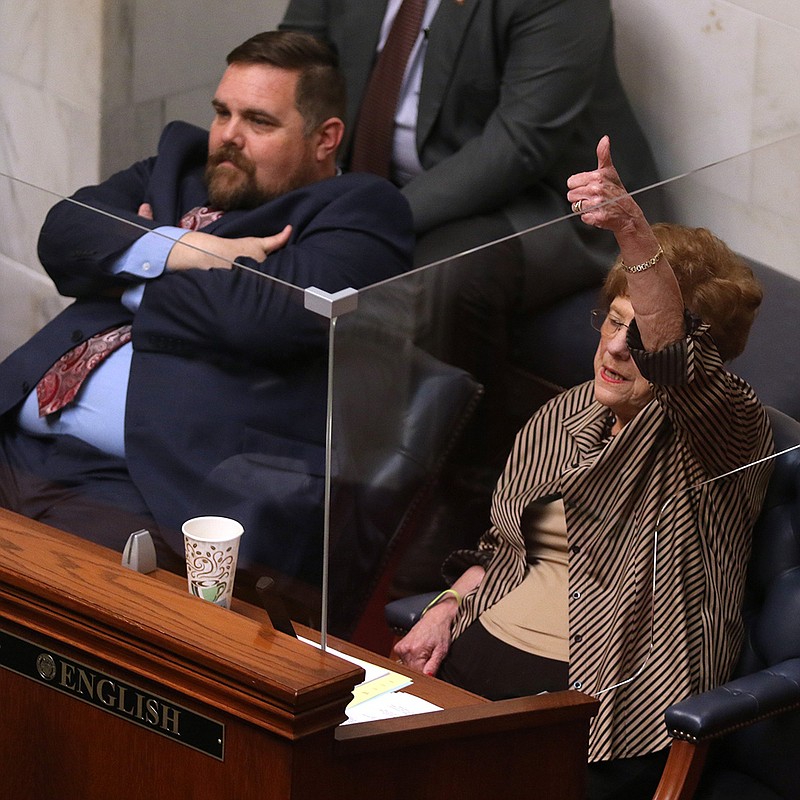 Sen. Jane English (right), R-North Little Rock, votes to confirm Secretary of Health Dr. Jose Romero, as Sen. Bob Ballinger (left), R-Ozark, looks on during the Senate session on Thursday, April 8, 2021, at the state Capitol in Little Rock. Ballinger voted against confirmation, but Romero was confirmed by a vote of 25-8. (Arkansas Democrat-Gazette/Thomas Metthe)

The Arkansas Senate on Thursday handily voted to confirm Gov. Asa Hutchinson’s appointment of Health Secretary Jose Romero, who has been at the helm of the Department of Health for much of the covid-19 pandemic.

The Senate Rules Committee held a hearing earlier Thursday about the matter, and the 10-member committee voted 7-3 to forward Romero’s confirmation to the 35-member Senate.

Afterward, Hutchinson said he was very pleased with Romero’s confirmation.

“The vote was bipartisan and by a very favorable majority,” he said in a written statement.

“Anytime you are in a position of responsibility during a pandemic you will undoubtedly suffer some criticism and second-guessing. His confirmation is a recognition of his experience, leadership and devotion to public service,” Hutchinson said.

Asked why Romero didn’t attend the Senate committee’s hearing, the governor said, “it was understood that there was no need for further testimony since Dr. Romero has already testified numerous times before various legislative committees.”

Health Department spokeswoman Meg Mirivel said Thursday in a written statement that “Dr. Romero did not receive a request to appear today.” Asked if Romero had any comment about the Senate’s vote, Mirivel referred a reporter “to the Governor’s statement.”

In August, Hutchinson announced that Romero would replace Nate Smith, who accepted an appointment at the U.S. Centers for Disease Control and Prevention. The governor’s appointment of Romero as health secretary came after Romero served as interim secretary last year from May until August.

Romero previously was the department’s chief medical officer and is the chairman of the CDC’s Advisory Committee on Immunization Practices, which has provided guidance nationally on the development and administration of covid-19 vaccines.

His annual salary is $273,779. He also is a professor of pediatrics in the University of Arkansas for Medical Sciences’ College of Medicine and an infectious disease specialist at Arkansas Children’s Hospital.

Rapert told senators, “I don’t have any problem with Dr. Romero on a personal basis, his career, [and] his professionalism.

“This is about executive decisions that have affected the state of Arkansas over the last several months, especially during 2020, and frankly what I think is a lack of accountability,” he said.

Rapert referred to testimony to lawmakers in August from Dr. Sandra Young of London, a part-time doctor at the Conway Human Development Center, who said she resigned in June because she didn’t believe she could prescribe hydroxychloroquine to the center’s residents. She said she made that judgment based on an email that she received from Romero.

But Romero testified at the time that while he didn’t recommend or endorse the use of hydroxychloroquine to treat covid-19, he hadn’t prevented other doctors from using the medication. He said doctors are free to use the medication off label if they and their patients think it’s appropriate.

Rapert told his colleagues Thursday that “we had members in this body that said they used hydroxychloroquine and it helped.” He said it bothers him that Romero made decisions during the pandemic that were unnecessary and over-burdensome, and won’t be held accountable for them.

“We are just saying there is plenty of doctors and physicians and experts in this state and this country that would fill this role that might just have a little better presence about them and might be able to handle the pressures of the position a little better and not get mad and bark with a state senator, who is just trying to get out of the hospital after surviving covid-19 and act like you are going to put him under house arrest,” Rapert said.

Bledsoe, who is chairwoman of the Senate Public Health, Welfare and Labor Committee, told senators that Romero is a honorable and trustworthy man.

“He is obligated to relay to everyone, physicians included, what the Arkansas’ directives and guidances are,” she said.

The department and the entire health care establishment learned a lot during this worldwide pandemic and should be commended with the pandemic showing signs of abating, though it’s not over, she said.

“We absolutely need Dr. Romero to continue as secretary of health, and not to allow him to continue … would be a travesty to him, ADH and the citizens of Arkansas,” Bledsoe said. She said Romero has an impeccable work ethic, and his moral character is above approach.

She said Romero needs to be able to perform his job without having to continuously look over his shoulder, and he deserves to be confirmed to the post.

Garner told senators that he has legitimate questions about Romero’s ability to lead the Department of Health.

“We asked him to show up today [before the Senate Rules Committee, and] he told … this body you are not important enough for me to show up,” he said.

“This is more about the institutional power and the legacy of the Senate in how we deal with the executive branch moving forward,” Garner said.

Sen. Mark Johnson told senators, “don’t be swayed by the fact that we have never done this before.

“We need to take our responsibilities from this point forward more seriously and look at these [gubernatorial appointments] and stand up for the importance of the separation of the powers and for the legislative branch,” he said.

“We are still in a pandemic,” Flowers said. “[Romero has] been right along with the CDC. He operated under Dr. Nate Smith. He is a scientist. He is a doctor, and I don’t believe our governor just summarily or without any kind of thought and review of this man’s record, would have nominated him if he wasn’t qualified to continue as the director of the Health Department.”