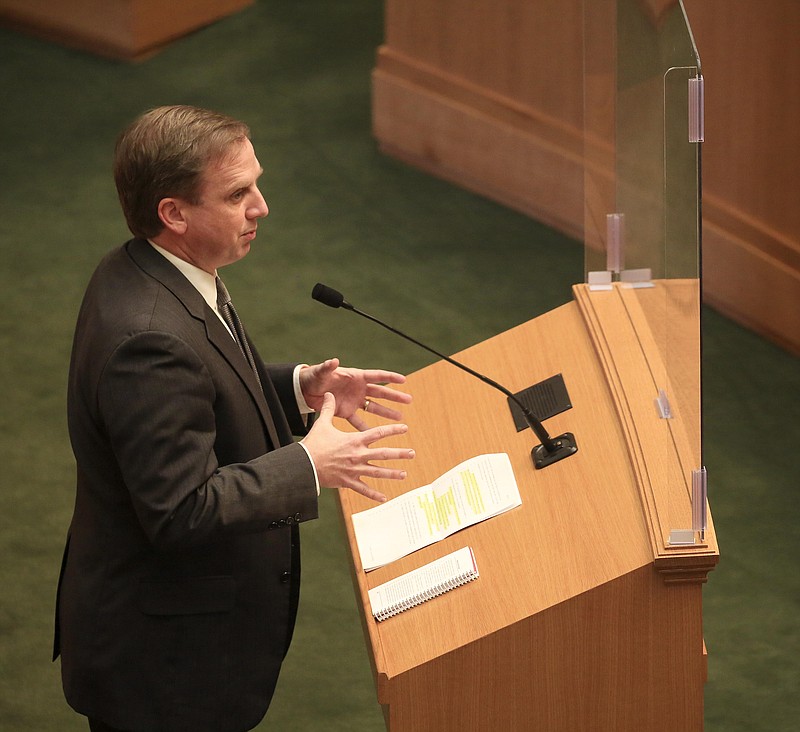 House Speaker Matthew Shepherd, R-El Dorado, defended the chairwoman of the House Judiciary Committee on Friday after she was criticized for refusing to hold a roll-call vote on a motion to send one of the speaker’s bills to the House floor.

The vote Thursday evening on Senate Bill 622 — a so-called class-protection bill being pushed by leaders in the House and Senate — was a divided voice vote. Chairwoman Carol Dalby, R- Texarkana, ruled in favor of the “ayes” to send the bill to the floor.

Dalby, who is a sponsor of the bill along with Shepherd, then immediately gaveled the meeting to a close even as several members asked for a roll-call vote.

The ruling sparked protests from opponents of the bill. Sen. Greg Leding, D-Fayetteville, said Friday on Twitter that the bill should be sent back to the committee “out of respect for the committee process.” Leding pointed to a 2013 decision by then-Speaker Davy Carter, R-Cabot, to send an abortion bill back to committee after objections were raised on the call of a voice vote.

Shepherd said in an interview Friday that he spoke with several lawmakers about the vote, but that no one had asked him directly to overrule Dalby’s decision. He also defended Dalby’s ruling, while saying, “There’s always opportunity to make an appeal.”

“It did sound like the ‘yays’ were louder,” Shepherd said, adding that the bill didn’t receive any special treatment. “I didn’t ask for the bill to be handled in a particular way.”

Shepherd and other sponsors of SB622 have described it as a “class protection” bill that would allow prosecutors to seek limited parole eligibility for violent criminals who select their targets based on their affiliation with a “recognizable and identifiable group.” The bill was proposed in lieu of hate-crimes legislation offering protections for people based specifically on race, sexual orientation and gender identity.

As a proposed solution to Arkansas’ lack of a hate-crimes law, SB622 has drawn opposition from some conservatives as well as Democrats who have typically supported hate-crimes legislation, but who have labeled SB622 a “sham.” The vice chairman of the House Judiciary Committee, Rep. Brandt Smith, R-Jonesboro, could be seen on a recording of the meeting voting against the bill and asking for a roll call. He said Friday that he “wasn’t happy” with Dalby’s call.

“It’s just one of those things, nine times out of 10 they’ll allow” a roll call, Smith said. “It left people wondering what happened.”

Smith said he did not bring up his concerns with Dalby after the vote. Dalby did not respond to requests for comment on Thursday or Friday.

The state Democratic Party released a statement condemning the call, calling it a “parliamentary trick [that] was a tactic used to dismiss minority voices.” House Minority Leader Tippi McCullough said she was unaware of any Democrats who voted for the bill in committee.

Democrats have nine members on the 20-person committee and can block legislation from passing if a single Republican joins them.

Shepherd said House rules allow committee chairmen to deny requests for a roll call and to adjourn a committee when they decide to. He said Dalby’s leadership of the committee was “above reproach” and that she continued to have his support.

The full House is scheduled to take up consideration of SB622 on Monday. A favorable vote on the floor would send the bill to Gov. Asa Hutchinson, who also supports the bill.

Support for the legislation came Friday from the Northwest Arkansas Council and the Northwest Arkansas Chambers of Commerce, which issued a joint statement. The statement said SB622 was “important legislation that will enhance criminal penalties for crimes motivated by hate. While this legislation takes a different approach than was originally envisioned, its passage will help protect victims of crimes motivated by their membership or association with a recognizable and identifiable class of individuals sharing mental, physical, biological, cultural, political, or religious beliefs or characteristics. The passage of this bill will be an important advancement in our criminal law and will give prosecutors a tool to help combat hate crimes.

“Northwest Arkansas supports one of the nation’s fastest growing economies and offers an unparalleled quality of life for its residents. This community is filled with diverse and dynamic talent who contribute to the state’s economic growth with innovative ideas and creative solutions to challenges. We are committed to making Northwest Arkansas an inclusive community that supports all who choose to live here. We must protect our co-workers, friends and neighbors from being targeted for simply living their lives peacefully and authentically.”