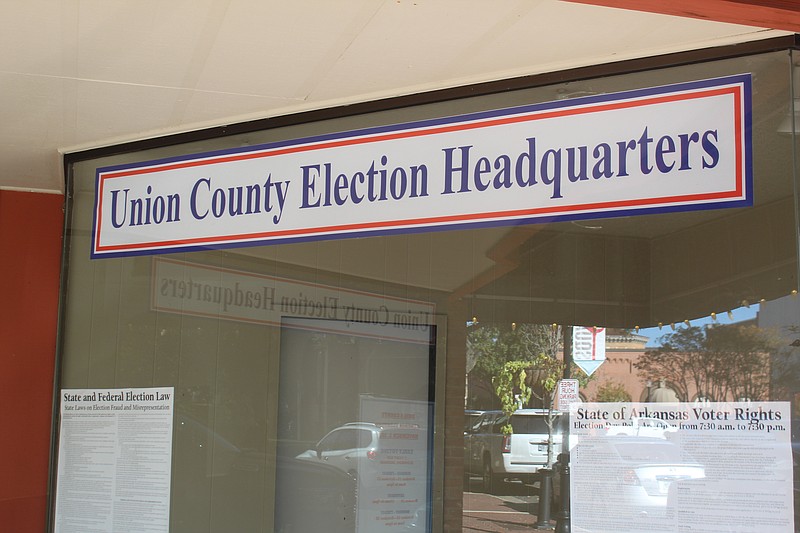 The Union County Election Commission held a training session on Tuesday at the county Election Headquarters at 114 E. Elm St. for the county’s poll workers in the duties, rules and regulations of the job. (Matt Hutcheson/News-Times)

Early voting begins on Monday, October 19, and the Union County Election Commission is in the process of training the county’s poll workers in the duties, rules and regulations of the job.

COVID-19 has forced an altered general election in several ways, including the fact that early voting will now be conducted by poll workers at the county election headquarters on 114 Elm Street in El Dorado.

Commission chair Janelle Williams conducted training for new poll workers Tuesday. Workers are provided with a handbook of rules and Williams took the new workers through a slide show that elaborated on these rules.

Poll workers are trained on what is and is not allowed at voting centers, how to set up the polling centers and the protocols surrounding running the center on election day.

Poll workers must, according to the Arkansas State Board of Election Commissioners, be registered to vote, capable of reading and writing English, be a resident of the precinct served by the polling place at the time of appointment unless otherwise determined by the county election commission and must attend training done by a State-verified trainer.

Additionally, those chosen as poll workers should not have direct conflicts of interest such as being a paid employee of a political party or candidate present on the ballot.

Anyone who has been found or pleaded guilty to Arkansas election law cannot serve as a poll worker.

Poll workers also must sign an oath assuring their intention to perform their duties “to the best of our abilities,” actively seek to prevent fraud and to not disclose how any person votes.

According to Williams all voting centers are required to have at least four workers, although some in the county will have more. Poll workers will staff their sites from 7:30 a.m. until 7:30 p.m. on November 3.

Protocols are in effect if poll workers notice equipment failures or other issues, with all of them centering around quickly implementing a set back-up plan, opening the poll at 7:30 a.m. and keeping it running throughout the day.

The tabulator that is used to process ballots, for example, has an emergency storage slot. If it goes down, ballots can be stored in this storage area until the machine is repaired.

Poll workers will use tablets to check voter registration and other information, but paper back-ups will be provided as well in case of any malfunction with the tablets.

Williams informed the training workers that they will activate the voting equipment on election day before polls open and that one accessible voting machine per polling place is required.

Poll workers will also post required information at the voting center sites, such as sample ballots and voting rights.

This election, poll workers will take on normal responsibilities while also maintaining regiments of sanitizing and social distancing within the voting centers.

Williams explained to the training workers how the cleaning process will work.

“We have all kinds of sanitizer, cleaner and alcohol to clean the machines after each person uses them,” Williams said.

A central part of a poll worker’s job is checking voters in and, in the process, verifying their registration status and identity.

Workers are instructed to ask a voter to speak their name out loud and enter the stated name into the tablet. If multiple voters have the same name, date of birth can be used to further narrow the list.

If a voter’s name varies slightly but is very comparable, the poll worker can move forward with the process. An example of this is a voter who gives their name as “Bill” but the registration says “William.”

Voters are required to complete a voter registration application at the poll site if their name has changed or if the date of birth on their photo I.D. does not match that recorded in their voter registration. After completion of this form, the voter can vote using a regular ballot.

Types of photo I.D.s that are acceptable to verify voter registration vary. Voters can present a valid Arkansas driver’s license or photo I.D., a concealed carry handgun license, a United States passport, a U.S. military I.D. document, a student or employee I.D. issued by a post-secondary education institution, a public assistance I.D. card with a photo or a voter I.D. card issued by a county clerk.

If the voter does not provide I.D., they will be asked to fill out a provisional ballot.

Poll workers can assist a voter only if the voter openly and explicitly requests assistance, and two poll workers must carry out the task.

According to the Arkansas Secretary of State, voters have the right to receive notification in writing whether or not their vote was counted.

Poll watchers are representatives of a candidate, party or group centered around a particular ballot measure who can, following a process of registration and verification, be present at polls during voting to monitor the process.

Only one poll watcher representing any given candidate, party or group can be present at any polling site, according to the State Board of Election Commissioners.

Poll watchers are allowed to observe poll workers. Furthermore, poll workers must allow them to stand close enough to the voter registration area to hear a voter’s name. Watchers are allowed to compile lists of voter names and challenge ballots via notifying a poll worker of the challenge before the voter signs the PVR list. Poll watchers can also bring up any “perceived irregularity or election law violation” to the attention of an election sheriff.

Poll watchers are not allowed to stand within six feet of any voting machine, disrupt the election in any way or speak to voters in a way that is intended to influence their vote.

Electioneering is prohibited at voting sites and poll workers are responsible for ensuring this prohibition.

Poll workers are asked to instruct any voter or other person who enters the voting center wearing or displaying campaign articles to remove or cover them. All campaign material is banned within 100 feet of any polling center on election day or during early voting.

Poll workers are instructed to monitor this 100 foot radius as well as the interior of the voting center itself to remove any campaign material.

The Board’s handbook defines electioneering as means the display of, or audible dissemination of, information that advocates for or against any candidate, issue, or measure on a ballot.