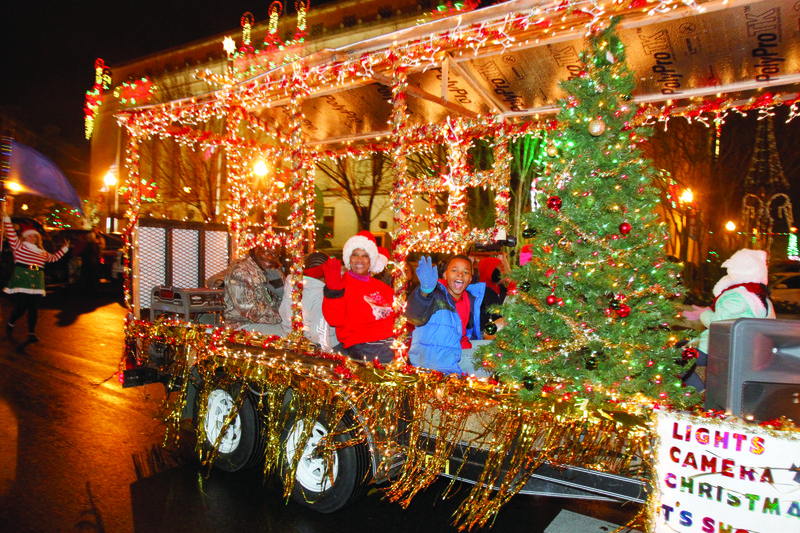 Tradition: This file photo shows the annual El Dorado Christmas parade passing through downtown in 2018. This year's parade is set to be held in a drive-through format in light of the ongoing COVID-19 pandemic.

The El Dorado-Union County Chamber of Commerce will be accepting Christmas Parade entries until 4 p.m. tomorrow. Parade entry forms can be found at goeldorado.com and turned in at the Chamber, located at 111 W. Main Street in El Dorado.

Parade-goers will line up in their cars starting from Highway 167 to Champagnolle Road, then turning right onto 19th Street. After viewing the parade through the fairgrounds, cars will exit on 19th Street, heading towards North West Avenue.

“We are hoping that since the parade will be a drive through event this year, people will bring items for the nonprofits at the entrance of the parade,”said Bill Luther, Chamber president and CEO. “We wanted to come up with an idea to be able to give back, so we are hoping people will participate.”

The Chamber will be accepting Christmas Parade entry forms through tomorrow, Nov. 25, at 4 p.m. Entry forms can be found at the El Dorado-Union County Chamber of Commerce, located at 111 W. Main Street in El Dorado, 870-863-6113 or at goeldorado.com. Email Jaren Books, Chamber Membership & Events Coordinator for more information at [email protected]

Entry fees are as follows:

The judges will be the first to go through the parade, but this year the Chamber is adding another feature allowing parade-goers to vote for their favorite float called People’s Choice. There will be a link posted on the El Dorado-Union County Chamber of Commerce’s Facebook page for people to vote, and also a QR code at the entrance, where voters can find the link to vote.

“We are excited to offer this new feature this year, allowing parade-goers to vote for their favorite float,” Luther said.

The winners of the parade will be announced at the end of the evening.

“We look forward to putting this year’s parade on for the community and hope to have a big turnout,” Luther added.