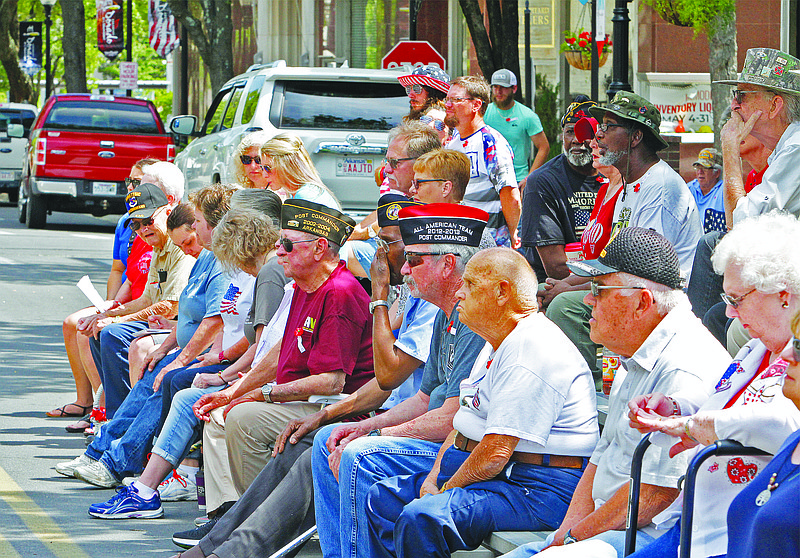 An audience of veterans along with family and friends attend the Veterans of Foreign Wars Memorial Day ceremony at the Union County Courthouse in 2019. (News-Times file)

El Dorado’s American Legion Post 10 will host the annual Veterans Day program this year on November 11 on the west side of the Union County Courthouse.

Post Commander Edgar Brown said that the ceremony will be “pretty close” to previous years and will begin at 11 a.m.

Veterans Day was first established to mark the conclusion of World War I, as major and formal hostilities in that war ended on the 11th hour of the 11th day of the 11th month.

El Dorado’s American Legion alternates control of the ceremony with the local Veterans of Foreign Wars branch each year, with 2020 falling under the Legion’s control.

“[State Senator] Trent Garner will be the speaker and the VFW commander will make remarks as well. We’ll have someone sing the national anthem and we’ll do the pledge of allegiance, do the bell ringing and then at the end a trumpet will play ‘Taps,’” Brown said.

Garner, a veteran himself, previously spoke at a VFW Memorial Day ceremony in May, 2019.

According to the American Legion, bells are used in the ceremony in honor of the celebrations held to mark the end of WW1, also known as Armistice Day. Nov. 11, 2020 will mark 102 years since those celebrations took place.

Brown also said the American Legion will hold a lunch at Post 10 immediately after the ceremony.