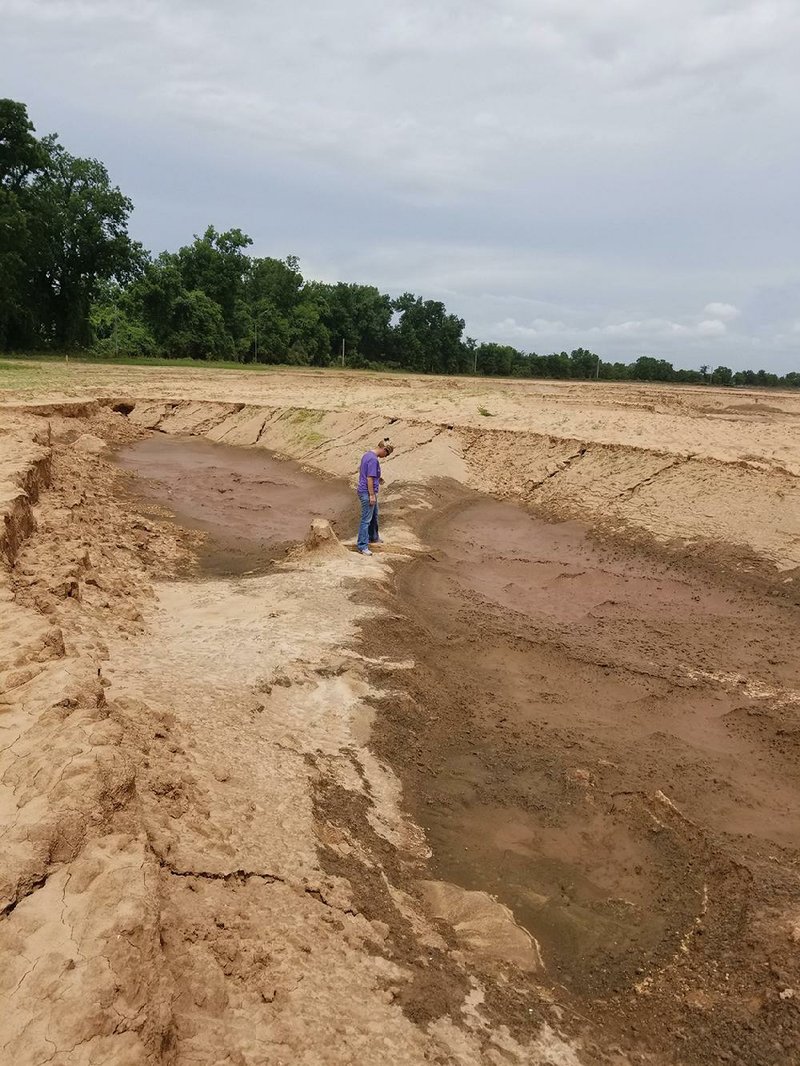 Conway County cattle farmer Tiffany Williams stands in a sand-cov- ered field after the 2019 flooding. She said the sand has created an environment where only weeds can grow easily. (Special to the Democrat-Gazette)

When the Arkansas River flooded last spring, farmers already were wading through economic insecurity caused in part by a federal trade war with China.

Then floodwaters overwhelmed levees, wiped out crops, damaged farm infrastructure and buried grazing land in sand across much of Arkansas, while wreaking billions in farm damage through the nation’s south-central region.

Despite government aid programs such as the Farm Bill and supplemental programs designed to help, many Arkansas farmers are still suffering, agriculture experts and farmers said.

A second year of harsh weather — too wet for some plants, too cold for others — has slowed crop production.

Rates of rice, cotton and soybeans that have been planted are lower than the averages for 2015 to 2019, according to data from the U.S. Department of Agriculture.

Rice generally should be planted by May 15, experts said. Arkansas is the leading U.S. producer of rice.

Vic Ford, associate director of agriculture and natural resources at the University of Arkansas System’s Division of Agriculture, said he couldn’t recall a time with two back-to-back years of such bad weather for farmers.

He said farmers are “way behind” on corn, and that while cotton can be planted, it may not grow well in the cooler weather. If cotton doesn’t grow quickly, he said, farmers have to contend with pests on the crop.

Andrew Grobmyer, executive director of the nonprofit Agricultural Council of Arkansas, said last year’s flooding had a large impact on the rice crop and that economic issues caused by the covid-19 pandemic could negatively affect farmers further.

“It’s really two bad years back to back, and that’s putting a lot of pressure economics-wise on the farming community,” said Ford, who works in the division’s cooperative extension service. “Because you’ve had a bad year, and [it] looks like you are going to have another one.

“The unknown and uncertainty creates a very volatile market.”

Much of the problem comes from mounds of sand the river deposited on cropland, Ford added. Crops can’t grow in sand, and it chokes out grazing grass for livestock such as cattle.

Sand deposits more than a foot deep need to be removed, Ford said.

Tiffany Williams, a cattle farmer in Conway County, said the sand on her fields has created an environment where only weeds can grow easily.

“You’re trying to come back and build another layer of topsoil again,” she said. “We’re doing it however we can.”

Problems at her farm after the flooding included damage to fences, washed-out roads and deep holes in fields created by swirling water. Holes ranged from 20 feet to 200 feet wide, Williams said.

Damage to pastures, which are home to about 500 cattle, is documented in a video Williams created in 2019 to draw attention to the flooding’s effects. Although she’s applied for federal assistance, she hasn’t gotten it yet, she said.

“We can salvage our farm,” she added. “There’s a lot of people who could not salvage their farm.”

The sand has caused problems for farmers around the state, particularly in the River Valley area, Ford said.

County Judge Jim Baker of Faulkner County said acres of agricultural land in his jurisdiction were completely washed out or ruined by sand.

“We are just trying to get some kind of crop planted this year because of it,” he said. “We are now seeing the real effects of the flood.”

Kevin Lawson, Faulkner County extension staff chairman, said the situation was unique because farmers knew the flood was coming and had time to move cattle and equipment to safe areas.

Williams said neighbors on higher ground allowed her and other cattle farmers to keep livestock on their land, resulting in fields that were overcrowded until the animals could be returned.

“There’s been floods over the past five years, but not like this,” she said.

Lawson said producers worked hard to get their fields operational again, but many are still working to get federal assistance.

“There was a lot of sand left behind,” he said. “The sand I witnessed on some acres of land was really deep.”

Other farmers on low plains in east Arkansas are seeing more flooding than a decade ago and haven’t been able to plant this year because of increased rainfall.

Jackie Prince, who owns an 1,800-acre family farm, said his farm has been underwater nearly the whole year. He rotates his crop among soybeans, rice and grain sorghum.

It’ll take at least a week to 10 days for the ground to dry once the water recedes, he said, leaving him little time to plant. June 20 is the last day he thinks he’ll be able to have a chance at planting, and ideally he’d be in the fields planting in April or early May.

“My whole farm is underwater, as we speak, again this year,” Prince said. “We’re rapidly approaching a period of time when it’s too late to plant.”

From 2018 into last year, the land was flooded from November to July, he said. He knows to expect flooding during winter months because of the location of his property, but the past few years have been different.

The deluge is caused by multiple factors, including a halt to dredging of the Cache River, changes to the flow of the river through dams, and other regulatory adjustments.

Last year, when he wasn’t able to plant, he and those who work on his farm picked up jobs such as welding, remodeling houses and helping neighbors on their farms, Prince said.

“It’s just becoming a way of life over here in east Arkansas,” he said of the flooding.

Although he realizes his land is a flood risk, the recent water damage is the worst his family can remember.

“It’s really been frustrating trying to make a living the way we have for generations, but doing it this way,” Prince said.

The effects of two years of bad weather will ripple beyond farmers, Grobmyer said. Other businesses that provide supplies to farmers, sell their crops or use them in products could also be hurt.

The 2019 flooding “was felt not only on the farm but throughout the rural economy. … You have a lot of other businesses that are affected,” he said.

The Division of Agriculture established two programs in March 2019 to address mental health concerns and suicides in rural communities. One, called “Managing Stress and Pursuing Wellness in Times of Tight Margins” or “Farm Stress,” is a one-hour program that offers information about stress management, depression and suicide, according to a news release.

It’s a way to communicate to farmers “you’re not in this alone, and you know that there are folks that can help you during this time,” Ford said.

Statistics from the U.S. Centers for Disease Control and Prevention show that workers in farming, fishing and forestry industries have some of the highest suicide rates of all professions. Increased rates of mental health problems have also been linked to more rural populations.