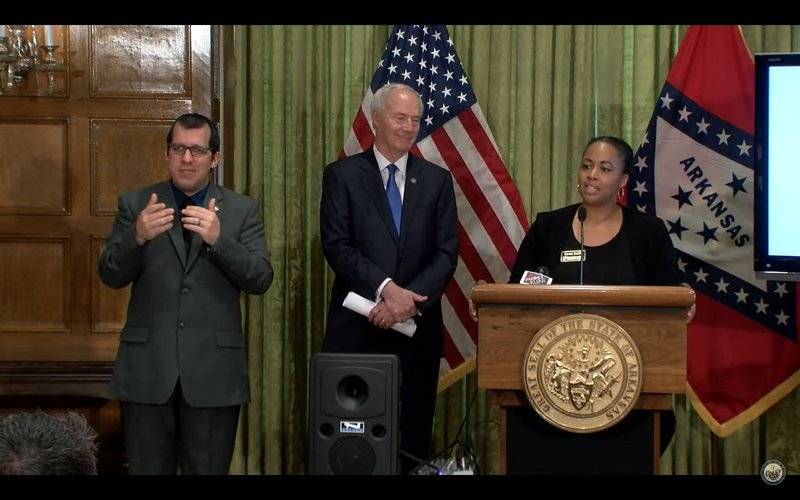 Keesa Smith, Arkansas Department of Human Services deputy director for youth, children and families, joined Gov. Asa Hutchinson Tuesday at his daily press briefing to update the state on how DHS operations are continuing in light of the novel coronavirus (COVID-19) pandemic.

“We too have health care workers that are still ensuring that those in our care at the state hospital, the health center and our human development centers across the state are still getting the care they need and are remaining safe,” Smith said. “Our staff are making sure we’re continuing to provide a safety net for those Arkansans that are most in need and also those that have found themselves in need unexpectedly because of COVID-19.”

Smith said staff in the Division of County Operations are continuing to work both in office and from home. While the department did recently receive permission from the federal government to take SNAP (Supplemental Nutrition Assistance Program) applications over the phone and waive the interview process recipients typically would have to go through, some staff members must continue to make themselves available for those in need that do not have access to a phone and/or internet.

“We have seen a great increase in the number of applications we receive,” Smith said. “Those individuals that are working remotely and at the office are seeing a considerable rise in the work that they do.”

Staff in the Division of Children and Family Services are also continuing to work, Smith said. She said one staff member recently responded in-person to a hotline tip about a 10 year old child who was being physically abused at home; when the staff member asked the child about it, the child disclosed his abuse and has since been placed with family members.

“They (the child’s relatives) have told us that that child would not have disclosed if he was not spoken to face-to-face,” Smith said. “That highlights the fact that there are still activities that have to occur face-to-face, even in light of the things that are happening across the state, and not only are DCFS workers having to do that, but our Adult Protective Service workers are equally going into homes during this pandemic and making sure that those Arkansans that are most vulnerable, our children and our seniors, are being protected from harm.”

Smith said the department recently established a call center in order to check in twice weekly with the 15,000 Arkansans receiving home health care through DHS. She said many of those that receive this form of care do not have a daily in-person check in and that most are homebound.

Soon after the call center was established, one individual reported feeling fine, but told a DHS staff member that they were low on food and had had their electricity cut off. DHS was able to respond immediately, with a staff member local to the person visiting their home and informing their neighbor of the situation. The individual’s children were also informed and pledged to bring their parent food and Entergy was contacted to return the person’s power the same day.

“What made that even more significant was that that individual was on oxygen, and not a portable oxygen machine, but an oxygen machine that had to be plugged in at night,” Smith said. “The neighbor even offered to pull out her extension cord and draw it to the house to make sure that that client got oxygen … Even in the midst of trying times, we still have individuals that are working hard, Arkansans that are caring for other Arkansans and making sure that they are taken care of and we are extremely grateful for all the work that they are doing.”

Another issue facing state residents, especially those in rural areas, is the need for a steady internet connection, particularly for students that are utilizing alternate methods of instruction (AMI) to continue learning at home.

Hutchinson highlighted the state’s recent partnership with the Arkansas Educational Television Network for children from preschool through eighth grade. He said a decision about whether schools will remain closed past April 17 will hopefully come next week.

“Even though they might not have internet, they usually have access to the television, public television,” Hutchinson said. “This is the broadest platform available and it covers that gap Secretary (of Education Johnny) Key recognizes exists in some of our rural areas for internet.”

AETN broadcasts on channel 12 in southeast Arkansas, including El Dorado, and on channel 9 in southwest Arkansas. For the next three weeks, age-specific educational programming will be available at these times:

Many in the state attempting to file for unemployment have faced issues accessing the state’s claim filing system online due to the high volume of claims. Hutchinson said the state commerce department has hired 20 to 30 new staff members to field calls from their new unemployment hotline and has invested in new information technology (IT) systems to try to adjust their systems to meet the state’s current need.

A reporter in attendance said he has heard reports of the hotline shutting down at 3 p.m. and filers being redirected to visit in-person to file, which is not currently possible due to the COVID-19 pandemic.

“I know that they’ve tried to make sure that the website and the in-person opportunity is effective, even though we’re trying to reduce those that go to the office,” Hutchinson said. “We’ve had tens of thousands that have gotten through and filled out claims. I know it’s frustrating, but they’re working on it every day. We’re going to improve the system. It’s a challenge.”

Hutchinson said 27,250 unemployment claims had been processed by last Friday. He said updated unemployment numbers will be released toward the end of the week. The statistics don’t currently account for those who have become unemployed that have not been able to file claims or whose claims are waiting on processing.

Hutchinson said the state has also received 275 applications from small businesses seeking bridge loans, most of which have been in the smaller loan category, which are funded through the Economic Development Commission, which he said will be processed and provided by next week.

At the request of several industries the governor also announced he signed an executive order yesterday suspending in-person Notary services and providing for audio or visual notary services.

“This is for limited use by attorneys, notaries for title companies and those supervised by them or banks,” Hutchinson said. “This will allow those that need a will they haven’t been prepared for to be able to get it done even though they might be in isolation or they might not be able to, because of limitations on person-to-person contact, be able to actually execute the will or to get some transfer of property actually executed.”

Hutchinson announced he has also submitted a request to the Federal Emergency Management Agency (FEMA) to declare Arkansas a Major Disaster State due to the COVID-19 pandemic, which he said would allow the state to be reimbursed for National Guard expenses.

“We are in the process of planning to build our surge capacity for hospitalized patients. We have the National Guard assisting us with that. Their planners are working together with our staff and other partners to come up with a plan to increase hospital beds beyond what we have now to accommodate additional patients if we need those,” Secretary of Health Dr. Nate Smith said.

Hutchinson said he has authorized 40 additional National Guard personnel members to assist with the planning effort. He said his letter to FEMA included information about what National Guard resources have been put in place here, what the pandemic has cost the state and the number of cases in the state.

“That gives us access to, for example, federal funding for this disaster. The most clear example is our National Guard resources; right now, when I allocate 40 more National Guard personnel, that’s on the state’s dime,” Hutchinson said. “We’ve worked with FEMA as they review it. I expect a very quick turnaround.”

Because of guidance to cancel voluntary medical procedures during the ongoing pandemic, some health care professionals, including some at the Arkansas Heart Hospital, have been laid off or furloughed. Hutchinson said those employees are entitled to unemployment benefits, including federal funds provided through the CARES (Coronavirus Aid, Relief and Economic Security) Act whenever those become available.

Smith said the state is still dealing with a shortage of the chemical reagents needed to process COVID-19 tests, as are many other states across the country due to a national shortage of those supplies. However, he said the state’s testing capacity has increased measurably from where it was several weeks ago.

He also noted that total numbers of cases could be skewed by the amount of tests being performed in nursing homes; but said it is important those at high-risk, such as nursing home residents at facilities that have had confirmed cases, are tested to ensure the outbreak is not unmanaged within the facilities.

The state is still expecting a shipment of personal protective equipment (PPE), such as masks, gloves and gowns, to arrive this week.

“I think we’re doing a better job in general of getting PPE out. We’re still getting reports of facilities that don’t have access to PPE, but we’ve got personal protective equipment from the National Strategic Stockpile that’s going out,” Smith said. “I don’t think anyone has all that they anticipate they will need, but we’re trying to get that out there. The highest risk settings for health care workers tends to be when a patient comes in and they don’t initially suspect COVID-19 and then there are many people that are exposed before people think to put on the personal protective equipment.”