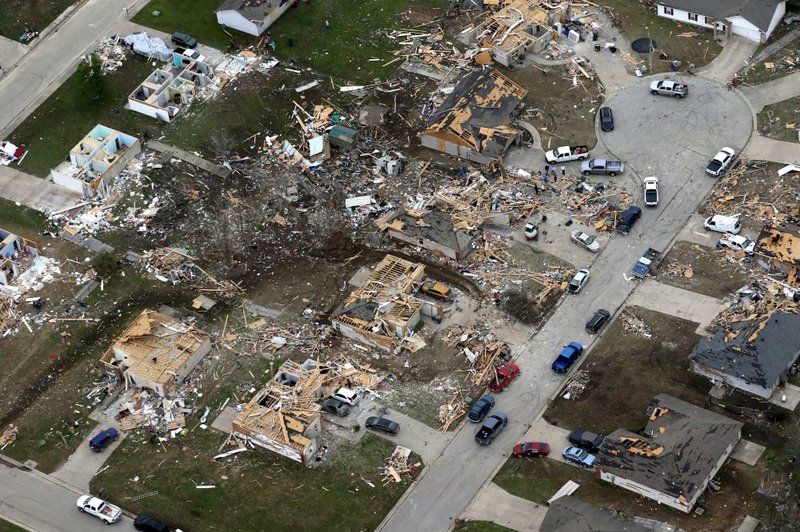 JONESBORO -- Graeme Bell got word Saturday that his factory was on fire, so he rushed over in his SUV and saw firefighters unfurling a hose.

Moments later, he noticed most of Camfil's north bay building -- where all the steel-cutting and welding takes place -- was missing, like it had been destroyed in a bomb blast.

It wasn't a fire or a bomb that ravaged the air-filter factory. The culprit was a tornado, one that packed winds of up to 165 mph and made its presence known in Jonesboro while the northeast Arkansas city, like the rest of the country, dealt with the throes of a virus outbreak.

"It just shows you what nature can do," said the England-born Bell, who had never before lived through a twister. "I mean, how can a tornado do that to a factory? It was like something out of a movie. Not only that, but it happened in the middle of a pandemic."

Saturday's tornado shredded the building, suctioned the debris and dumped it near a runway at the Jonesboro Municipal Airport. And it wrecked much more than a single factory. The storm hardly spared anything with a roof that was in its path, whether a large retailer or a one-story home with vinyl siding.

A sense of relief remained about town on Monday because no lives were lost in a storm that caused immense property damage.

In all, 22 people were injured from the tornado and at least 458 homes were damaged, including 149 that were mostly or completely destroyed, said Marvin Day, the county judge of Craighead County, who read the most up-to-date statistics from the American Red Cross during a news conference Monday at City Hall after the second full day of cleanup.

The Northeast Arkansas Chapter of the American Red Cross had only surveyed 80% of the reported damage by Monday afternoon, so its numbers are expected to increase today, Day said.

The 22 injuries, which weren't life-threatening, and zero deaths are numbers that local officials have attributed to the business closings and social distancing during the covid-19 outbreak. Several of those affected by the tornado echoed the same sentiment.

No one was injured when the Camfil factory was destroyed, for instance, because the employees weren't there, Bell said. That wouldn't have been the case during a typical Saturday.

"We would've definitely had casualties had it been a normal day," Bell said. The fire, he added, turned out to be an afterthought. It was coming out of a gas pipe, but nothing was around it that could catch fire. It was all ripped away by the tornado, he said. The firefighters handled it easily.

The Mall at Turtle Creek and the retailers across the street along East Highland Drive also were directly hit by the EF3-rated tornado. An EF5 tornado, which has winds exceeding 200 mph, is the strongest.

Craighead County Sheriff Marty Boyd said the intersection of East Highland and Red Wolf Boulevard, where the mall is located, is "without a doubt" one of the busiest parts of the city, which has a population of more than 75,000.

Businesses closing and people choosing to stay home spared a "multitude of lives," he said.

Retail property was not spared.

[Video not showing up above? Click here to watch » https://www.youtube.com/watch?v=iWqaWMyIwD0]

Cleanup crews were on hand Monday removing debris, and security units were watching the stores that had full inventories. Several fully stocked stores still had gaping holes where windows and glass doors had previously been.

While much of what was left on the ground had been cleared away, tons of debris remained 48 hours after the storm.

Insulation was still tangled in trees, large branches were strewn on top of a gas station canopy, and twisted metal still dangled across storefronts.

"We've made huge strides in cleaning up," Boyd said. "Due to the good weather, we got a lot accomplished today. We're trying to use every ounce of daylight to get everything done."

Star Transportation, a Jonesboro-based petroleum-hauling business, had its accounting office destroyed by the tornado. Three employees were inside another building on the East Highland property, owner Al Heringer said, including one disabled man who was in a wheelchair.

Heringer said he started driving toward the business after he heard that a tornado had ripped through the area. While en route, he got a call from one of his employees, who told him, "The front building is gone!"

Heringer said he feared the worst but felt a sense of calm when he arrived, in spite of seeing about 20% of the building he owned still standing.

"The good Lord blessed us," he said Monday while a crew was going through the debris to see what could be salvaged. "We'll be operational again soon, and that's because of the man up above."

Burt Barrett was one of the many employees of Marck Industries, a recycling company, who were called to the East Highland location to remove some of the metal debris. He said his 18-year-old daughter was working inside the nearby Chicken Salad Chick restaurant when the tornado touched down. It flung her Fiat into another building, tossing it like a softball.

She and her co-workers ran and hid inside a bathroom until the storm passed. Barrett said it was a frightening experience for his daughter and one that could have been worse for many more people had the spread of the covid-19 virus not restricted restaurants to curbside- and delivery-only status.

"She's still a little shaken up, like a lot of us are," Barrett said. "It's miraculous that everyone walked away from it OK."

The apocalyptic scene at Camfil was something Bell never imagined he would ever witness. Tornadoes aren't a threat in the United Kingdom, where he is from and has lived most of his life. Bell is a vice president of the Sweden-based air-filter manufacturer. He is in charge of the Jonesboro facility and oversees all of the company's operations in North and South America. Camfil produces $75 million worth of air-filtering equipment per year, he said.

The company has had to handle s

lowed deliveries, all while having employees work from home. Now, the company is going to have to deal with a temporary move as well as a rebuild of its Jonesboro facility, he said.

The company already was looking to build a new facility locally. The tornado might "accelerate the plan," Bell said.

"We came out lucky," he continued. "Our No. 1 priority is people, not money."

The damage in Jonesboro didn't cause much of a disruption on the government side.

He said local officials had already consulted with state election officials and that a decision was made to "consolidate" the precincts and have two polling places. It was decided then that "we were still on the front side of the pandemic," so an election needed to happen as early as possible, Holliday said. The tornado didn't change that.

It is another example of business as usual in Jonesboro in spite of circumstances that are as unforeseen as they are difficult, said Mayor Harold Perrin, who addressed the media alongside Day on Monday.

Among those whose homes were damaged Saturday were three firefighters. Perrin pointed out that "our family was hit as well as others" and that the level of assistance from neighboring areas and the surge of volunteerism in the wake of the storm have been "absolutely incredible." 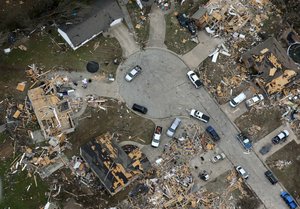 Photo by Thomas Metthe
A residential area devastated by the tornado is seen Monday in Jonesboro. (Arkansas Democrat-Gazette/Thomas Metthe) 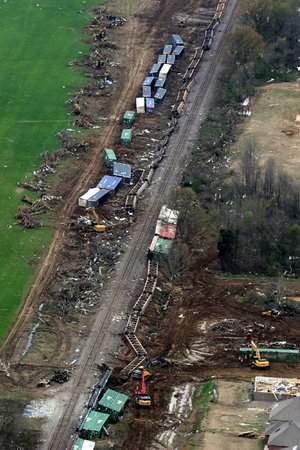 Photo by Thomas Metthe
Union Pacific crews work Monday at the site where the tornado knocked over train cars as it made its way through Jonesboro. (Arkansas Democrat-Gazette/Thomas Metthe)