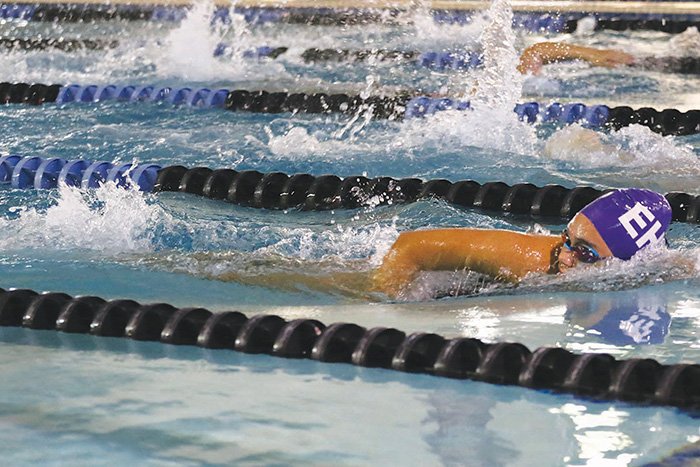 Siandhara Bonnet/News-Times El Dorado's Adrianna Arnold takes a breath during the girls 200-yard freestyle at the Wildcat Invitational. Arnold enjoyed an outstanding freshman season, earning All-State honors. She finished second in the 500 freestyle and third in the 200 freestyle at the state meet.

It was a banner year for El Dorado swimming under first-year coach Courtney McDiarmid Canady. No one made a bigger splash than freshman Adrianna Arnold, who earned All-State honors.

Arnold is the first freshman from El Dorado to earn All-State since current University of Kentucky swimmer Izzy Gati.

“I think she had an outstanding performance as a freshman,” Canady said of Arnold. “That’s a big accomplishment to be able to get All-State and All-Conference in her swims.”

Arnold finished second in the 5A State Swimming & Diving Championships in the 500 freestyle and third in the 200 freestyle.

She was second in the 500 freestyle in the conference meet and was also runner-up in the 100 butterfly.

The 500 freestyle is a difficult event but is where Arnold could thrive in the future.

The Lady Wildcats finished seventh in the state meet. Arnold was also a member of the third place 200 medley relay along with Rachel Murphree, Abigail Thompson and Jana Powell.

“She has quite a few years of swimming under her belt. I know she’s been swimming for Farrin (Cain at HealthWorks Fitness) for some time now. Doing that really helped her when she came in for high school swims. Even though this was her first year, her background was swimming. That did a lot for her,” said Canady, who noted she didn’t have a swimmer on the El Dorado girls’ roster this year.

“I think we’ve definitely got a lot of room for improvement. Everyone does. I feel like she’s definitely got a lot of potential. We don’t have any girls that are graduating. We’ll be able to keep all of our girls, which I’m excited about. They all performed pretty well at state so it’s exciting to be able to see the same ones go back next year and we’ll be able to work on some things we weren’t able to get to this year.”