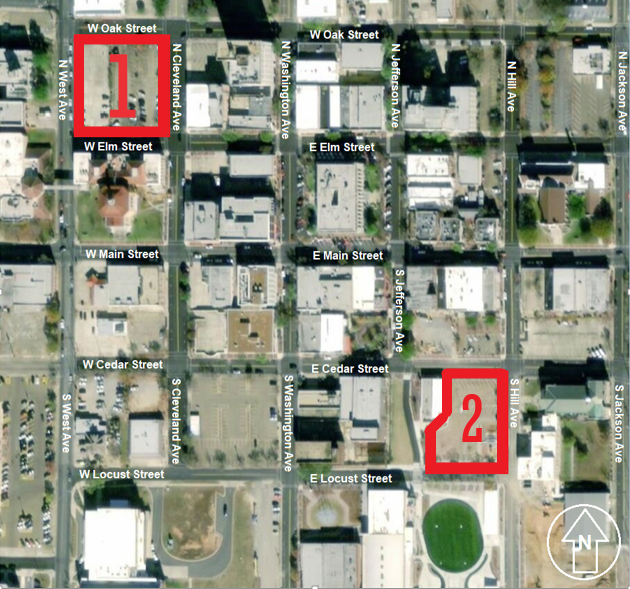 The two free public parking lots downtown. - Photo by Courtesy of the Chamber of Commerce

A meeting to discuss downtown parking enforcement got off to an explosive start Friday with a downtown developer and property and business owner leaving under the threat of arrest just minutes after the meeting began.

A lengthy discussion that followed the incident also resulted in two Union County officials and a county department head giving up their designated parking spaces at the Union County Courthouse.

A task force that was assembled in 2019 by Mayor Veronica Smith-Creer met Friday in an ongoing effort to address parking issues that have cropped up in the absence of a downtown parking enforcement officer.

At the start of the meeting, Smith-Creer announced that comments from the audience, which contained several downtown merchants and property owners, would not be allowed.

The mayor later explained that the groups had received an email informing them of the meeting and encouraging them to attend and express their concerns.

Smith-Creer explained that Richard Mason, El Dorado downtown developer and property and business owner, sent out the email and that she was one of the recipients.

In response to an email inquiry from a News-Times reporter, Mason said he had requested to speak during the meeting and that his request had been granted by the mayor.

However, Smith-Creer said that in her reply to Mason’s email to downtown merchants, she informed him that public comments would not be allowed during the meeting.

After the mayor made an announcement to that effect at the start of the task force meeting Friday, Mason, who has called on the city to hire a downtown parking enforcement officer, stepped to the lectern and began to speak.

He told Smith-Creer that downtown was in a “crisis” and he accused her of “ruining downtown” due to the lack of enforcement of parking ordinances downtown, including the controlled parking zone and other violations, including blocking alleyways.

The mayor again told Mason that he was not allowed to speak but that he was welcome to sit in on the meeting.

Mason refused to sit and voiced his objections to the banning of public comments from the audience. During a brief exchange, Smith-Creer sternly told Mason that he “was not going to bully” her.

When Mason asked Smith-Creer if she was going to have him arrested, Police Chief Kenneth Hickman, who is part of the task force, stepped in and asked Mason to sit down, warning him that he would be removed from the Council Chamber of City Hall for disorderly conduct.

“I will not sit down and I will not be quiet!” Mason responded.

At that point, a group of audience members, including a few downtown business owners and Mason’s wife, Vertis, began filing out of the council chamber.

Moments later, Richard Mason followed suit, leaving City Hall prior to the arrival of the officers who were called in by Hickman.

Mason later contended that Smith-Creer stifled his First Amendment rights by not allowing him to speak during the meeting.

In an email to the News-Times, he wrote, “She is ignoring hundreds of infractions a day and our downtown is suffering.”

“She fired the parking attendant a year ago and retail and restaurant sales have dropped significantly. Of course it’s the mayor’s fault and she didn’t want to hear that,” Mason continued.

The former downtown parking enforcement officer was terminated from the position in January 2019.

“She was just not working in the best interest of this city or City Hall.” Smith-Creer said during a meeting in March of 2019. “We were getting complaints about her, not just about downtown parking but also with a lot of odds and ends around City Hall.”

On Friday, Smith-Creer clarified statements she said she has heard regarding the matter, saying, “I did not fire her.”

Robert Edmonds, director of public works, under which the parking enforcement officer’s position fell, dealt with the termination, saying Friday, “It wasn’t just downtown parking. There were a multitude of things associated with that.”

The mayor also addressed other rumors regarding the situation.

She later apologized for how the meeting began and task force member Kelli Harrison said she would take responsibility for the confusion surrounding the situation, saying that she thought she could invite other downtown business owners to share ideas and concerns during the meeting.

As the discussion progressed, task force members revisited possible solutions that had previously been discussed, including installing parking meters and implementing a mobile app that would take care of paid parking.

Downtown merchants and groups have complained that employees and owners of downtown businesses and offices have been taking advantage of the lack of enforcement of a city ordinance that sets a three-hour parking limit during designated days and hours in a controlled zone within the Union Square District.

Groups, including the Downtown Business Association, Main Street El Dorado and the Murphy Arts District, have said that downtown employees and business owners are shutting customers and other downtown visitors out of prime parking spaces by occupying the spaces throughout the day.

A three-hour parking limit is set for the controlled zone from 9 a.m. until 5 p.m., Monday — Friday, with the exception of legal holidays.

Another idea that was bandied about Friday was to copy the layout of the downtown area in Magnolia by creating one-way streets, eliminating some parallel parking spaces and turning them into angled parking spaces.

Task force members also revisited the idea of placing stickers or decals on the vehicles of downtown employees and business owners as an identification marker and offering incentives, such as cash prizes or gift cards, to those who park outside the controlled parking zone, which includes:

• Both sides of Washington between Oak and Cedar.

• Both sides of Jefferson between Oak and Cedar.

• Both sides of Elm between Cleveland and Hill.

• Both sides of Main between Cleveland and Hill.

• Both sides of Hill between Cedar and Elm.

• Both sides of Cedar between Cleveland and Hill.

• The south side of Main between Hill and Jackson.

• The south side of Main between Cleveland and South West Avenue.

Members of the task force also pointed out that those who violate the parking ordinance also work in downtown offices, including the Union County Courthouse.

County Judge Mike Loftin said he has sent memos to courthouse employees about the matter to little avail.

“Courthouse employees are a big part of the problem. I’ve sent memo after memo. There’s nothing I can do. Outside those walls, it’s the city’s (jurisdiction). I can’t enforce it,” Loftin said.

He also said he previously rented parking spaces for courthouse employees in a formerly paid parking lot that is owned by the city just north of First Baptist Church, 200 W. Main.

The city now offers free parking in the lot as part of a measure to encourage downtown workers to park outside the controlled parking zone.

Free parking is also available in a city-owned lot across from the Murphy Arts District Amphitheater.

Smith-Creer said shuttle service is available to ferry people to and from the city-owned lots to businesses and offices downtown. She said arrangements for the service must be made in advance by calling her office at 870-862-7911.

Loftin noted that an upcoming trial is expected to bring scores of people to the Union County Courthouse for several weeks, adding that the shuttle service could come in handy then.

“We get courthouse employees who come in every day for breakfast and lunch at the store but there’s a ton of other people who can’t get down there to eat,” said Harrison, owner of Olde Towne Store across from the courthouse on Jefferson Avenue.

In an unexpected move, Loftin volunteered to give up his designated parking space at the courthouse.

Not long after the meeting, city crews removed signs that had designated parking spaces for the judge, county coroner and county maintenance workers.

The spaces are now open to the public. Loftin said he will park in the city-owned lot behind First Baptist Church.

“I hope it’s a case of leading by example,” he said.

Smith-Creer maintained there is plenty of available parking downtown.

“It’s may not be where you want it. You just have to walk,” she said.

Downtown churches and businesses, including HealthWorks Fitness Center, that are outside the controlled parking zone have said their parking lots are available to downtown visitors.

“Yesterday, I used (the First Presbyterian Church’s) parking lot and only three people were parked there,” Harrison said.

Smith-Creer has said hiring another downtown parking enforcement officer would not be cost-effective for the city.

Holding up a thick stack of unpaid parking tickets, she said the presence of the parking enforcement officer seemed to do little curb parking violations downtown.

Hickman said the police department does not have the manpower for such an assignment.

“I’m very compassionate about Mr. Mason’s perspective but I can’t tell him that I can put an officer down there because our resources are taxed,” the police chief said.

He said he has also received inquiries about an off-duty officer working downtown, similar to security work that officers take at local businesses, such as grocery stores and Stars Cinema.

Hickman and Smith-Creer referred to a common complaint that has arisen over the years with various downtown parking attendants, saying that people have contended that parking ordinances are not enforced fairly.

“That’s what you would get with an officer down there. It’s still a person. Some officers are more compassionate than others and some officers stick to the letter of the law,” he said.

He urged downtown merchants, employees and visitors to call the police department’s non-emergency number, 870-863-4141, if they spot a vehicle parked illegally downtown.

City Code Enforcement Officer Kirby Craig inquired about the legality of placing stickers/decals on the vehicles of downtown employees and Hickman said the businesses could make such a request.

“Most of you know the employees and the employers’ cars that are doing this,” Smith-Creer said.

“It would be an outward visual for everyone. It’s a little more shaming,” said Pitard.

Harrison suggested that the task force seek feedback from downtown business owners about the idea.

“Even with that, it still comes back to the fact there’s still parking downtown. People are saying that I’m being petty and I’m destroying downtown but I shop downtown. I eat downtown. I’m probably downtown more than the average customer,” Smith-Creer said.

She referred to recent social media posts about the issue, saying, “People can’t see is fighting and bickering about this. That’s not promoting a healthy downtown. Why would they want to come downtown if they’re seeing us fighting about this?”