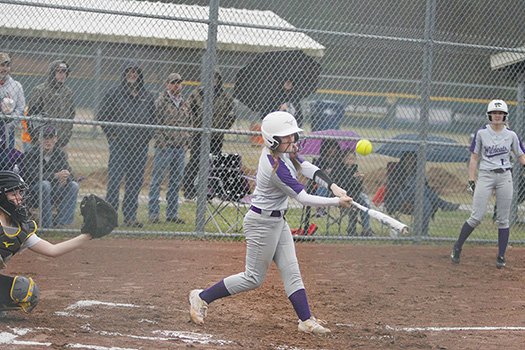 Terrance Armstard/News-Times In this file photo, El Dorado's Makaylen Swint swings at a pitch during a game against Harmony Grove during a game in the 2019 season. El Dorado will host the Lady Cat Classic starting today at the El Dorado-Union County Recreation Complex.

With conference play looming on the horizon for many schools, the Lady Cat Classic will serve as a final opportunity for coaches to get their personnel and lineups aligned for league competition.

The two-day event gets underway today at the El Dorado-Union County Recreation Complex with the field having a local fervor with Junction City and Smackover joining El Dorado as teams from Union County in the tournament.

“Most of them are within our region,” said El Dorado coach Chris Ezell. “We pretty much get most of the local teams in our area. They come together and compete early on in the season and try to get some games in across different classification levels that you might not get to during the regular season.”

Having the chance to play several games over two days will give coaches the opportunity to experiment with their lineups and see where players could potentially fit should a need arise later on in the season.

“I think it’s great that all of our local teams in the area can come together and play without traveling that far and get a lot of competitive games in,” Ezell said.

“I think that’s the biggest thing, and with it being early in the season, it gives you a chance to play multiple games in a short amount of time, move kids around and maybe give people opportunities to play, move your lineup around early on before those conference games hit to give you a chance to get your team lined out for the season.”

Pending Thursday’s game at Harmony Grove, the Lady Wildcats sported a 1-2 record, but Ezell said his young team has been improving with every outing.

“Inexperience shows on the field, and that’s one thing we’ve been working on diligently over the last couple of weeks of practice is just cutting down the mental mistakes,” Ezell said.

“A lot of that is from inexperience. These kids haven’t been on the field together that much, and with the weather, I think we’ve literally had about three practices on our own field throughout January and February. That’s how bad it’s been wet.

“We’re having to learn on the fly and how to play together as a team. Those things are getting better. With each game, we’ve seen improvement. That’s all you can ask as a coaching staff. We’ve still got a ways to go to really get to where we want to be.”