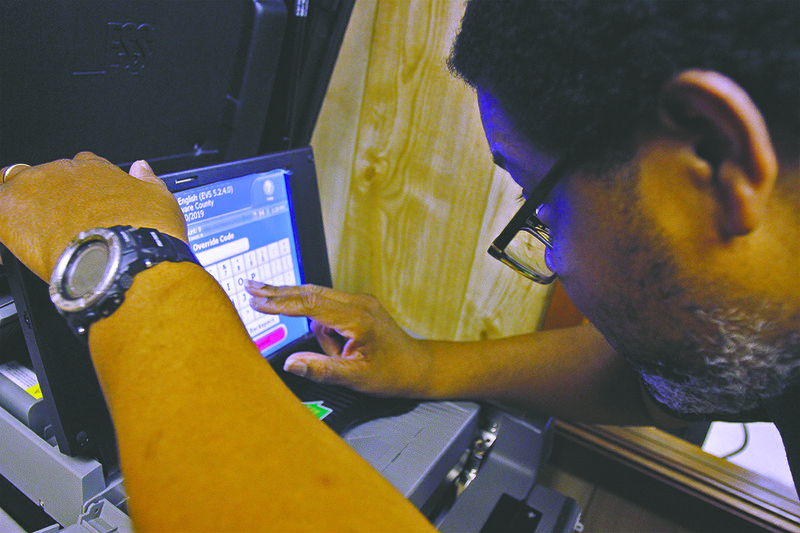 The county received new election equipment, including 54 voting machines and 20 tabulators, last February from the Arkansas Secretary of State's office with no bill for local taxpayers; however, County Clerk Shannon Phillips said last Thursday that the county is down one vote tabulator from what will be needed for March 3's primary election.

"When we were given new voting equipment, they gave us 20 of the DS-200s, which is the vote tabulating device; we actually needed 21," she said. "I don't know what happened there."

Phillips said a quote for a new tabulator valued it at just under $5,000.

Additionally, she said, while the ballots for the new machines can be made by and purchased from the state, it would be more cost-effective for the county to purchase a special ballot printer made for the new voting suite.

Correct ballots will be especially important with the Quorum Court's recent decision to switch from a precinct-based election system to a voting center election system, which allows any voter, no matter where they reside, to vote at any polling place, meaning that each polling site will need to have every variation of the ballot for both March's primaries and November's general election available for voters.

"For us to purchase and have on stock, just in case we need them, would be extremely expensive going forward," Phillips said. "I spoke with other county clerks and it was suggested to me that we purchase a special printer that would allow us to print our ballots as we needed them, which would save us a tremendous amount of money. … That is another $4,000, but over time, it's going to save us way more than $4,000. The supplies for our new voting equipment are expensive."

"Nothing has been purchased to catch any of the ballots," Phillips said.

"I would think that would be a confidentiality concern," Harrison said.

"And a transport concern as well," Phillips added. "There's got to be some way for the poll worker to bring those in on election night; they can't sit out there. We're trying to eliminate as much possibility for error as we can … there's some things we need to look at and some adjustments, and I do think we need to purchase those two items."

Phillips previously told Quorum Court members that she suspected a new tabulator would be necessary going into the 2020 election cycle. The county received 20 tabulators from the state originally; however between 19 polling places, plus one each for early votes and absentee votes, it was one too few.

Phillips asked the Quorum Court to appropriate additional funds into the Union County Election Commission's 2020 budget from the county general fund for the new equipment Thursday. Her request was unanimously approved and will be codified at next month's meeting.

Dr. Kermit Parks, chairman of the Election Commission, was in attendance Thursday. He said his fellow commissioner Janelle Williams is working to organize and train poll workers between now and primary elections on March 3.

The Election Commission will hold poll worker training sessions on Jan. 30 and Feb. 6 at Simmons Bank at 100 W. Grove St.; poll workers can be paid $25 for training and $100 for working on Election Day. To learn more, contact Williams at 870-814-6057 or [email protected]