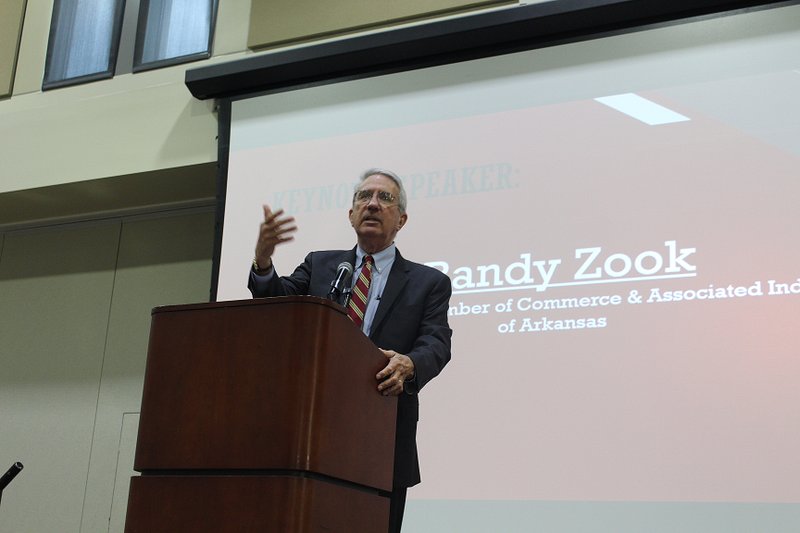 The El Dorado-Union County Chamber of Commerce’s second Economic Outlook Luncheon of the year was held yesterday, with Randy Zook, president and chief executive of the Arkansas State Chamber of Commerce and the Associated Industries of Arkansas, giving the keynote address.

Zook said the economic outlook for El Dorado, Union County and the rest of Arkansas is looking up after the most recent session of the Arkansas Legislature, where Gov. Asa Hutchinson’s four T’s – teachers, taxes, transformation and transportation – were a major focus.

“As you know, the governor described it as the ‘Four T’s session’ – teachers, taxes, transformation and transportation – so let me touch on each of those, because at the end of the day, an organization like this, and our organization as well (Chambers of Commerce) – we’re all focused on one thing: the Holy Grail is economic growth,” Zook said. “How do we make the economy in Arkansas and south Arkansas grow faster so that it generates more opportunities for our children and grandchildren and generates better earning opportunities and allows people to enjoy a higher standard of living and have lives that are more filled with choices and opportunities and not just dead-ends and limitations? That’s what we’re all trying to do.”

In February, Hutchinson signed a bill raising the minimum salary for Arkansas teachers to one of the highest among surrounding states. The bill will raise teacher pay by $4,000 over the next four years to eventually reach a starting salary of $36,000 for those with the least experience.

“That’s a very positive step,” he said. “There are still districts where starting pay is right at the $30,000 level, and the governor’s wanting to get that up to about $36,000 as a base and then allow teachers to go on to make more. That’s money well spent, I think, in my view. It certainly increases the likelihood that we’ll attract enough good people into the teaching profession to be able to sustain and improve, celebrate improvement, in our public school system.”

Public school teachers around the country spent much of the last year agitating for higher wages. In neighboring Oklahoma, a state-wide strike halted school for ten days before officials agreed to raise the minimum salary for teachers by $6,000 and for support staff by $1,250, as well as increasing funding for public schools.

Earlier this year, Hutchinson began what he calls the ‘5.9 Tax Plan,’ where the top earners in Arkansas, as well as large corporations (C Corps in the tax code, Zook said) will have their taxes lowered to 5.9% within the next few years.

“Those two tax rate reductions will save Arkansas businesses somewhere in the neighborhood of a total of $125 million a year in their tax bill,” Zook said.

He also noted that the ‘net operating loss carry forward’ rule also changed, allowing businesses to carry losses forward 10 years rather than the five years they were previously allowed. The 10-year carry forward will be in full effect in 2021.

“That operating loss carry forward – we were one of the two worst states in the country, prior to this legislative session,” Zook said. “We didn’t go all the way as far as we wanted to go, which would have been about 20 years, which is what most states have, so we’ve taken a big bite of that apple and I think in subsequent years, we’ll be able to come back and move that even further.”

Zook said the extension of the loss carry forward could help in a potential economic slow-down or recession.

“With a looming probable slow-down, or even recession, in the next two or three or four years, we’ll be in a better position to weather that challenge,” he said.

One of Hutchinson’s primary goals when he took the office of governor was to re-organize the state government by eliminating redundancy and streamlining the bureaucracy.

Last year, he announced his intention to reduce the number of cabinet-level agencies reporting to him from 42 to 15, and in April, he signed the Transformation and Efficiencies Act of 2019 into law.

“All of the K-12 supervision and oversight that the state does is now done under one set of administrators in the Department of Education. Up until now, we’ve had Career Ed separated from the Dept. of Education, so superintendents, principals were really kind of serving two masters and it was confusing in some cases, frustrating in lots of other cases,” he said. “I think we’re going to see much more focus, much more appropriate steps taken, especially around the Career and Technical Ed, because we’ll have better focus and likely better funding.”

The change has allowed the Arkansas Chamber of Commerce to expand their Be Pro Be Proud Mobile Workshop, which provides education on industrial and technical employment opportunities available within the state, Zook said. The Mobile Workshop is a traveling trailer with industrial-job simulators inside.

“I’ve got to tell you – it’s Disneyland for adults,” he said. “It’s a whole lot of fun to get on a simulator for a John Deere excavator and just tear the heck out of the landscape – but it’s all virtual so there’s no lasting damage. We put the governor on it last Thursday and I thought we might have to pry his cold hands off of it.”

The governor has also made expanding and improving the state’s highway system a priority.

Zook said that Arkansans are responsible for 16,500 miles of state highway, making it a large expense for the approximately 3 million taxpayers in the state. A half-cent sales tax was imposed in 2012 to fund highway maintenance and improvement and is set to sunset at the start of 2023; Zook said a ballot initiative next year will allow Arkansas residents to choose to either kill the tax or make it permanent.

“It’s worth the investment. It’s worth the very modest individual cost to make that a permanent cost to fund a robust highway program,” Zook said.

According to the Federal Highway Administration, industries in the United States realize savings when money is invested in the road system and highway capital investments contribute to productivity growth.

Under Hutchinson’s leadership, the economic outlook for businesses and corporations has improved and will likely continue to thanks to continuing tax cuts, business-friendly legislation and the improvement of our state transportation system; however, Zook said we can go even further to make Arkansas an appealing location for new businesses.

“We have made enormous progress in the last several legislative sessions on issues relative to the competitiveness of our business climate, but we have a long way to go. We have opportunities that abound in terms of taxes, in terms of regulatory matters,” Zook said. “We can do a lot better to make ourselves more compelling, more attractive.”