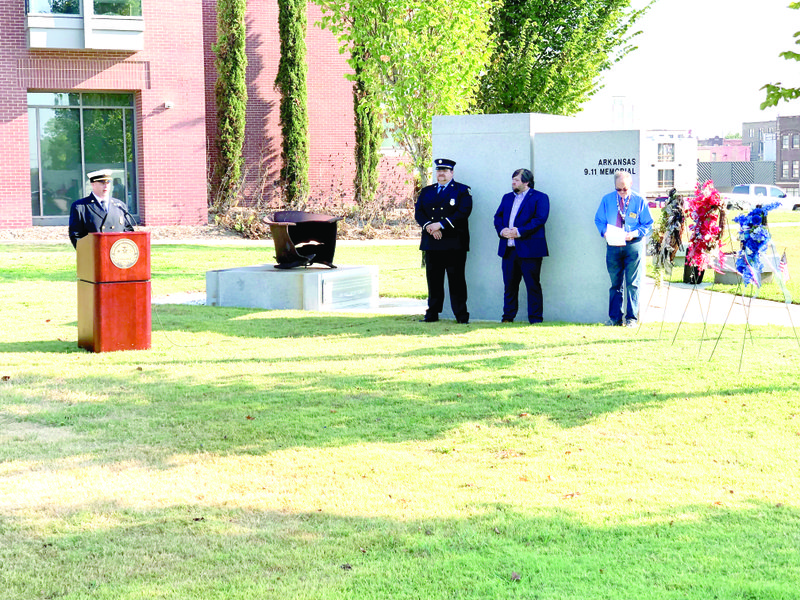 Community members gathered at the Arkansas 9/11 Memorial in El Dorado on Wednesday to honor those who died in the attacks.

Community members and local firefighters gathered at the Arkansas 9/11 Memorial, located south of the El Dorado Conference Center, Wednesday morning to honor the Americans who lost their lives in the Sept. 11, 2001 terrorist attacks, particularly four Arkansans.

Assistant Fire Chief Seth Rainwater delivered a speech that focused on how best to remember the almost 3,000 Americans who died as a result of the attacks.

“On that day, our nation saw evil, the very worst of human nature, and we responded with the best of America,” he said. “With the daring of our rescue workers, with the caring for our strangers and neighbors who came to give blood and help in any way they could. After Sept. 11, 2001, our country saw a revitalization in patriotism that had not been seen in decades.”

Rainwater noted that the best way to keep alive the spirit of those who died is to remember their lives and their service, adding simply posting on social media isn’t enough.

“We do that by living our lives unafraid of what terrorists might do,” he said. “We do that by remembering the sacrifices of those who rushed in and gave their lives for their neighbors. We honor them just for doing their jobs. We do that by thanking our military and our first responders for continuing to be willing to sacrifice themselves for mankind.”

Firefighter Justin Tolin read the names of those who died. Four Arkansans died in the Sept. 11 attacks, and their names are engraved on the inside of the Arkansas 9-11 Memorial: Sara Elizabeth Low, Malissa White-Higgins, Nehamon Lyons IV and Thomas E. Burnett, Jr. Minister Cliff Preston closed the ceremony with a prayer.

The monument area of the memorial is divided into four zones: the first features a piece of steel recovered from 1 World Trade Center resting on a granite pedestal, part of which reads “We Will Never Forget.” The second section is enclosed and is dedicated to the four Arkansans who were killed, and includes their name and hometowns. The granite floor features a storyboard with text, quotes and a timeline of the Sept. 11 attacks. A solitary flagpole is at the opposite end of the monument from the piece of steel.