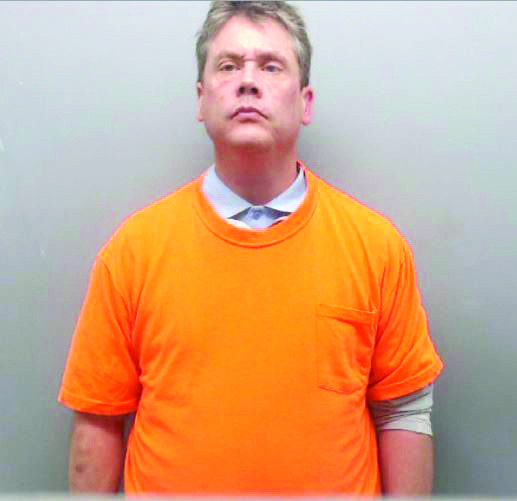 Michael R. Cooper, 48, of El Dorado is in the Union County jail on felony charges of possession of methamphetamine and possession of drug paraphernalia.

Cooper was originally arrested on Oct. 6 on charges of third-degree domestic battery, resisting arrest and possession of the instruments of a crime. According to a Union County Sheriff’s Office report, that night, a woman contacted UCSO to report him “running around the golf course naked and tackling” her in an attempt to strangle her. Cooper lives near Mystic Creek Golf Club.

The woman reported trying to calm him down before eventually being tackled and choked by him until she “submitted,” at which point he let her go, the UCSO report says. Sheriff’s deputies arrived shortly after that.

Deputies attempted to detain Cooper in order to allow ProMed emergency medical technicians to check on his medical condition. He resisted detainment and medical care, but after turning himself upside down in a deputy’s police cruiser, was loaded into a ProMed Ambulance and transported to the Medical Center of South Arkansas, according to the police report.

Cooper was arrested again on Oct. 11 after failing to appear in court on his charges. Yesterday, officers from the 13th Judicial District’s Drug Task Force/Criminal Apprehension Division arrested Cooper again, this time on a felony warrant, with charges of drug and drug paraphernalia possession.

Capt. Jeff Stinson, chief investigator for the UCSO, explained that Cooper was originally charged with possession of instruments of crime because of his possession of syringes used to inject drugs. The residue found in the baggie in Cooper’s home was confirmed to be methamphetamine, prompting Union County prosecutors to amend the charge to reflect that the syringes were used to consume drugs, he said. Stinson confirmed Cooper worked for Murphy USA at the time of his Oct. 6 arrest.

Cooper could face between four and 12 years in prison if convicted on the charges.

A Michael Cooper was listed on Murphy USA’s website as a senior vice president and chief information officer; his information has since been removed.

“We did have a Michael Cooper that was previously employed by us that no longer works for us as an executive,” Moore said, adding that Cooper left the company “a week ago.”

Cooper’s first appearance is scheduled this afternoon at 1:30 p.m. in the Union County District Court.