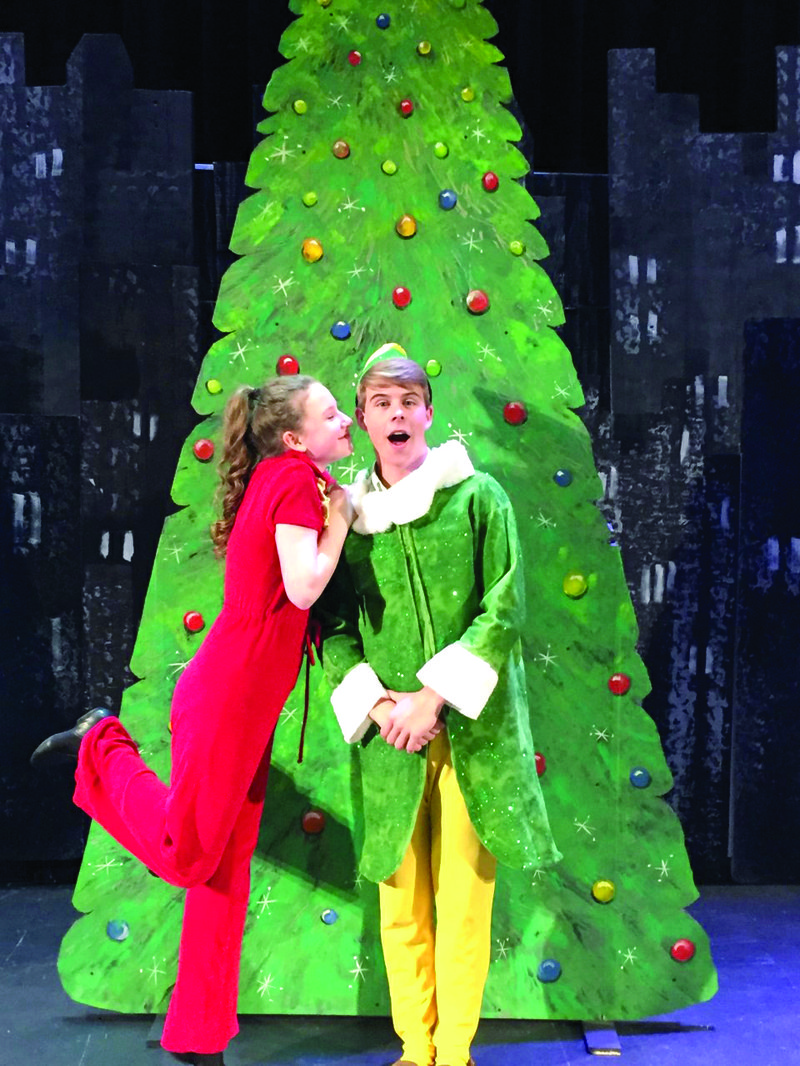 Jovie, played by Hannah Hickman, gives Buddy, played by Clay Evers, a quick kiss on the cheek in front of the Rockefeller Center Christmas Tree during “Elf the Musical Jr.” Both actors are familiar with the PCHS stage and are charter members of Thespian Troupe 8889. A performance of the musical will be held this afternoon at 2 p.m. at the Parkers Chapel School auditorium, and again tomorrow at 2 p.m.

Parkers Chapel students are spreading Christmas cheer by singing loud for all to hear this weekend with two performances of "Elf The Musical JR.," based on the 2003 film starring Will Ferrell.

"What better way to start the holiday season than with "Elf?" said music director Cassie Hickman. "And kids! And music!"

"Elf" tells the story of Buddy, a human who Santa Claus accidentally transported to the North Pole as a baby. Santa and the elves decide to raise Buddy as if he were one of their own, but eventually Buddy's human characteristics make hiding the truth too difficult. Buddy embarks on a journey to New York City to meet his father, but soon learns that his dad is on the naughty list. Buddy makes it his mission to show his family what Christmas is all about, meeting new friends along the way and making believers out of New Yorkers.

"I love it, because it is a Santa Claus movie — with really nothing to do with gifts," director Tracye Couture, a teacher at PCHS, said. "It's about family, relationships."

"Elf The Musical JR." brings music into the fold. PCHS's production includes a cast of more than 44 students, including grades third through 12th from the school district and some home-schooled children, including Hickman's daughter, Hannah, who plays Buddy's love interest, Jovie.

The drama program at PCHS is relatively new, having first been established with a summer program in 2018 and subsequently producing several one-act plays during last school year and holding another summer theater program this summer.

Couture said it was important to her to have all the students that wanted to be involved participate. Even those without musical experience were encouraged to perform, she said, and over half the cast are stage newcomers.

"Every kid that wants to needs to be up there and can be there," she said. "I wanted everybody to have a chance, everybody to see. You see a spark in them."

Hickman and Couture both emphasized the help and support they have received from the community, including the South Arkansas Arts Center. Couture also highlighted the play's set, designed by April Hoover, which includes scenes from New York City like Macy's, the iconic skyline and the Rockefeller Center Christmas Tree.

Thespian Troupe 8889 will continue to grow, Couture said. Students in the Troupe will perform at the downtown Christmas lighting ceremony in El Dorado on Nov. 21, then El Dorado's Christmas parade on Dec. 12. Activities will continue next year.

"I am so blessed to be at a school that knows the importance of the arts, because that's not exactly common these days," Couture said. "The school and the administration know that this is needed for the students."

"Elf The Musical JR." will be staged at the Parkers Chapel School auditorium today at 2 p.m. and again tomorrow at 2 p.m. Tickets cost $5 and may be purchased at the door. Couture recommends arriving around 1:30 p.m. to ensure a ticket. Seating is general admission. The show is appropriate for all ages.

""Elf" is the whole essence of Christmas," Hickman said. "The joy, the family, the friends — what Christmas season should be wrapped up in."