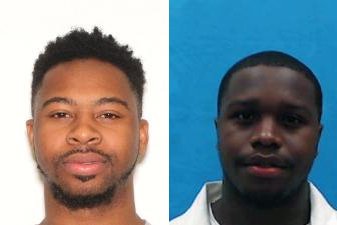 Dominique Davante Alderson, left, and Savionne Sharvon Marbray, right, are wanted on active warrants for aggravated assault, first-degree terroristic threatening and an enhanced penalty for felony with a firearm.

El Dorado police are searching for two men on active warrants, seeking the public's help while warning that the two men are considered armed and dangerous.

Dominique Davante Alderson, 25, and Savionne Sharvon Marbray, 24, are wanted on active warrants for aggravated assault, first-degree terroristic threatening and an enhanced penalty for felony with a firearm.

This is the second instance of El Dorado police issuing a most wanted notice in two days. On Tuesday, police issued a notice looking for Harold D. Burns, Jr., 22, and Harold L. E. Stephens, III, 20, on felony charges of terroristic act, aggravated assault, possession of a firearm by certain persons with an enhanced penalty for felony with a firearm and another enhanced penalty for engaging in violent criminal group activity.

Burns and Stephens are wanted for their alleged involvement in an April 27 incident in which shots were fired at Building 508, 1814 Junction City. They are two of five suspects who have been identified in the incident.