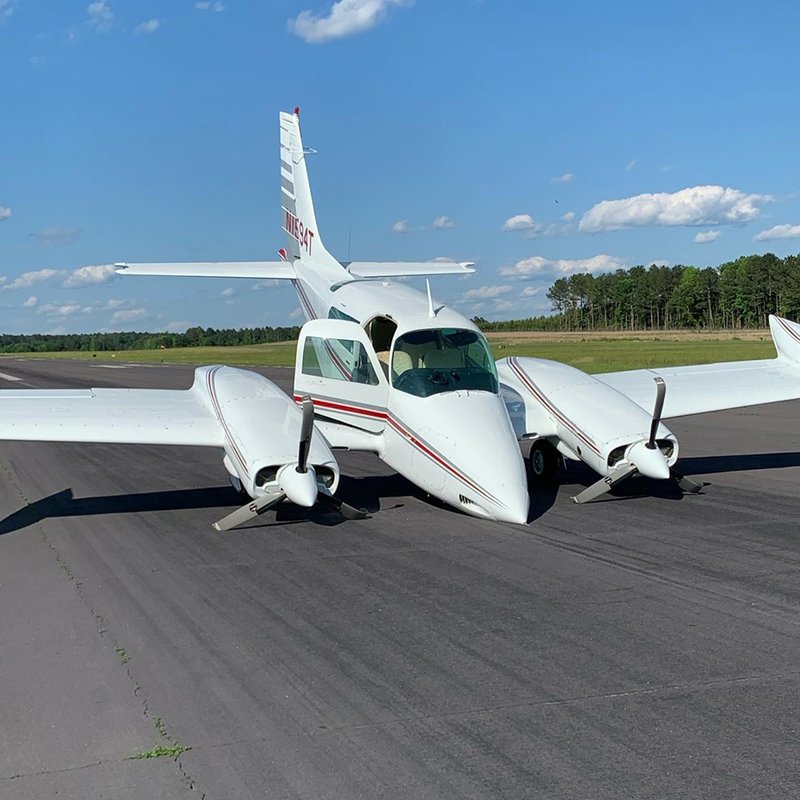 A twin-engine Cessna 310 airplane was forced to make an emergency landing at the South Arkansas Regional Airport at Goodwin Field Monday when its landing gear failed to lock into place.

Goodwin Field airport manager Johnathan Estes said as a meeting of the Airport Commission was about to begin, he received a text message from the plane’s pilot, Ryan Webb.

“They weren’t sweating bullets until they were about two miles out and actually had to land the plane,” Estes said. “It’s just another day of flying.”

El Dorado Fire Chief Chad Mosby said after realizing an emergency landing was necessary, Webb decided to fly around the area until most of the plane’s fuel had burned off in an effort to make the landing safer.

“[It’s] just so if they did have a crash that resulted in a fire, they wouldn’t have a lot of fuel that spilled out,” Mosby said. “It was a text book landing. The pilots did exactly what they needed to do to get the plane down on the ground safely,”

The EFD provides air crash rescue support for the Goodwin Field airport; although it is not common, Mosby said the EFD has provided such support in the past from time to time.

An aircraft rescue truck owned by the EFD is stored at the airport; Mosby noted that the vehicle does not stay manned at all times.

Training for aircraft rescue is very different from typical firefighter training, he said. Those who do the training travel to an air crash rescue school in Baton Rouge to learn how to put out an aircraft fire and manage other emergencies that could occur on a plane.

“Well, you know, ultimately when we get a call that there’s a plane making an emergency landing, the first thing we want to know, obviously, is how many people are on the aircraft. But our hope is that if they follow the emergency procedures that they’ve been trained to follow that they can set the plane down without a catastrophic failure,” Mosby said.

Estes said the plane maintained its main landing gear with only the nose wheel being broken. The malfunction occurred during take off; Webb was unable to retract the wheel and he and airport mechanics realized the gear was broken and an emergency landing was in order.

Webb first reported the incident at 3:18 p.m. After the malfunction was confirmed by mechanics, he and Ham flew for about two hours before making the final descent into their hard landing. By 7 p.m. Monday evening, the Goodwin Field runway was clear and airspace was open.

To land safely, Webb descended slowly, holding the nose of the plane up until the last possible second in order to smooth the landing.

“We knew that we were going to have a ‘wheels up’ landing,” Estes said. “In that procedure, whenever you only have your main wheels, you want to land on your mains … and you keep the nose up off the runway as long as possible, that way you lose as much momentum as you can until the inevitable just happens and you have to put the nose on the runway.”

Along with the EFD, officers from the El Dorado Police Department and Union County Sheriff’s Office also responded.

Estes said the plane’s landing did cause minor damage to the runway, though most of it will probably be able to be addressed in-house at the airport. The runway has quarter-inch gouges where the propellers dug into the runway. The plane itself also received damage.

“I do know that they have to go through that plane from stem to stern now. There was some damage, some visible damage to the propeller and under the nose of the plane, things like that,” Mosby said.

A Cessna 182 flipped Monday morning in Crossett, as well. The Federal Aviation Administration will be in south Arkansas this week to investigate both incidents.