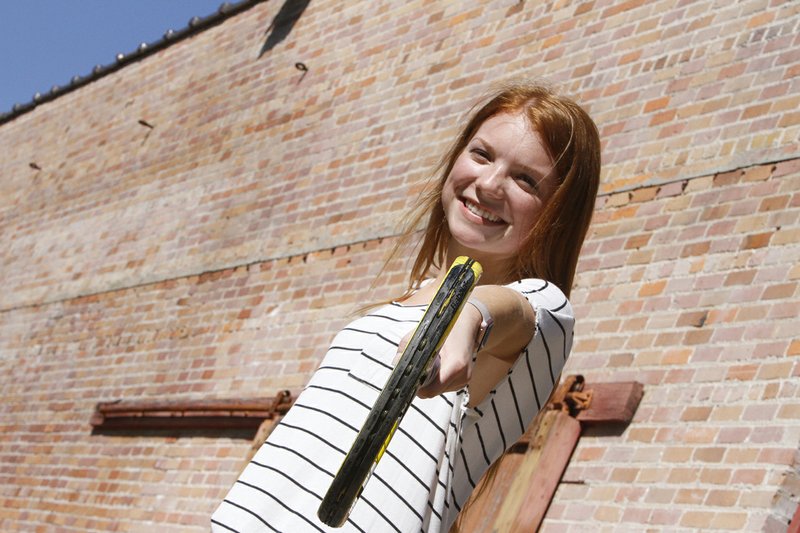 Smackover's Mary-Claire Wilcox, a senior tennis player, is a finalist for News-Times Scholar-Athlete of the Year. She has a 4.102 grade point average. - Photo by Terrance Armstard

Choosing a career can be a daunting decision for most high school seniors. For Smackover’s Mary-Claire Wilcox, it was a no-brainer.

Wilcox, a two-time district champion in tennis, posted a 4.102 grade point average in her high school career, ranking fifth in a graduating class of 89 students. After high school graduation, she will enter Louisiana Tech with 32 college hours on her transcript.

Clearly, she’s ahead in the game, especially when it comes to her course of study.

“Since I was like five and I could say what I wanted to be, I always wanted to be a veterinarian,” Wilcox said. “I’ve always loved animals and wanted to work with them. I like that you’re helping animals and you get to take care of them. Basically, their life is in your hands.”

Wilcox plans to major in animal science at Louisiana Tech and then go to veterinary school.

“They have a really good animal science program,” she said of the Ruston university. “They have their own thing separate from everything else. They have a bunch of hands-on stuff that you can do. I really liked it.”

Wilcox moved to Norphlet from Texarkana, Texas six years ago. Her love of animals began at a young age.

“When I was about 10 or so, we moved to a farm. It was my grandparents’ farm. And, we got cows and ponies and goats and all that. I would help my dad go and take care of them. Ever since then I’ve loved animals,” said Wilcox, who has two Australian shepherd dogs and a standard poodle.

She’s fed chickens and goats and has even milked a cow.

“I’ve done it one time,” said Wilcox, who paused for a quick second when asked if she preferred animals over people.

“I like both,” she answered with a twinkle in her eyes. “It’s pretty even, sometimes animals more. I guess it depends on what day.”

With bright eyes and a perpetual grin, Wilcox doesn’t scream elite athlete when she walks into a room. She ran track as a sophomore and junior before focusing solely on tennis this past season. She teamed with Jordan Price to win the district tennis championship in doubles the past two seasons.

“It was really good. This was the best we’ve done. We got first at district and we made it to the second round at state. We were really excited,” said Wilcox, who said her personality changes in competition.

“I think I’m a lot more aggressive on the court. I don’t really like confrontation in my normal life. But, when I play tennis, I get really competitive and more aggressive, I guess.”

“Mary-Claire Wilcox is the type of player every coach wants on their team,” said Smackover tennis coach Sonia Barker. “She’s a hard-working athlete with a positive attitude and a servant’s heart. She encourages teammates and respects authority. We relied on her as co-captain his year.”

The standout student-athlete admitted she leaned more toward student than athlete.

“I feel like for me, my education will get me further than being an athlete,” she explained. “I feel like I have some natural (athletic) abilities but I still have to work at it to be good.”

Wilcox was always more comfortable in the classroom. She’s as competitive in the books as on the court and knew the precise moment she dropped to fifth in the class.

“I was fourth and then my friend passed me. I had my first ‘B’ ever this year in a college class - AP Lit,” she said with a forced smile. “Our teacher was very tough and we only have a few grades in that class so if you make a B, it’s very hard.

“I didn’t cry but I was very upset at myself. I feel like I could’ve done better.”

“My friend started a group this year and it’s all girls. And, it’s like a Christian group. It’s student run. We try to do a charity every month, have a dinner together every month and do a devotion together,” she explained. “It’s really cool. I think it’s really important. We’re getting God more involved in the school. It’s all girls. I think that’s cool. There’s not many all-girls things.”

Wilcox said she’s not completely immersed into the social network. She doesn’t even have her own Facebook page.

“I get on my mom’s sometimes and stalk people on there,” she said with a laugh.

In addition to becoming a veterinarian, Wilcox said she envisions owning a farm in her future. Her favorite farm animals are goats. She’s raised chickens.

“We ate the eggs. We didn’t eat the chickens.”

Wilcox enjoys hunting although she’s never killed anything. She likes the zoo but, “sometimes it’s kind of sad because they’re kept in cages.”

Wilcox is a girl of many talents and varied interests. But she clearly has a soft spot for animals and can hardly wait to pursue her childhood dream.

“I’m very excited for my future,” she said. “I’m not really in a hurry to get out of high school. But, I’m just ready to go ahead and become a veterinarian and get to that point.

“I’ve never thought about doing anything else.”