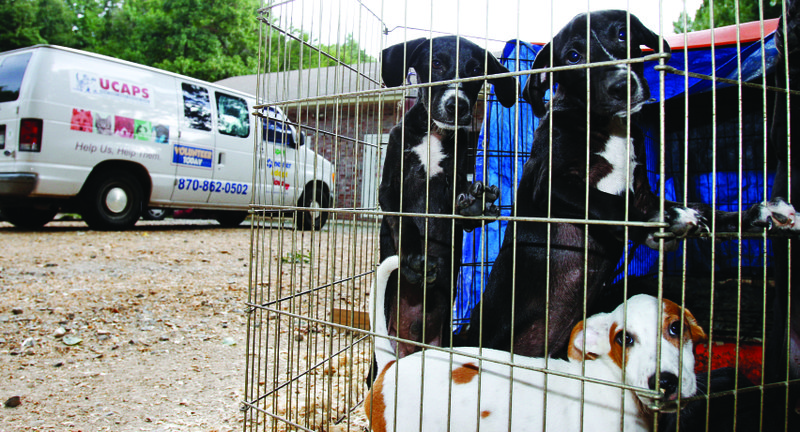 “In the last two weeks, we’ve gotten over 60 animals,” said Angelica Wurth, a UCAPS volunteer. “In the past week, we’ve gotten 47 puppies.”

The UCAPS shelter typically stays at their maximum capacity of 300 animals. Currently, though, the shelter is holding 350 animals, stretching their staff and volunteers very thin.

Wurth said the many recent intakes at the shelter have been animals surrendered by their owners, particularly puppies born because a pet owner did not have their animal spayed or neutered.

“They can’t take any more,” Wurth said. “We’ll still be open our normal hours, but it’s going to be adoption only.”

Because of the overcrowding, UCAPS is unable to accept any more animals into the shelter at this time. Wurth said they need to adopt out at least 50 animals before any more can be taken into the shelter.

Since UCAPS is a no-kill shelter, animals held there are never at risk of being euthanized unless facing serious medical conditions. However, Wurth said overcrowding can have negative effects on animals.

“Imagine walking 350 dogs with only six people (UCAPS staff) every week, or every day,” Wurth said. “It stresses the animals out … and then that makes them less adoptable.”

While several initiatives that could help to alleviate the problem are in the works, Wurth said the most immediate way the community can help is to have their pets spayed or neutered.

“That’s the thing, is actually getting pet owners to spay and neuter their animals,” she said. “We need to be more responsible.”

UCAPS participates in a transport program, where animals at the UCAPS shelter are transported to northern states for adoption. Between 10 and 20 animals are transported out of state each month, but with a cost of $150 per animal transported, the cost can be prohibitive.

“We adopt out probably three to four animals per week,” Wurth said. “At $150 an animal, it’s just hard.”

She noted that enforcement of spay/neuter laws is oftentimes stronger in the states UCAPS transports their animals to than locally.

Wurth said members of the UCAPS Board have met with El Dorado Mayor Veronica Smith-Creer, who expressed interest in their mission. Currently, UCAPS receives $10,000 per year from Union County and no money from the City of El Dorado.

“It’s nice to have someone who wants to listen and learn about the challenges we face,” Wurth said.

In addition to working with local officials, UCAPS staff and volunteers are organizing an education session at their new adoption center on the topic of spaying and neutering pets. While the adoption center, located at 727 E. Main Street, is not yet complete, Wurth said it would be an opportunity for community members to be introduced to the facility.

She said UCAPS recently launched a volunteer program that they are hoping to continue recruiting for. She said volunteers are needed to help present educational sessions, help fundraise and general help with the animals at the shelter.

Those who wish to help UCAPS during this overcrowding crisis have several options. The first is to adopt an animal from the shelter. Adoption costs $150 and includes having the animal spayed or neutered.

For those who can’t adopt, fostering an animal is also an option. Foster families have several options depending on their availability, including short-term fostering, critical fostering (for animals that need critical care, such as very young puppies and kittens or animals with medical problems) and long-term fostering.

“We even have puppies that need to be bottle-fed every two hours,” Wurth said. “They’re just like babies.”

UCAPS is also speaking with local veterinarians about holding low cost spay/neuter clinics or other ways to get more animals spayed and neutered in the community. Wurth noted that Dr. Suzanne Parker, of the Goodwin Animal Clinic, has donated several spay/neuter treatments to UCAPS’ trap-neuter-release (TNR) program.

Started in March, UCAPS’ TNR program has already seen some success. In their first event, the organization humanely caught 15 cats that were spayed or neutered before being released back into the area where they were caught. A second TNR event has since been held.

“We’re just trying to figure out a way to provide spays and neuters cheaper for people in the community,” Wurth said.

The UCAPS shelter will still be open during regular hours, Thursday through Saturday from noon to 4 p.m. No intakes will be accepted, but interested people may still adopt animals during those hours.

“UCAPS strives to serve our community as best as we can. Our mission is to provide care for homeless animals and we cannot do so properly if we continue to accept animals at this time,” said Terra Walker, UCAPS vice president, in a press release. “We want El Dorado and Union County to be a great place to live. Community education on spay/neuter is a must. “

UCAPS will hold their spring Adopt-A-Thon this afternoon, from noon to 4 p.m., at Petsense at 2620 N. West Ave. Food donations will also be accepted at the event. Along with rescue animals available for adoption, including both dogs and cats, the event will have door prizes and raffles available for those who attend.