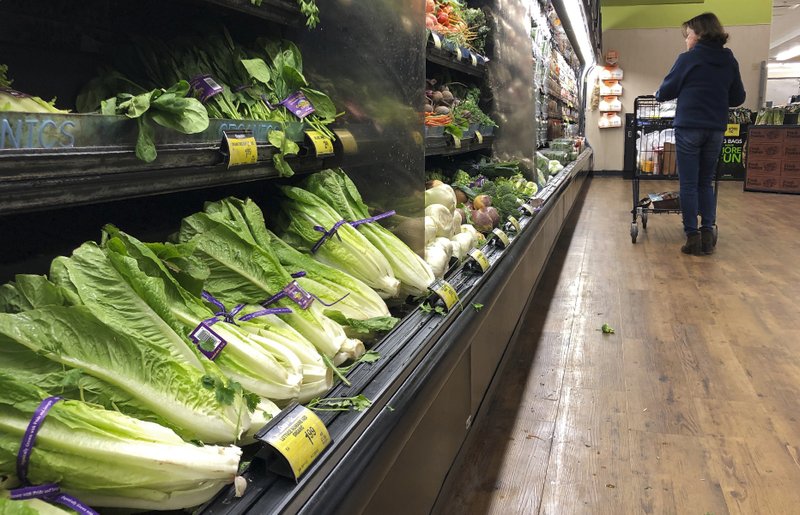 The suggestions come from 23andme, one of the companies offering to point you toward the optimal eating and exercise habits for your genetics. As with most dieting schemes, the idea is appealing because it implies there's an elusive reason why you can't get in shape — in this case, your genes.

But Isaac Kohane, a biomedical researcher at Harvard, said research in the field is still limited and that there's little evidence any small effects from genetic variations can be translated into meaningful dietary advice.

"By and large, these are not giving a lot of value to the people who are purchasing them," he said, adding that other factors play a far bigger role on health, such as how much we eat.

Still, it's tempting to think your DNA holds clues to your ideal diet. To see what my genes might reveal, I tried two services, 23andMe and DNAFit.

If you pay $99 for a 23andMe ancestry report, you can spend $125 more for its health reports based on the same saliva sample.

Among the extras you get are several wellness reports, including one that predicts your "genetic weight" and offers other dietary insights. These findings are based on comparisons to data from other 23andMe customers.

After adjusting the default setting from European to East Asian descent, my report said I'm predisposed to weigh "about average." For a 40-year-old, 5-foot-6 woman, the company defined average as 138 pounds. 23andMe notes that most its customers are of European descent, and that its data for other ethnicities is more limited.

The report then lists 10 habits associated with healthy weights for your DNA profile. For me, that included limiting red meat, avoiding fast food and exercising at least twice a week. Given how formulaic that sounded, I wondered how much results vary for others.

It turns out everyone gets the same 10 habits, since those are the ones 23andMe decided to survey people about. But the order in which they're listed varies to indicate the magnitude of their supposed effect for you. Alisa Lehman, senior product scientist for 23andMe, said the top two habits for most people are limiting red meat and avoiding fast food, as they were for me.

Like many other nutrition studies, the findings do not establish cause-and-effect relationships, but are links the company makes between customers' genes and the survey results.

Other wellness reports said I'm more likely to be lactose intolerant (check), to flush when drinking alcohol (check) and to consume less caffeine (check). They were more interesting because of their specificity, but didn't reveal anything surprising. Another report said my weight isn't likely to be affected by my intake of saturated fat, which is commonly found in meat.

The only surprise was learning I have a genetic variant "common in elite power athletes." When I followed the link, however, I saw about half of customers have the same variant. 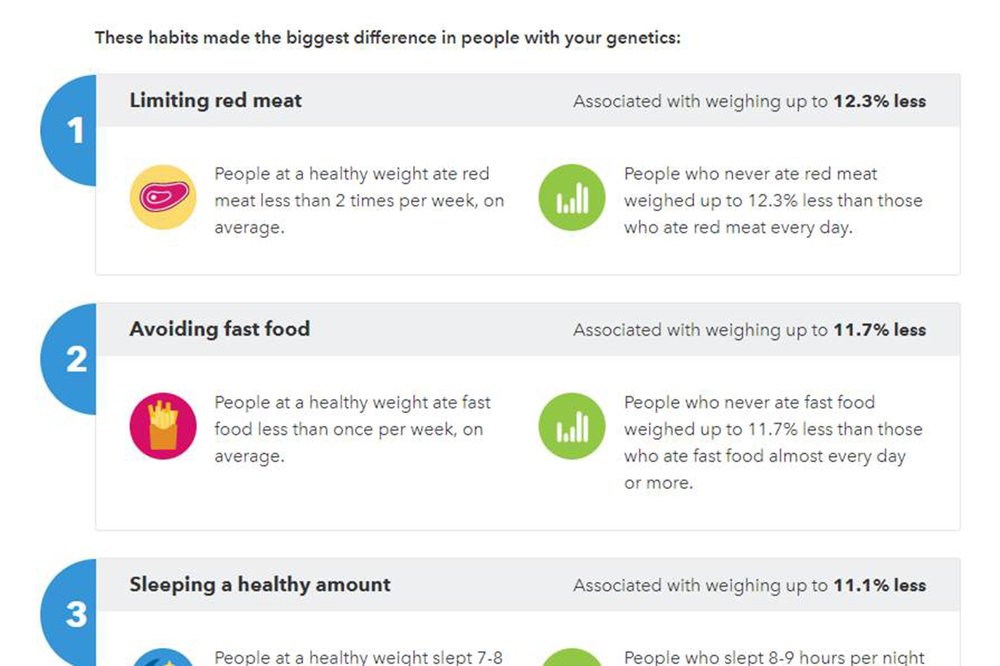 This March 2019 image shows part of the health advice option in a 23andme genetic test. But Isaac Kohane, a biomedical researcher at Harvard, said research in the field is still limited and that there’s little evidence any small effects from genetic variations can be translated into meaningful dietary advice. (AP Photo)

For $99.99, you get a saliva collection to produce reports on a variety of fitness and dietary traits. If you already have your DNA file from 23andMe, you can upload it to get instant results for $79.

DNAFit says its reports are based on the broader universe of scientific research about genes and diet.

Given the general fear of carbs among many dieters, I started with the "carbohydrate sensitivity" report. It started with an overview explaining the difference between complex carbs like brown rice and refined carbs like sugar that are digested more quickly.

After scrolling down, the report said I have a "very low" sensitivity, meaning I'm less susceptible than others to sugar highs and diabetes. Despite this carb tolerance, it suggested I limit refined carbs to 10 percent of daily calories. Again, this sounded like fairly generic advice and made me wonder how much the recommendations vary for others.

Andrew Steele, head of product at DNAFit, said that depending on people's sensitivity, the recommended limit for refined carbs ranges from 6 to 10 percent of total calories. For someone who eats 2,500 calories a day, that's a range from 150 calories to 250 calories.

While that may not seem like a big difference, DNAFit notes cutting back from 10 to 6 percent would mean a 40 percent reduction. Still, the relatively tight range reinforces the idea that dietary advice would be largely consistent regardless of your genes.

Another report said my sensitivity to saturated fat is low, and suggested limiting it to 10 percent of calories. DNAFit said the range for that recommendation is also 6 to 10 percent.

Other reports were more nutrient specific. One said I have a raised need for omega-3, the cholesterol-lowering fatty acid. Another said I have a raised risk for DNA damage from chargrilled meats and should limit them. (This advice was provided over an image of candle-lit steak.)

On the fitness side, the reports said I'm more prone to endurance activities than high intensity activities. I don't know if I'll take this into consideration if I start exercising. Others have questioned the accuracy of the fitness reports, which rated one Olympic runner's aerobic potential as "medium."

DNAFit and 23andMe say knowing your genetic predisposition can motivate you to stick with diet or exercise routines. You may also have specific reasons for wanting to try the services, particularly 23andMe, which most get for the ancestry tests and provides many other reports. But for me, the findings from both felt too broad to influence my habits.

One small note: DNAFit is based in the United Kingdom, so if you decide to try it, you may notice a small currency exchange fee on your credit card statement.