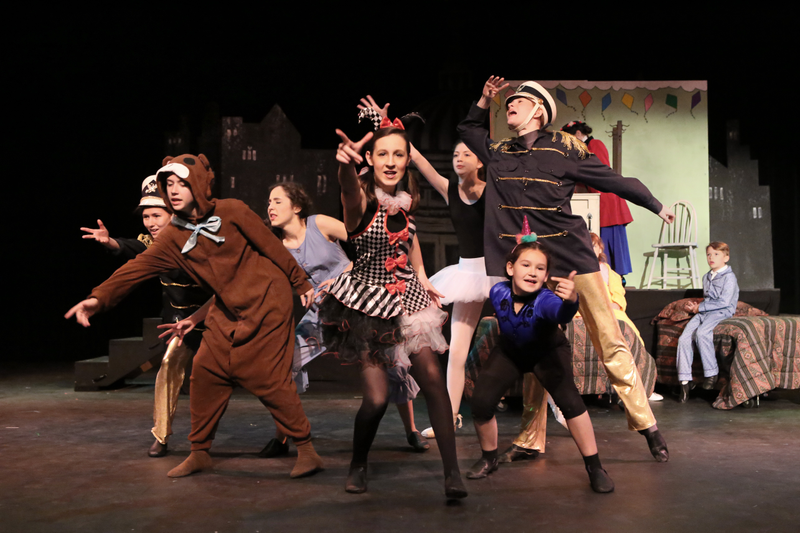 “Mary Poppins” will be performed at SAAC this weekend by the students of the HEART Homeschool group. Tickets for the production cost $5 with all of the proceeds benefiting SAAC.

The HEART Homeschool group is getting ready to put on their seventh production at the South Arkansas Arts Center (SAAC) this weekend.

This year’s production will be “Mary Poppins” with a show tonight at 7 p.m. and two shows tomorrow with the first at 11 a.m. and the second at 2 p.m.

Lynn Gunter, who is directing the production, said one of the big challenges with the production has been replicating a scene where dishware falls off the shelves before springing back in place. However, they’ve found a way to make it work.

“Where the plates fall off and the cups fall down and in the middle of a song Mary Poppins goes ‘Right yourself please’ and they magically go back up,” Gunter said. “Bob Stevenson is the man. I told him that I have a dream with “Mary Poppins” of wanting this scene and I expected him to say ‘um, that’s a no’ but he didn’t. It’s one of those things were if it gets off track or if somebody’s been playing with the wire or made it loose, it may not work.”

Part of what Gunter wanted to do with the production is find a mix of the Walt Disney version of “Mary Poppins” and the original P. L. Travers books. She said there were parts of the original story, which were included in the Broadway production, that Disney didn’t want to include because they were a little darker than he wanted. She said this caused a bit of a rift between Disney and Travers.

Gunter said she’s a big Disney fan, which is part of way they decided to do “Mary Poppins”.

“There was a conflict there because I admire (Travers) as well,” she said. “They fought for 20 years, he kept trying to get the rights to the movie and she said no. It didn’t end well, she was unhappy with how he did it.”

Travers had a specific way she wanted the production told, as well as the character of Mr. Banks. The man who got the rights from Travers to put on the Broadway play listened to what Travers wanted to argued with Disney about some of the things he wanted taken out.

“I love marrying these two worlds together,” Gunter said. “You still have ‘Supercalifragilisticexpialidocious.’ You still have the white jolly holiday dress that everyone expects her to be in and the red and slightly orange and white striped coat. You still have a lot of the iconic things you would expect, but then you get a little truth of what I hope P. L. Travers would go ‘thank you’ for.”

The group started working on the production in January, with every actor in it being a homeschool student. The students had about 10 weeks to get the production up and running with only a few hours to work at SAAC each week.

“They had to learn a lot of it at home,” Gunter said. “There’s no way to get it all done here. They all gave up their Spring Break and worked four hours a day for four days.”

Gunter said they normally have a couple weeks after spring break to keep working on it, but the way the schedule fell this year it is having to come right after instead.

This year, Gunter has over 40 students participating, which makes the backstage crowded. On top of students playing all the characters, they’re also doing the set changes, which frequently take place mid-scene.

“There’s just something moving all the time,” she said.

The students put on a cut-down version of the show for students at Retta Brown yesterday morning, which Gunter said went over extremely well. She said they were engaged with the story.

“They laughed, they clapped, they got mad at the villain,” Gunter said. “There was no villain in “Mary Poppins” the movie, but there was a villain in P. L. Travers book. It’s Mr. Banks’ old nanny. She does it just right. She’s a villain you love to hate.”

Gunter said the group has traditionally put on the production for free, but this year will be charging $5 for a ticket. The money is being donated to SAAC out of appreciation for what SAAC has done to help the group over the years and what SAAC offers to the community.

“Every year, SAAC has done more to help me,” she said. “They’ve trained me. The fact that we’re here with the extra noise. We’re going to give it all back to SAAC. That’s important to me because my daughter has grown up doing ballet here. They do classical ballet so she has learned classical ballet, but she’s also learned classical movie. Composers are mentioned, the name of the piece is mentioned and she remembers it. I’m glad she does. There’s so much that my children have gotten out of SAAC that it makes me even happier that we’re giving back.”