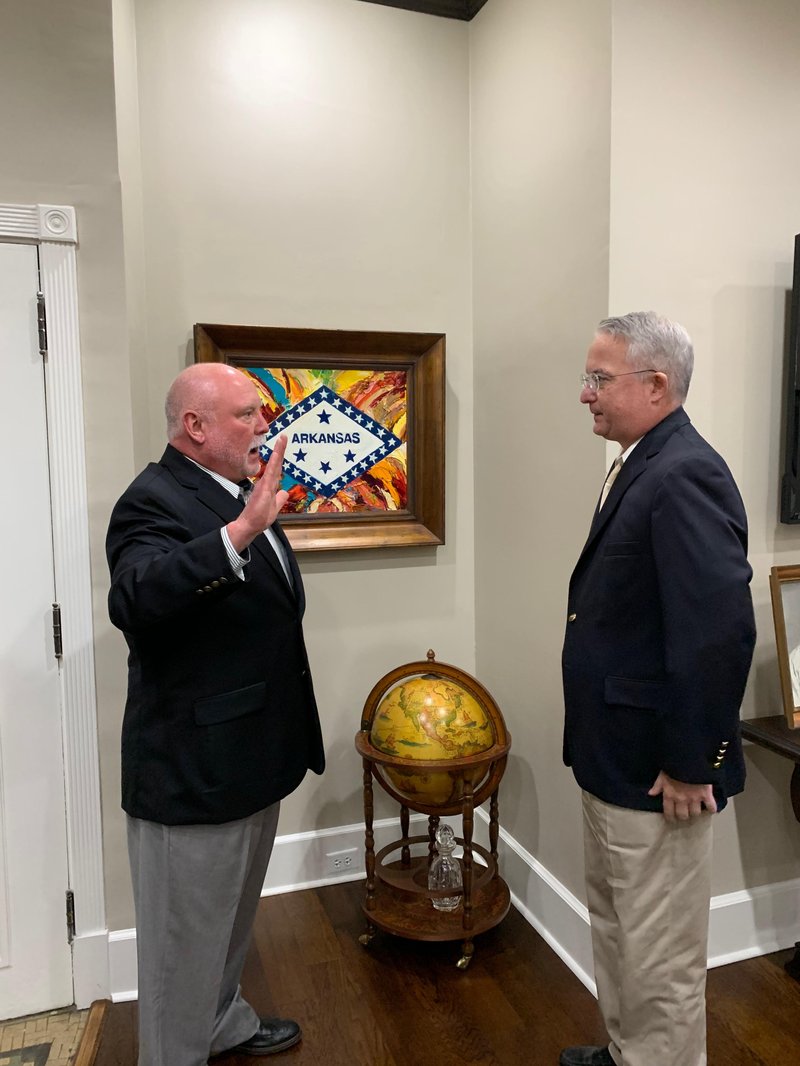 Bill Luther, left, is sworn into the State Board of Election Commissioners by Judge Robin Carroll.

El Dorado-Union County Chamber of Commerce President and Chief Executive Officer Bill Luther was appointed to the State Board of Election Commissioners recently, bringing a lifetime interest to the position.

“It’s great. I’m so grateful and honored by the Speaker of the House, Matthew Shepherd, appointing me,” Luther said.

The board is made up of seven members appointed by different government officials. Gov. Asa Hutchinson appoints two designees, both major parties in the state, Republican and Democrat, appoint one designee each, the speaker of the House and the Senate president pro tempore each appoint a designee and Secretary of State John Thurston rounds out the board.

Luther, who was also a 2018 mayoral candidate, was appointed by Speaker of the House Matthew Shepherd, R-El Dorado. Shepherd said Luther was the natural choice for the position.

“I’ve known Bill for a number of years and I’ve known that … maintaining fair elections is important to him,” Shepherd said. “I believe it’s something that he has really taken an interest in and so when that opening arose ... Bill was the first person that came to my mind.”

Luther first became interested in elections as a child, after seeing his father dedicate himself to ensuring free and fair elections in Madison County, where Luther grew up.

“I was 6 or 7 years old … and my father was one of the few Republicans in the county. So it’s all Democrat races and he was the only one they trusted to count the votes,” he said. “He would always count votes on election night and there was a Dairy Queen across the street from the Madison County Courthouse and mom would take my brother and me to wait on him to come out … In the old days, they posted the results as they came in on a big board that was on the courthouse square. Well, they posted the results and there was a big cheer that goes up … and then all of a sudden, there was a brawl. There were 20 or so men fighting and rolling around on the ground. So I turned to my mom – remember, I’m 6 years old – and I asked her ‘mother, why are those men fighting?’ And she just matter of factly said ‘it’s election night, honey.’ So that was my first time that I learned that elections can’t be orderly if they’re considered to be unfair. That was my genesis for being interested in elections.”

Luther has a long history of working on elections, too. When he moved to El Dorado, he became a poll worker, helping voters use Union County’s voting machines and cast their ballots.

After that, he was a Republican member of the Union County Election Commission for three years.

He was appointed by the State Board of Election Commissioners to be an election monitor following that, monitoring four separate elections to ensure procedures were carried out correctly and the election was fair.

“I took their little training class, passed the test and was certified to serve as an election monitor,” Luther said. “Writing reports – I recall one of them being 130 plus pages, and I think the shortest one was 69 pages. An election monitor observes and reports what they see and reports back to the Election Commissioners.”

As a member of the Board, Luther will be responsible for promoting fair and orderly election procedures by developing resources to educate county election administrators, conducting statewide training of county election officials, monitoring compliance by local election authorities and investigating complaints of alleged election misconduct.

“I’d early on spoken to Matthew (Shepherd) about an appointment, maybe from the governor, and I’d submitted my application,” he said. “I was honored when Matthew decided to appoint me.”

Luther said he hopes to do more to get people interested in voting and elections. One goal he has is to get more young people to the polls, both as voters and poll workers, and in positions related to elections.

“I would hope I could be instrumental in getting younger people, millennials, interested in the process,” he said. “It’s all computer voting now and a lot of the old election workers are going away.”

He said he would also like to see businesses allow their employees time off to participate in the election process.

“One thing, if we could get businesses to allow their employees to attend poll worker training and then work the polls on Election Day,” Luther said. “This is our basic right to have a voice in our government and we need to take it seriously. And if we could get the millennials interested and the businesses they’re employed by to support that [it would be good].

Currently, the State Board of Election Commissioners is investigating an election for a Justice of the Peace position that took place in Union County in 2018. Luther did not indicate whether he would have a role in the investigation.

To learn more about the State Board of Election Commissioners, visit arkansas.gov/sbec.