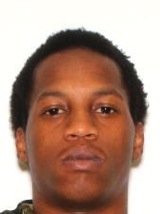 Investigators with the El Dorado Police Department are urging the public to inform them of sightings of Diamonte D. Williams-Webb, 22, a suspect in a March shooting incident.

According to their police report, an EPD officer responded to reports of a possible shooting near Robinson and Thompson Streets shortly before 3 p.m. on March 24.

A witness advised the officer they’d heard approximately six gunshots and saw someone running away shortly before they arrived; the officer spotted the running person and was able to make contact, finding that they were the shooter’s target.

The officer spoke with the fleeing victim, who said an acquaintance, driving, had approached him to accuse him of stealing a firearm, threatening to kill him before driving away. The victim said he continued walking down the road when his acquaintance’s vehicle re-appeared; two men got out of the car and started shooting at him.

On May 29, Savionne Marbray, 24, of El Dorado was served with a warrant in connection with the incident while incarcerated at the Union County Jail for a separate incident.

The EPD’s investigation is ongoing as they continue to evaluate clues and potential additional suspects.

Police are now seeking Williams-Webb, suspected of committing a terroristic act with a firearm.

Anyone with information on Williams-Webb’s whereabouts is urged to contact Detective Angela Means of EPD’s Criminal Investigations Division at 870-881-4810 or Crime Stoppers at 870-863- INFO.

Information leading to Williams-Webb’s arrest could result in a reward of up to $1,000. All calls will be kept confidential.