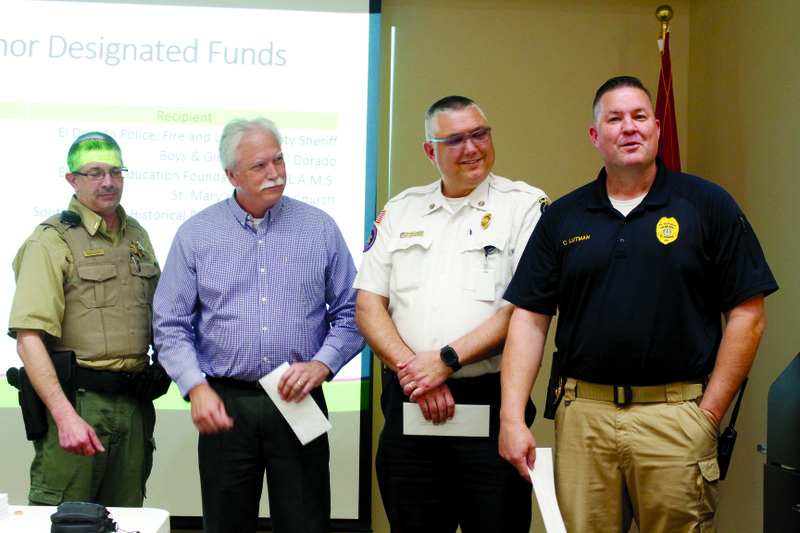 The event, which was held at the South Arkansas Community College Library, recognized groups that work to provide services to Union County residents.

As part of the event, UCCF board chairman Rodney Landes announced the addition of a new fund that goes specifically to first responders. The First Responders Fund of the UCCF has been created by an anonymous donor to benefit the El Dorado Fire Department, the El Dorado Police Department and the Union County Sheriff’s Office.

The $2.1 million fund will grant approximately $100,000 each year to split equally between the three departments. Landes said the fund is not something that needs to be used every year, as the departments could roll it over to the next year based on needs. The money will go mostly to equipment and gear at the departments.

“This is money we use outside our budget as far as our general budget,” said Union County Sheriff Ricky Roberts. “It allows us to buy vests. Every five years, a police officer’s vest is null and void. … Some other things we’re looking at as far as in the jail, some programs we’re going to start enacting in the jail. This is just a great opportunity for us.”

Fire Chief Chad Mosby echoed the same point of using the money to help fill in spots the department can’t fill through the budgetary process.

“It’s not nice-to-haves, it’s need-to-haves,” Mosby said. “Unfortunately, when we get to the budget, those things get cut out. It makes not only our guys safer, but makes the community safer as well.”

Another one of the designated donor funds that UCCF gave out is the Youth of the Year award through the Allie Johnson Persistence of the Spirit Fund. This year’s recipient was Ty’Ree Kendrick.

“My personal brand is underrated,” Kendrick said. “It means to never underestimated or doubt anybody has the potential to be successful in life. It helps me and it helps my peers through this brand.”

The El Dorado Education Foundation received funds from the Madelyn M. & Edward C. McCarty Fund for the Girls Learning About Math and Science (GLAMS) program, which is a one-day annual event connecting eighth grade girls with women in math and science fields. This year has 276 girls already registered for this year’s event.

The Proctor Mill Memorial Fund went to St. Mary’s Episcopal Church for programs in the community, such as offering food and clothing to the needy, and the South Arkansas Historical Preservation Society for educational programs.

The Sarah A. Norris Fund went to Barton Library and the Union County Public Library System to help grow the libraries’ collections of books.

In addition to the designated donor funds, the UCCF is in control of giving out a number of grants from its Union County Community Trust, which is made up of money donated by the community. Landes said that account is just shy of $1 million and is used to fund grants for nonprofits. This year, 29 grants were given out.

• Economics Arkansas — $1,799 for professional development trainings and programs for prek-12 teachers from Union County and environs.

• Fairview Community Development Association, Inc. — $1,000 for Give a Kid a Chance.

• KidsNGolf — $1,500 for Mentoring and Family Support through Golf.

• The Compassionate Friends of South Arkansas — $1,350 for chapter development and outreach.